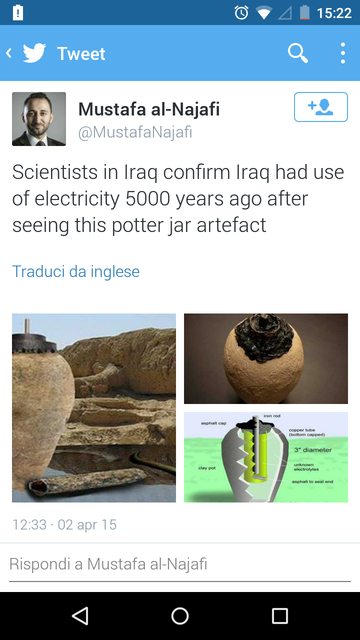 In 1938, Wilhelm Konig, the first to analyze them, investigated these objects, and wrote a paper (Ein galvanisches Element aus der Partherzeit? In: Forschungen und Fortschritte. Heft 1, Nr. 14, 1936, S. 8â€“9) in which he speculated that the objects had been used as a battery. It appeared to be backed up by independent tests by Willard Gray and Arne Eggebrecht (independent of each other), which used reproductions to generate about two volts. Eggebrecht claimed to have used the reproductions to electroplate metal; according to this,

A 2,200-year-old clay jar found near Baghdad, Iraq, has been described as the oldest known electric battery in existence. The clay jar and others like it are part of the holdings of the National Museum of Iraq and have been attributed to the Parthian Empire â€” an ancient Asian culture that ruled most of the Middle East from 247 B.C. to A.D. 228. The jar itself has been dated to sometime around 200 B.C.

15
Did the Swiss not produce anything of importance aside from cuckoo clock?
45
Was the name "Wendy" created for Peter Pan?
11
Did 2.5 million Americans serve in the Afghanistan and Iraq wars from 2001 to 2013?
4
Did people use to urinate everywhere at fancy balls?
20
Did Lyndon Johnson have an amphibious car?
33
Did humans almost become extinct about 70,000 years ago?
3
Did 30 U.S. Marines die in a helicopter crash between January 24th and January 27th, 2020?