Can bouncing batteries tell you if they are charged or not?

I saw this article this morning, and while it seemed fairly legitimate, I was skeptical about it. The claim is that if you drop a battery (flat end down) it will bounce higher/longer if the charge is gone then if it's fresh.

I figure if I had a volt-meter or the like I could probably test this myself, but I don't. A bit of googling didn't provide any results that I had a high amount of confidence in.

Yes, bouncing batteries tell you if they are charged or not. 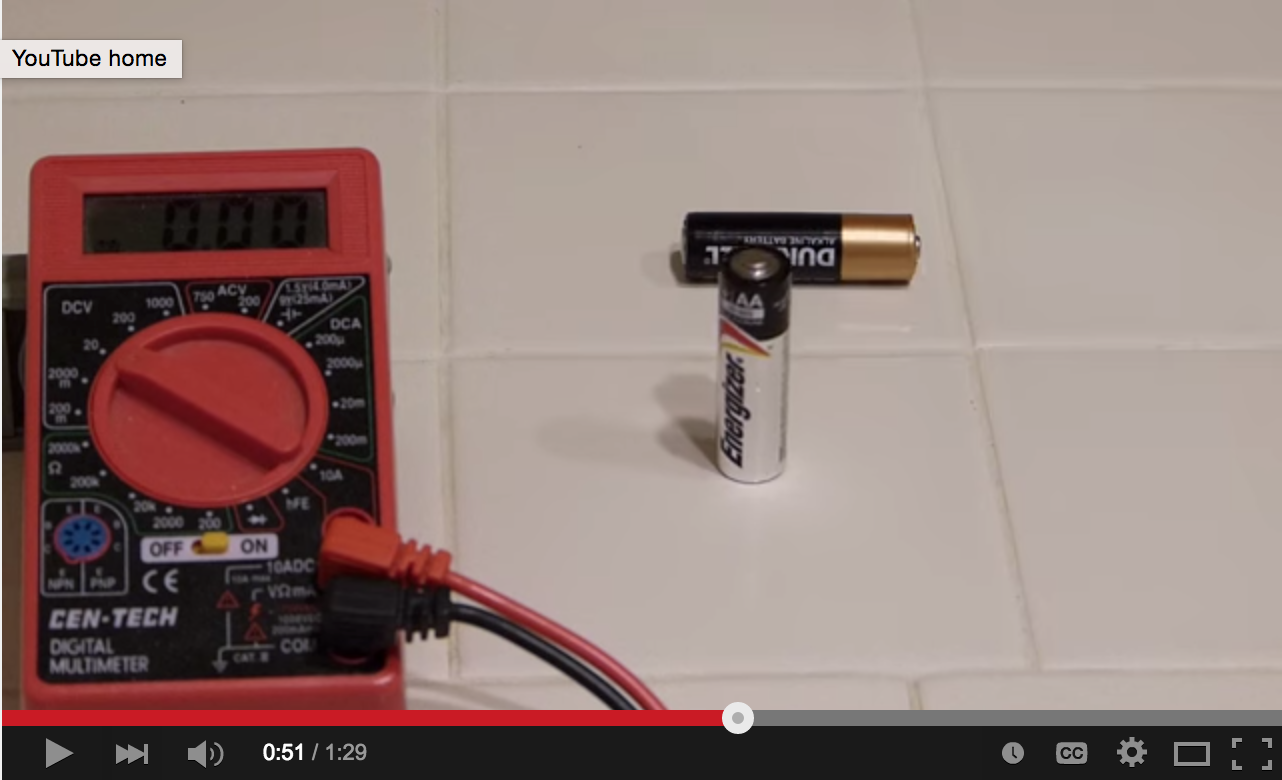 How To Test a AA battery, Easiest Way For Any Battery Fast, Easy!

After it went viral, scientists in the US have been curious, and later they confirmed that a simple bounce test can be used as a technique if a battery is charged.

A team led by Daniel Steingart of Princeton University, published their paper here, you can read it here.

As quoted by the study:

Recently there has been popular interest in the tendency of an alkaline AA battery to bounce after being dropped on its end when discharged to full capacity, compared to a flat landing with minimal bounce when the battery is “as-received”. In this paper the coefficient of restitution (COR) of an alkaline AA battery is measured at various depths of discharge by dropping the battery in a controlled fashion and observing the subsequent bouncing, and the change in COR is then compared to spatially resolved energy-dispersive X-ray diffraction (EDXRD) that was performed in situ on equivalent alkaline AA batteries. Our measurements show that this simple bounce test provides a considerable amount of information of the structure of the battery's Zn anode, rivaling the sensitivity of in situ EDXRD in detection of ZnO formation.

According to scientificamerican.com, Daniel Steingart said:

We needed XRD to explain why the bounce changes this way, but once the correlation is made, a secondary school physics experiment can indicate where and how reactions are occurring in the battery.

This paper Bouncing Alkaline Batteries: A Basic Solution confirms the causal link between battery bounce characteristics and state of charge for selected battery chemistries and describes the mechanism imvolved. They say:

It definitely works for Alkaline batteries, which is what the detailed explanation relates to. THe probable reasons are well explained by the information provided by georgechalhoub. I'm just adding the observations of an experienced competent professional observer [tm] :-).

I am an electrical engineer with a Masters degree in EE and 50+ years experience with electronics. (Yes, we did have electronics "way back then"). I, too, was extremely sceptical when I read of this phenomenon. However, testing with dozens (probably ~= 50) of AA Alkaline batteries of a number of brands and states of charge showed and extremely large difference between fully charged and well used batteries. I did not carry out extensive tests with varying degrees of use - batteries here tend to be new, moderately well used or well used. Flattened to within a few mAh of their life tend to be thrown out asap.

As a means of sorting through a bag of mixed batteries to find unused ones this method works superbly. It is probably no quicker than using a test meter, bt hard flat surfaces are often easier to come by than multimeters "in the field".

Here are a series of reasonably well done experiments and battery dis-assemblies in a you tube video. This appears convincing but, of course, could be "cooked" if anyone wanted to spend the very extensive effort required to falsify results. There is no good reason to disbelieve what is shown here, but it's not peer reviewed and doesn't have a recognised institution name on it.

Not the answer you're looking for? Browse other questions tagged physics battery .

98
Can bullets fired into the air kill a person when they fall?
38
Can you recharge non-rechargeable alkaline batteries?
7
Should we remove batteries from electronic devices when not in use?
25
Can you melt gold in a regular campfire?
18
Can you recharge a phone battery in the microwave?
30
Can the health of an alkaline battery be determined by bouncing it?
7
Can Lithium Ion batteries explode or self ignite?
9
Are nano diamond batteries a breakthrough in battery technology?