Did GamePro make up the story of the arcade game Polybius?

The story goes that an arcade game called Polybius was market tested around Portland in 1981, but it was pulled because it had adverse psychological effects on those children who played it. Even darker rumors claimed Men in Black were seen collecting the profits from the machines.

Okay, this arcade game probably never existed. No compelling evidence for its existence has ever been presented.

But where did the urban legend come from? The oldest reference I could find to it is in a 2003 issue of GamePro Magazine. Did GamePro make up the whole story then, or was there a real urban legend that preceded it? Anybody know if GamePro ever came clean, or if the urban legend is documented prior to 2003? 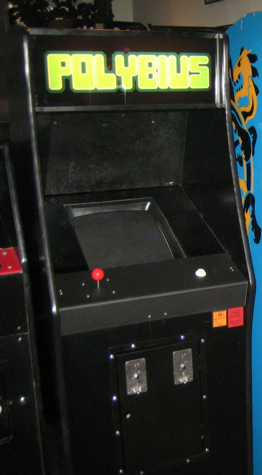 It has been suggested that a person by the user name of "cyberyogi" or "CYBERYOGI=CO= Windler" made up the Polybius story as an April Fool's joke. I believe the rumor is that he posted it on Usenet, but I have not seen this purported original post. Cyberyogi is German, and his real name is Christian Oliver Windler. Here is some of him on the web:

Now, I've never emailed him and asked if he made up the Polybius myth. But if any person was so inclined to get to the bottom of this urban legend, I would recommend doing just that very thing...

The Snopes.com take on this is

No arcade game called Polybius induced amnesia, caused gamers to wake up screaming in the middle of the night, or attracted the attention of mysterious "men in black" who periodically came to "collect records" from Portland-area machines. This one is just a gag someone invented several years ago which has now become enshrined on the web, another version of the conspiracy rumors involving military intelligence agents visiting arcades to collect stored information from game consoles which date to at least the early 1980s.

GamePro looked in 2003 and found the evidence inconclusive:

Using games for military training is one thing; using games for mind control...well, that's something else. But there is a cryptic tale of an arcade game called Polybius that appeared in only a handful of locations in Portland, Oregon in the early 1980s. Credited to a company called Sinnesloschen, Polybius (named for a Greek historian who also dabbled in cryptography) was an abstract puzzle game that reportedly caused nightmares and memory loss in those who played it ("Sinnesloschen" is German for "sense-deleting"), and some supposedly swore off games for good. And to seal the deal, one arcade owner claimed that black-coated gentlemen would periodically come to collect data-but not coins-from the machines. Unfortunately, the main thing that's missing is proof.

Not the answer you're looking for? Browse other questions tagged videogames .

8
Is Tetris by Electronic Arts the best selling video game on mobile?