Does exercise make you healthier?

It is widely believed that regular exercise helps people become fitter, stronger and healthier. For example, from Physical Activity Guidelines for Americans:

Indeed, there is plenty of evidence that exercise is correlated with lower incidence of various diseases.

However, it could be that people who are born naturally healthy (and have a genetically lower risk of these diseases) also are genetically coded to have more energy, and therefore exercise more.

Put another way, somebody who is sick and tired all the time is less likely to exercise, but this doesn't mean the lack of exercise caused their illness.

Is there any convincing evidence that this is a causal relationship from exercise to health, e.g. from randomized controlled trials? I am not interested in observational studies that show people who exercise are healthier - that much is very clear. I am interested in studies that prove that exercise directly causes health benefits such as those claimed above.

taking away your stress

exercise is proven to increase concentrations of norepinephrine, a chemical that can moderate the brain’s response to stress.

usually within five minutes after moderate exercise you get a mood-enhancement effect.

and improving your self-confidence

regardless of weight, sexual orientation, gender, or age, exercise can quickly elevate a person's perception of his or her attractiveness: self-confidence and self-worth.

exercising boosts the chemicals in the brain that support and prevent degeneration of the hippocampus, an important part of the brain for memory and learning, which would prevent Alzheimer.

we all are addicted to something, right? Whether it is drugs, alcohol, internet, food or sex, exercise can help in addiction recovery

and unleashing your creativity

It is reported that one gym session can boost creativity for up to two hours afterwards.

and reducing the chances of developing heart disease, stroke, and diabetes

It is reported by over 11 scientific articles that bicycling and walking reduce your chance of getting all those diseases.

and making you lose weight

you don't need evidence for that? do you?

regular physical activity can help you fall asleep faster and sharpen your sleep.

and lowering risk of all the following

Weight-bearing exercises, like running, walking and weight-lifting, help lower your odds of getting osteoporosis as you grow older

and reducing the severity of asthma

swimming is one of the best exercises for people with asthma, exercise helps in fewer or milder asthma attacks overall and a need for less medication.

and promoting a healthy pregnancy

Relaxation exercises and Kegel exercise that strengthen the pelvic muscles and back exercises are all important for pregnant women.

and having anti-ageing effects

exercise might be the best anti-ageing pill according to many scientists.

and improving your sex life

The medical research points towards it: the fitter you are, the better your sex life is.

from recent report by the American Journal of Clinical Nutrition.

there is no evidence that exercise makes you healthier at all.

The OP updated his question saying he's asking about causation and not correlation.

1) there is a lack of evidence that a causal link between physical exercise and good mental health exists.

This book called Workplace Health: Employee Fitness And Exercise provides a great summary to a series of studies which concluded that there is a lack of causal relationship between physical exercise and mental health. 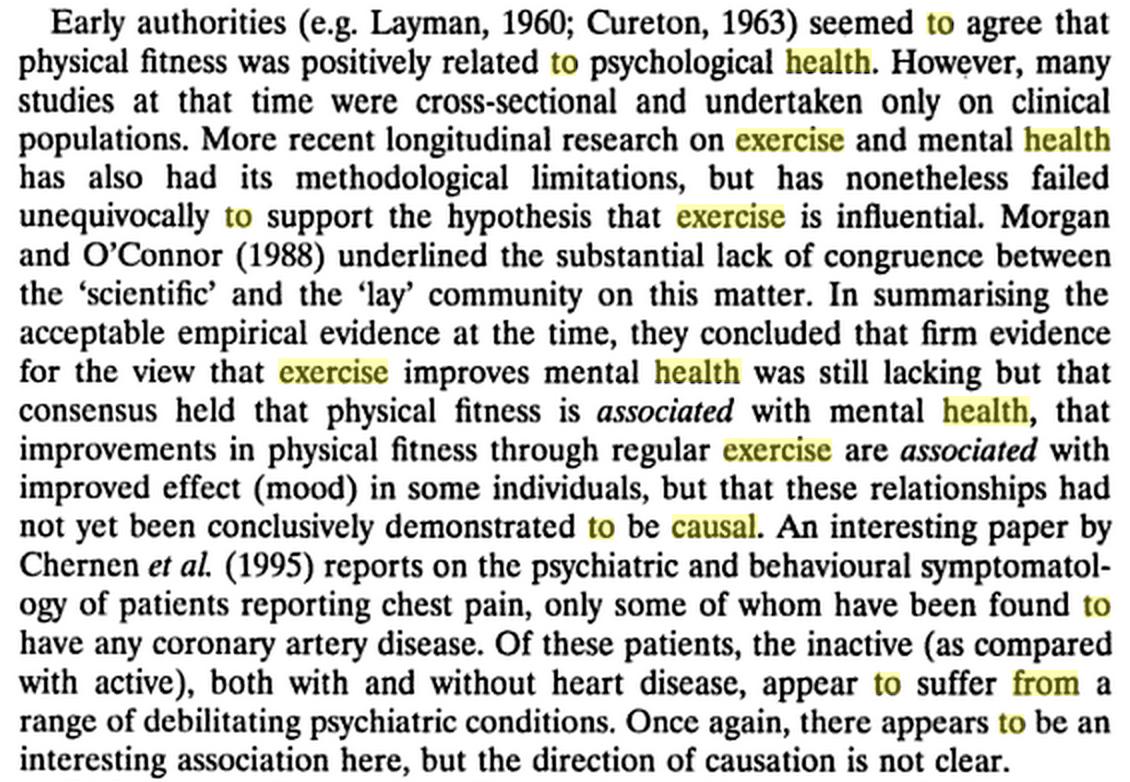 In another large cross-sectional research(1), scientists and researchers were able to prove that physical exercise is correlated with lower risk of depression, however, fortunately for people against physical exercise, they couldn't prove a causal link between the two, researchers said they:

NHS blogged about the study and said:

In general, this study adds to the evidence that exercise is good for mental health, although in isolation it does not prove a causal link between the two. It should be discussed in the context of what else is known about the benefits of exercise.

Digging deeper, I found that, according to a governmental report:

2) there is a causal link between physical exercise and reduction in risk in all-cause mortality, all CVDs combined, CHD, hypertension, colon cancer, and NIDDM.

The studies reviewed in this chapter indicate that physical activity is associated with a reduction in risk of all-cause mortality, all CVDs combined, CHD, hypertension, colon cancer, and NIDDM.

To evaluate whether the information presented is sufficient to infer that these associations are causal in nature, it is useful to review the evidence according to Hill’s classic criteria for causality (Hill 1965; Paffenbarger 1988).

Strength of Association. The numerous estimated measures of association for cardiovascular outcomes presented in this chapter generally fall within the range of a 1.5- to 2.0-fold increase in risk of adverse health outcomes associated with inactivity. This range represents a moderately strong association, similar in magnitude to the relationship between CHD and smoking, hypertension, or elevated cholesterol. The associations with NIDDM, hypertension, and colon cancer have been somewhat smaller in magnitude. The difficulty in measuring physical activity may lead to substantial misclassification, which in turn would bias studies toward finding less of an effect of activity than may actually exist. On the other hand, not controlling for all potential confounders could bias studies toward finding more of an effect than may actually exist. Efforts to stratify studies of physical activity and CHD by the quality of measurement have found that the methodologically better studies showed larger associations than those with lower quality scores (Powell et al. 1987; Berlin and Colditz 1990). In addition, cardiorespiratory fitness, which is more objectively and precisely measured than the reported level of physical activity, often is also more strongly related to CVD and mortality. Measures of association between physical activity and health outcomes thus might be stronger if physical activity measurements were more accurate. Consistency of Findings. Although the epidemiologic studies of physical activity have varied greatly in methodology, in ways of classifying physical activity, and in populations studied, the findings have been remarkably consistent in supporting a reduction in risk as a function of greater amounts of physical activity, or conversely, an increase in risk as a function of inactivity.

Temporality. For most of the health conditions included in this chapter (all-cause mortality, CVD, CHD, hypertension, NIDDM), longitudinal data from cohort studies have been available and have confirmed a temporal sequence in which physical activity patterns are determined prior to development of disease. For obesity and mental health, fewer longitudinal studies have been conducted, and findings have been more equivocal. Perhaps the strongest evidence for temporality comes from two studies of the effect of changes in activity or fitness level. Men who became more active or more fit had a lower mortality rate during follow-up than men who remained inactive or unfit (Paffenbarger et al. 1993; Blair et al. 1995).

Biologic Plausibility. Evidence that physiologic effects of physical activity have beneficial consequences for CHD, NIDDM, and obesity is abundant (see Chapter 3, as well as the biologic plausibility sections of this chapter). Such evidence includes beneficial effects on physiologic risk factors for disease, such as high blood pressure and blood lipoproteins, as well as beneficial effects on circulatory system functioning, blood-clotting mechanisms, insulin production and glucose handling, and caloric balance.

Experimental Evidence. Controlled clinical trials have not been conducted for the outcomes of mortality, CVD, cancer, obesity, or NIDDM. However, randomized clinical trials have determined that physical activity improves these diseases’ risk factors, such as blood pressure, lipoprotein profile, insulin sensitivity, and body fat.

The information reviewed in this chapter shows that the inverse association between physical activity and several diseases is moderate in magnitude, consistent across studies that differed substantially in methods and populations, and biologically plausible. A dose-response gradient has been observed in most studies that examined more than two levels of activity. For most of the diseases found to be inversely related to physical activity, the temporal sequence of exposure preceding disease has been demonstrated. Although controlled clinical trials have not been conducted (and are not likely to be conducted) for morbidity and mortality related to the diseases of interest, controlled trials have shown that activity can improve physiologic risk factors for these diseases.

From this large body of consistent information, it is reasonable to conclude that physical activity is causally related to the health outcomes reported here.

Cureton, T. K. (1963) Improvement of psychological state by means of exercise programs. Journal of the Association for Physical and mental rehabilitation, 17, 14-25.

Not the answer you're looking for? Browse other questions tagged disease physical-fitness causality .

12
Does physical exercise control diabetes?
16
Does regular exercise improve how you feel?
14
Does exercise make you smarter?
19
Is electric muscle stimulation (EMS) training safe and effective?
10
Is non-ionizing radiation known to cause any health issues?
5
Does exercise affect the number of muscle cells?
7
Are the methods and conclusions of the study "Clear connection between wireless devices and cancer, experts say" sound?
3
Does exercise trigger migraines?