Is profanity correlated with trustworthiness and honesty?

This image can be found on 9GAG and Facebook: 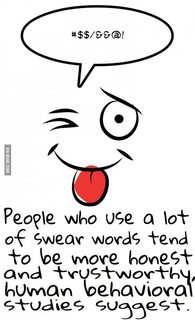 The claim seems pretty simple and straight-forward, but I couldn't find any studies verifying the validity of 9GAG's claim.

Doesn't look like it. The most likely source of the quote is The Science of Swearing by Timothy Jay and Kristin Janschewitz or possibly Dr. Neel Burton's Hell Yes: The 7 Best Reasons for Swearing or possibly the summation by Psych2Go which draws on both of them:

The basic premise that is put forth is that those who cuss are seen as more loyal, trustworthy, and upfront. As such, those who swear may make better friends. Their work suggests that extroverted people and those with Type A personalities swear more (Jay & Janschewitz, 2012), which could be one contributing factor to why those who swear are seen as more trustworthy and loyal. Their research also suggests that the increase in swearing in general, and specifically the use of cussing as a way to speak with friends, may contribute to this image (Burton, 2012).

Unfortunately, after searching for additional research on the subject, no corroborating studies could be found that can validate this claim. Additionally, Jay and Janschewitz have drawn these conclusions about swearing through observation. The major limitation to observation is that, when it is not scientifically validated, it is simply that – an observation.

The Bad Psychology blog has weighed in, saying:

The short answer is: This fact was probably made up.

A 15 minute Google search yielded many hits, but as always (and you'll start seeing this as a pattern with such "facts") none of the websites included legitimate sources. They all claim that studies or psychologists say something…but they never—never—source their claim. And when they do included [sic] "sources," they usually lead to pages where people are just speculating or spreading the same claim without primary sources.

Not the answer you're looking for? Browse other questions tagged psychology language .

469
Was the experiment with five monkeys, a ladder, a banana and a water spray conducted?
9
Are simian lines and personality correlated?
10
Is suicide caused by or correlated with living at high altitude?
18
Is the “Asshole Effect” a phenomenon correlated with wealth?
7
Is obesity correlated with solitary and/or social eating?
5
Can people "wake up" with a new accent? (Foreign Accent Syndrome)
0
Is there a distinction between esteem and confidence and are they independent of each other?
69
Is low emotional intelligence associated with right-wing and prejudiced attitudes?
8
In Sumerian and Akkadian, is the same word used for both ‘priest’ and ‘accountant’?