Does this video of electromagnetic radiation from energy efficient bulbs indicate any danger?

This video on Facebook shows someone using an "electromagnetic radiation detector" to show that the new energy-efficient light bulbs give off alarmingly dangerous amounts of radiation.

I understand that electromagnetic radiation includes not only visible light but also dangerous frequencies such as X-rays and microwaves. What frequencies are being detected here?

I also understand that there may be any number of other reasons to believe that these bulbs are dangerous or ecologically unsound or inefficient. I'm not asking about that. Just about the evidence given by this video.

From watching the video (and pausing it at 15 seconds), I saw that the detector had the label DT-1130 printed on the front of it. 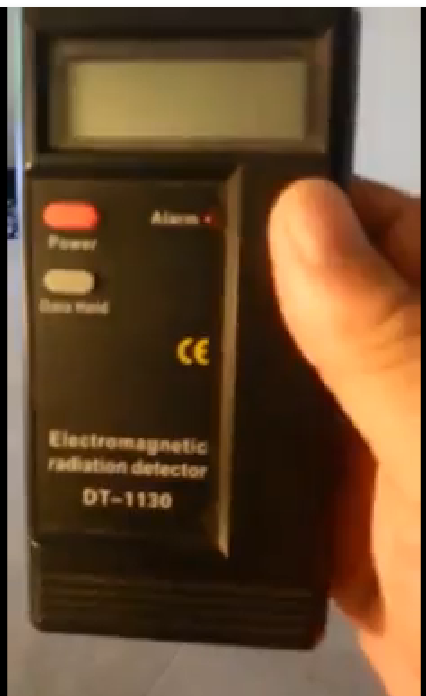 The product description (which I also checked on eBay and Amazon) showed that the advertized frequency range detectable by the device ranges from 50Hz to 2GHz (2,000MHz).

In short, the detector he is using is not capable of detecting gamma radiation, or even Ultra Violet radiation. Heck, it can't even detect visible light.

The detector he is using detects electromagnetic radiation in frequencies ranging from 50Hz to 2GHz (2,000MHz). This ranges from 'Super Low Frequency' to 'Ultra High Frequency.' Don't let the names confuse you, 'Ultra High Frequency' is still a Radio Wave, which is lower frequency than visible light, or even the infrared light they use to keep food warm. If you are old enough to remember it... 'UHF' was a television carrier frequency range.

Visible light ranges from 430 - 720 THz. We don't start getting into the really exciting (read: dangerous) forms of electromagnetic radiation until we get up above the PHz (PetaHertz) range. And the really, really nasty stuff has a frequency measured in ExaHertz.

See...the device he is using is the same thing that ghost hunters use to look for 'EMF emissions.' And you don't see those guys walking around in radiation suits. If he stuck that detector inside of a nuclear reactor...it wouldn't be able to detect the dangerous radiation coming off of it.

In short, there are other examples that show that a CFL bulb simply cannot produce enough Power to generate high frequency EM...but even if they did, this guy could prove nothing with his detector.

It is important to remember that 'Electromagnetic Radiation' is not a bad thing until you get to the very, very high frequencies.

(Information on EMF pulled from standing high-school-level knowledge of Physics, cross-checked with Wikipedia)

To clarify as to why low frequency radiation in the doses created by a lightbulb is non-harmful to the human body:

EM Radiation is commonly divided into 'ionizing' and 'non-ionizing' radiation. This distinction is meant to clarify which forms of EM radiation have sufficient energy to ionize atoms (stripping off electrons) or break chemical bonds. The standard frequency limit at which EM Radiation is considered ionizing is anything higher than 2.39 Petahertz (ref). Ionizing radiation is hazardous, increasingly so the higher energy it has (higher frequency = higher energy). Our detector tops out at being able to detect low-frequency Microwave radiation.

Anything in the 'Radio' band is considered potentially harmful at heavy enough concentrations. See Specific Absorption Rate for details. As I do not possess the equipment to measure the variables I need for the SAR of a CFL bulb, I have to theorize a bit. A detailed reading of the FCC's policies on Radio Safety showed me that in order to get dangerous levels of Radio emission, you either need to be standing close to a very powerful radio broadcast antenna (like a radio station would use) or need to be pressed right up against something that is dedicated to throwing out radio waves for a prolonged period of time. In short, the amount of broadband radiation added by a lightbulb would be completely negligible compared to what is being broadcast by, say, your WiFi router, cell phone, and heating system.

For further reading on the safety of Non-ionizing radiation in doses below what ANSI declares to be the SAR limit, please see the following...

WHO Hub on EMF Research

Long story short, this is utter nonsense. As guildsbounty's answer mentions, this thing claims a range of 50 Hz - 2 GHz. That's just an RF (radio frequency) broadband detector. Using a broadband detector to detect RF (or lower frequency) emissions from electronics is perfectly legitimate, but detecting emissions doesn't mean it's dangerous. The American Cancer Society has a page summarizing the findings on whether microwave RF energy is carcinogenic. They claim no link to have been found by most studies. If you are worried about the health effects of RF energy, though, then you've got much bigger problems than this light bulb, such as your cell phone, radio stations, Wi-Fi, microwave ovens, etc. Also, this detector claims to go down to 50 Hz. This means that it will pick up the e-m field around standard alternating current power lines, which typically operate at 50 Hz or 60 Hz (depending on your location,) including the very wire from which this light bulb is getting its power supply.

Also, the name of the product is absurd. While it can detect microwaves, it cannot detect anything even remotely resembling gamma radiation. Wikipedia lists the starting frequency for gamma rays at 10 exahertz, which is about 1010 times higher frequency than the range supported by this device. Gamma radiation is a product of nuclear decay and is very dangerous. Microwave radiation has nothing whatsoever to do with nuclear decay and is not known to be dangerous, aside from its ability to heat things up (e.g. it's dangerous to, say, stick your head in a microwave oven and turn it on, but that's because of the ~1,000 Watts of power being dissipated into you, which would be dangerous regardless of frequency.) Gamma rays (and X-rays) are a form of ionizing radiation and do cause cancer, according to ACS and WHO. Microwave radiation (and anything below ultraviolet light) are non-ionizing and do not carry the same risks (see ACS/WHO articles above.)

Disclosure: I work for Research Electronics.

Unfortunately, the previous answers take a poorly-worded Newegg product listing as an accurate description of the product, which is a shame. Look closely at the actual product photograph and see that it claims to be an "Electromagnetic radiation detector" which is an accurate description. It appears (from this alternative Amazon listing) to cover a frequency range from 50Hz up to 2GHz, which is of interest to domestic users with devices operating in the radio- and microwave spectrum.

The exposure safety limits of this part of the EMR spectrum are under intense debate because it is the part of the spectrum used by mobile phones, DECT, WiFi, Bluetooth, Zigbee (including 'smart' meters) as well as your domestic microwave oven. Without opening the 'conspiracy' can of worms, there are massive commercial interests which utilize this spectrum.

In Australia, exposure limits are regulated by ARPANSA. The "Radiation Protection Standard for Maximum Exposure Levels to Radiofrequency Fields - 3 kHz to 300 GHz (2002)" and supporting material can be downloaded here. Exposure is limited to less than 10,000mW/m2. Other countries have other limits - a good list is here. Note for interest that Russia and China limits are 100x less than the US.

The radiation from wireless devices is quantified as 'Specific Absorption Rates' in W/kg. The 1998 guidelines from ICNIRP (International Commission on Non-Ionizing Radiation Protection) state:

Exposure to more intense fields, producing SAR values in excess of 4 W/kg, can overwhelm the thermoregulatory capacity of the body and produce harmful levels of tissue heating.

This Standard is based on the guidelines developed by the ICNIRP committee (ICNIRP 1998).

You can look up, for example, the maximum SAR generated for different mobile devices - an iPhone 6 has a measured maximum SAR value of 1.18 (depending on the precise model) see here. Note also that the text instructs: "Carry iPhone at least 5mm away from your body to ensure exposure levels remain at or below the as-tested levels."

Other answers have pointed out that the radiation in this part of the spectrum is non-ionising, but they inaccurately conclude that it is harmless or inert. There are many scientific studies that show biological effects from radio- and/or microwave radiation well below current exposure limits. One of the most comprehensive reviews of the literature was performed by the BioInitiative Working Group, revised in 2012. Access that material here.

There is scientific research to the biological mechanisms for EMF exposure to cause biological effect. For example, this paper reviews 23 studies of the interaction of EMF radiation with the voltage-gated calcium channels (VGCCs). The author of this paper says:

The paper goes on to consider how VGCC activation can produce two well-documented responses to EMF exposure: stimulating of bone growth and the production of single stranded DNA breaks in EMF-exposed cells. In 2011 the World Health Organization classified cell phone radiation as “2b - possibly carcinogenic”.

Some people develop Electromagnetic Hypersensitivity, making them feel physical symptoms when exposed to electromagnetic fields. In Sweden, this can be officially recognised as a 'functional impairment' and treated accordingly. While the direct cause of electromagnetic sensitivity has not yet been established This paper from 2014 suggests myelin damage from EMF exposure may help explain it, saying:

Overall, evidence from in vivo and in vitro and epidemiological studies suggests an association between RF-EMF exposure and either myelin deterioration or a direct impact on neuronal conduction, which may account for many electrohypersensitivity symptoms.

The type of device demonstrated in this video can be very useful for those that wish to understand their environmental exposure to radio- and microwave EMR. These devices are not laboratory-grade but can be used as a useful tool. They can measure both power (mW/m2) or field strength (V/m). The video demonstrates that the high-frequency switching circuits used to drive compact fluorescent globes actually emits EMR at levels significantly higher than background. However, I can't tell what unit of measurement is being used, nor the frequency range being measured.

So, to the substance of the question asked:

So, my personal take: I would think twice about putting that globe in my underpants all day long. However, I have held my own EMF detector (A Cornet ED65 'Electrosmog meter', range 100Mhz-8Ghz) next to spiral CFL and round CFL in my home and not detected any increase in reading. In my opinion there are many other domestic EMF sources that would be more concerning. I would be more concerned about the light spectral quality, flicker and mercury content of these lights.

Edit notes: thanks for the feedback on my response. I hope I have provided more adequate citation for the statements made in this answer.

Not the answer you're looking for? Browse other questions tagged radiation .

16
Is there any real benefit in the everyday use of surgical masks to protect oneself from radiation?
13
Can products that claim to to reduce electromagnetic radiation from mobile phones be substantiated?
15
Does this video show Fukushima Daiichi radiation in San Francisco?
8
Does Zeolite remove heavy metals and radiation from the body?
2
Does low-dose radiation from X-rays or CT scans cause cancer?
31
Does radiation from sleeping next to your smartphone affect your brain patterns negatively?