Regardless of whether The Illuminati (plural of Latin illuminatus, "enlightened") is/was real or fictitious, many people online seems to be claiming that in one episode of Ducktales this scene appears: 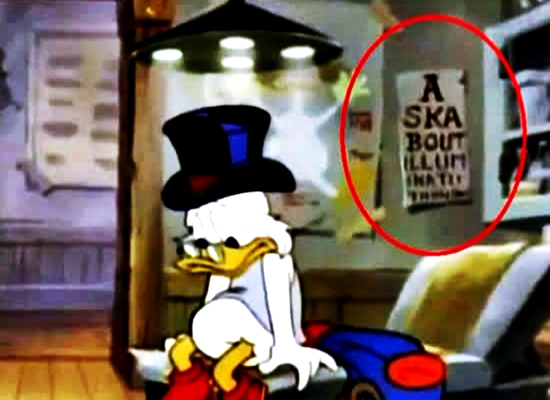 In the corner of the image, one can read "Ask about illuminati".

For example this site has an article called Disney’s Ducktales Exposed: “Ask About Illuminati” where they make the claim:

I’m not trying to prove the existence of the Illuminati with this article. I just wanted to point out a few interesting observations. This episode of Disney’s “Ducktales” was aired in the 1980’s.

And they point out the image, they also link to a YouTube video showing the Ducktales scene, which seems to be the current source.

The publisher of the video (which received 300K views since 3 years), is receiving full advertisements from YouTube, and seems to be linking to for-profit-website, it does raise suspicions of whether this really happened in the show.

Other articles claiming the same thing: here and here

I'm really skeptical and I do not really trust that unofficial video on YouTube show; we all know there are numerous bored professional video editors who love to make false claims or otherwise.

I would like to know if this was really introduced by the producer, Disney. Maybe finding an official source of the cartoon will help us be sure whether Disney actually added this or not.

IMPORTANT: I do not care if it was put in harmless, trivial, humourous way or not. I just want to know if this is real or not.

There are many versions of Episode "Yuppy Ducks" on youtube alone, along with some on other video-sharing websites, all of which show the exact same in-place (presumed) joke/easter egg.

Unless all those bored video editors have gone to a lot of trouble, I think we can safely say that the answer to your primary question:

I just want to know if this is real or not.

Is almost certainly YES, this existed in the original airing of this particular episode of Duck Tales.

Not the answer you're looking for? Browse other questions tagged illuminati .

4
Rihanna is the “Princess of the Illuminati”?