On February 12 this year the organizers of the Subversive Festival 2013 in Zagreb, Croatia, uploaded a video to YouTube showing a speech of Yanis Varoufakis, who is now the Greek minister of finance. In the video he seems to show his middle finger: 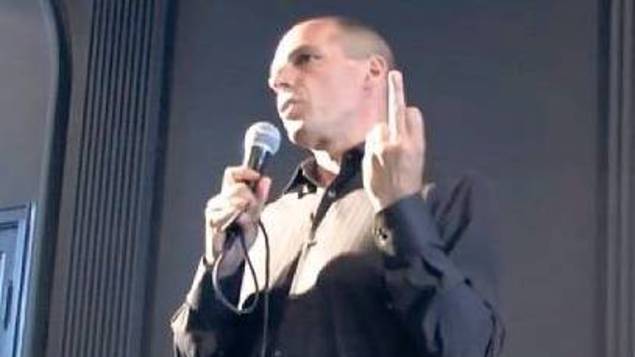 On Sunday Varoufakis claimed in a German TV show that the video was doctored, causing a huge uproar in the German media. The video was analyzed by journalists all claiming the video is real.

Yesterday evening another German TV show uploaded a video claiming they indeed faked the finger (English subtitles available), including a quite convincing making-of: 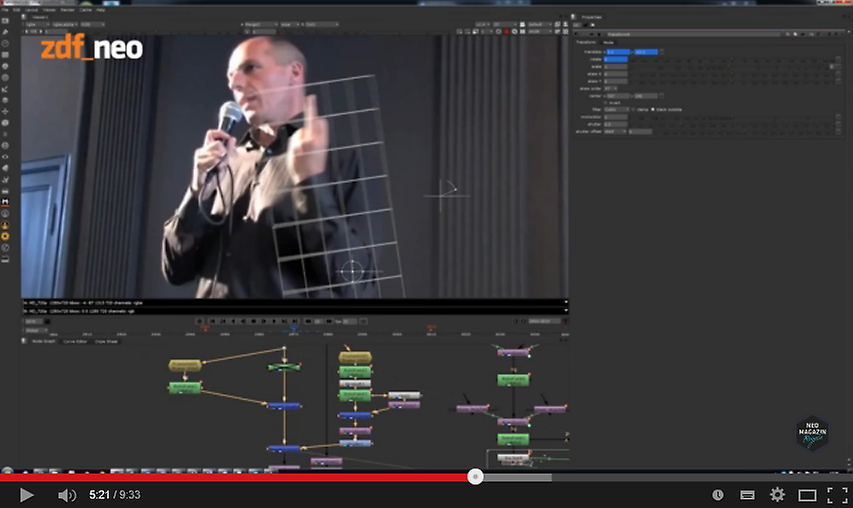 Now which is the real version?

No, the video is real, but it was taken out of context.

The second German TV-Show is a well known satire show, and they freely admit from 8.06 to 8.30 in their video (German with English subtitles), presumably for legal reasons, that their doctoring is a joke. He follows up criticizing Günther Jauch, the host of the first TV show, for taking Varoufakis' gesture out of context in order to stir anger for populist reasons. Here are is the subtitle transcript from the time range above:

Dear editorial staff of Günther Jauch, Yanis Varoufakis is wrong, you did not falsify the footage. You simply took it out of context and gave him the runaround, so that the average german could pursue their passion for being angered. "Foreigner. Out of Europe you go! He's poor and takes our money! That's just not possible! We are the bosses in here!" That's what you did. The rest is our effort.

Further, Varoufakis posted a link to a version of the entire clip he considers authentic. The clip contains some very intelligent analysis of the situation, and provides ample context. However, the finger is clearly visible.

While the finger is clearly a colorful element of style, context suggests he is using it to protest how the German government's plan benefits greek and german banks at the expense of greek and german taxpayers, a claim which is undisputed. Der Spiegel writes, in a slightly edited Google translation of the article summary:

Varoufakis' thesis is that the Troika aid was not an act of solidarity of European citizens and taxpayers with the Greek people, but an act of self-help of the European financial sector at the expense of EU citizens. This thesis can not simply be dismissed out of hand. Reason enough to call the self-righteousness German Wutbürger (anger-driven citizens) into question.

Why Varoufakis attempted to counter Jauch's attack with the doctoring claim, rather than pointing out that he was taken out of context, is unclear. The simplest explanation, in the opinion of the answerer, is that he is inexperienced at dealing with attacks on his character, has no access to expensive political advisors to train him, was taken by surprise, and is now forced to roll with it.

It looks like the host of the satire show is actively helping to seed doubt about the video's authenticity in order to support Varoufakis by using ambigious language and tonality while technically stating the truth. Here is a translation of a recently uploaded statement:

Our video is 100% real. Whoever claims the opposite is a liar. As an apology and gesture of goodwill towards our European friends, Günther Jauch and the Bild newspaper's editorial staff should immediately to leave the Euro zone of their own accord. The accusation that our video were a manipulated fake-fake fake-fake-fake has no merit whatsoever. We would never friviously expose a necessary journalistic debate about a two year old middle finger that was taken out of context to ridicule.

Note that the video detailing fakery is indeed a 100% real piece of satire, just as claimed.

Not the answer you're looking for? Browse other questions tagged video greece .

16
Is this video showing an Apple engineer discussing the new MacBook (2015) authentic?
14
Biden 'fake' interview: video of Biden's hands appearing the wrong side of microphones