Were three journalists (Bob Simon, Ned Colt and David Carr) investigating a plausible relation between the CIA and 9/11?

Apparently these three journalists all died within a couple days of each other (Feb. 11 to 12, 2015). The implication of some rumours going around is that these folks were killed because they have evidence showing that the CIA had some involvement in 9/11.

There are several web-sites discussing this, with excerpts such as:

The work of the four journalists sought to discover the truth of the attack on the twin towers. David Carr was who devised to make the film after seeing the audiovisual documentary Citizenfour and study each confession exanalista CIA Edward Snowden.

Were these three collaborating on an investigation into the CIA in relation to 9/11? If so, is there any reason to believe they had any persuasive evidence? 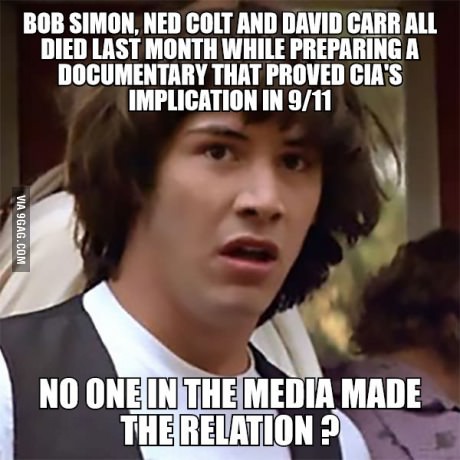 51
Did the CIA sell drugs in the US?
21
Is there any other skyscraper that was destroyed totally just by fire except the three World Trade Center towers?
7
Was the term “conspiracy theorist” made popular by the CIA?
8
Were the Cologne attacks under-reported by the German media?
12
Did the US Government try to use EMF rays to remotely affect the mental functions of their targets between 1978-1986?
43
Does the owner of the Washington Post have a deal with the CIA worth 600 million dollars?
12
Did the CIA hire mobsters to stage riots in Iran during 1953 coup d'etat?
7
Did the CIA conclude that Uri Geller had psychic powers?
53
Did the CIA blow up a Siberian pipeline in 1982?