Is fluoride an ingredient in Prozac and rat poison?

The Raw Food Family, with almost half a million likes, made this post on June 15, 2014. 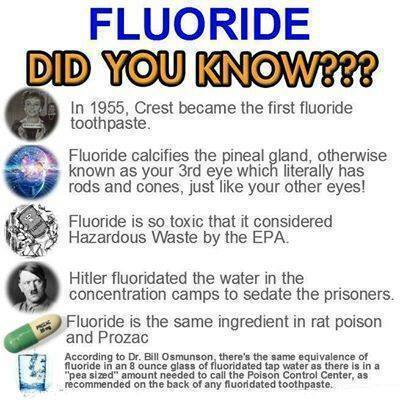 Is there fluoride in rat poison and Prozac?

"Fluoride" is fluoride-containing compounds, such as sodium fluoride or sodium monofluorophosphate.

The first "rat poison" I thought of was warfarin which doesn't contain fluorine atoms, but looking through a list of other rat poisons there's at least one i.e. fluoroacetamide which does.

Although it's true I think it is a slightly silly statement (perhaps analogous to saying that meat and broccoli contain carbon atoms which are an ingredient of the Ebola virus).

Fluorine is chemically similar to chlorine (i.e. they are both halogens). Chlorine too could be used to make dangerous substances, e.g. poison gas, but it's also a main ingredient of common table salt aka sea salt aka sodium chloride.

One of the comments to/below this answer said that it's important to:

The adage that the dose makes the poison has been known for at least 500 years. People can even die from having too much water, but that fact must not be used as an argument to stop ingesting water.

That adage about 'the dose' happens to be true of an actual "rat poison" too, where for example warfarin (introduced in 1948 as a pesticide against rats and mice) is prescribed medicinally to humans (in carefully administered doses) as an anticoagulant e.g. to treat thrombosis.

That's not to say though "that fluoride is a rat poison" is true. Fluorine is an atom, one the elements, which can be used to make diverse chemical compounds (most of which are not rat poison). It's probably better to view fluoride as a type of salt or mineral. It is true that excessive fluoride is bad for you. This kind of 'excessive' fluoride can occur naturally in some water, or occur as a result of industrial contamination: but the amount of fluoride that's recommended when it's added to drinking water is not 'excessive'.

Fluoride is a component of the human body:

Fluoride anions are found in ivory, bones, teeth, blood, eggs, urine, and hair of organisms. Fluoride anions in very small amounts are essential for humans. There are 0.5 milligrams per liter of fluorine in human blood. Human bones contain 0.2 to 1.2% fluorine. Human tissue contains approximately 50 parts per billion of fluorine. A typical 70-kilogram human contains 3 to 6 grams of fluorine.

Note the quantity that is usually in the human body: i.e. 3 to 6 grams.

The amount of fluorine in fluoridated drinking water is relatively small:

The World Health Organization recommends a guideline maximum fluoride value of 1.5 mg/L as a level at which fluorosis should be minimal.

One more comment -- even though original research and theoretical answers are not allowed I hope these (trivial) calculations may be allowed.

The Parts-per notation means by weight:

Therefore, it is common to equate 1 gram of water with 1 mL of water. Consequently, ppm corresponds to 1 mg/L

Therefore toothpaste has approximately 1000 times the concentration as the maximum recommended concentration in water (which was quoted as "1.5 mg/L" above).

A "pea-sized" spot of toothpaste might be about 1 cubic centimetre i.e. 1 gram. An "eight-ounce" glass is water is about 200 grams. So the following statement seems to be to be true, within about a factor of 5:

(My calculation, which depends on the definition of "pea-sized", was that the toothpaste has about as much fluoride as 5 glasses of water).

What I don't think is true is that these are a poisonous quantity. My fluoridated toothpaste (I'm in France) doesn't mention poison at all. If there's any poison warning label on toothpaste in North America, perhaps that's in case some child sucks down a whole tube of toothpaste as if it's candy.

In 2011, the American Association of Poison Control Centers reported 20,977 exposures involving toothpaste with fluoride, 18,564 of them in children under the age of 6 years.[3] Only 376 cases were actually treated in the emergency department. Moderate effects were seen in 45 cases, and major effects were seen in one case. No deaths were reported.

Death may result from ingesting as little as 2 g of fluoride in an adult and 16 mg/kg in children. Symptoms may appear with 3-5 mg/kg of fluoride. Estimated toxic dose for fluoride ingestion is 5-10 mg/kg. The estimated lethal dose is 5-10 g (32-64 mg/kg) in adults and 500 mg in small children. One death from ingestion of fluoride toothpaste was reported to the American Association of Poison Control Centers in 2002. No deaths were reported in 2011.

Assuming that any 2-year-old child weighs more than 10 kg, then "Symptoms may appear" with 30 mg fluoride.

So (you can double-check my calculation to verify that I haven't dropped a decimal place) a whole tube of toothpaste contains 150 mg which is enough to cause symptoms in a 2-year-old child. "The estimated lethal dose is 500 mg in small children" implies that 4 whole tubes of toothpaste should be lethal in small children. "5-10 g (32-64 mg/kg)" means that the lethal dose for an adult is about 10 times higher than that.

Getting back to the topic (i.e. Prozac), a common dosage for Prozac 20 mg/day. Estimating that a pea-sized spot of toothpaste contains 1.5 mg of fluoride, I think that means that even if fluoride were actually Prozac it isn't concentrated enough in toothpaste, even if you swallow it, for it to have any effect.

The "poisonous" aspect has already been addressed, but what about that "pineal gland" claim?

The pineal gland is located in the brain of vertebrates, and regulates sleep patterns through the production of melatonin. As this is related to both daily and seasonal light changes, the gland does act on visual information, but that information comes from the retina, not from itself. The concept of a "third eye" is addressed related to this question.

The pineal gland accumulates both calcium and fluoride, and this accumulation is correlated with age. This process is thought to be related to the hormone changes during sexual development.

28
Did the Nazis maliciously fluoridate drinking water?
9
Does this audio track create a bond between the brain and the central nervous system whilst stimulating the pineal gland?
14
Is fluoride toothpaste dangerous?

14
Is fluoride toothpaste dangerous?
24
Is fluoride in water an industry waste product?
15
Was fluoride grandfathered in by the FDA because it was sold as rat poison prior to 1938?
2
Was Phyllis Mullenix fired after publishing research on neurotoxicity of fluoride?
19
Will fluoride and chlorine dissipate from tap water left to sit overnight?
13
Does fluoride cause the body to absorb extra aluminum?
13
Does using a fluoride-based toothpaste or fluoride-supplemented tap water lead to higher fluoride concentration in the pineal gland?
13
Does fluoride supplementation lead to girls reaching puberty at a lower age?
37
Has fluoride been classified as a neurotoxin?