Is Tetris by Electronic Arts the best selling video game on mobile?

According to Wikipedia, Tetris by Electronic Arts is the best selling video game ever made.

With 100 million downloads, it sold 17.46 million copies more than the next best selling game, Wii Sports on the Nintendo Wii, which sold 82.54 million copies.

There is also a news article that raises the sale count to 425 million copies, which would mean that Tetris sold five times more copies than the next best selling video game.

The Android store only shows 10 million downloads, and my question is simply whether the claim of 100 million sales is plausible because Android is the most popular mobile platform, and so would logically account for the majority of the sales.

There are clearly other factors to consider, such as sales of Tetris variants with different "power ups", as well as all the other mobile platforms that it was released on. However, if the claim is real, then these extra versions must make up the missing 90% of the 100 million sales. 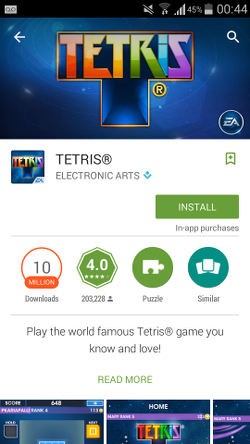 According to a different Wikipedia page, the one for this very game, the initial release was September 12, 2006 for the iOS, with an Android release only coming out in September 1, 2011, almost a full five years later.

Which such a large difference in release dates, iOS would make up the majority of downloads for this app, not Android.

This couples with the fact that there were two separate events where the app was removed from the App Store and Google Play, though they were fairly close together and shortly after the Android release, so they aren't as likely to have had as much of an impact as the release dates.

5
Does the weather affect the selling of your house?
15
Did GamePro make up the story of the arcade game Polybius?
8
Are mobile phones causing the demise of bees?
4
Do 48% of women in the Arab world not own a mobile phone?