Is Singapore the most expensive city in the world?

According to this article, Singapore is now the most expensive city in the world

Can that be true?

I haven't been to Singapore for about 10 years but last time I was there, whilst it wasn't third world prices but it wasn't super expensive either.

Also, I have recently been to Paris and Hong Kong which are both in the top 10 and I would actually consider them quite cheap. Definitely been to many other cities that are more expensive.

In addition, I live in Sydney and petrol is definitely not $1.83/ltr and a $30 bottle of wine would be some fairly fancy stuff - you could easily get a decent bottle for under $15.

According to the article, the claim comes from the Economist (although the actual research is behind a paywall). Granted all I've got is really experience as a tourist, is there any truth to this article at all?

tl;dr No, this is only true when restricted to expatriates

I think it is important to look at what exactly the report looks at. In the summary to the report, they state:

The Worldwide Cost of Living survey enables human resources line managers and expatriate executives to compare the cost of living in 140 cities in 93 countries and calculate fair compensation policies for relocating employees.

The survey gathers detailed information on the cost of more than 160 items-from food, toiletries and clothing to domestic help, transport and utility bills--in every city.

While cost of living is a difficult thing to define and measure, there are other efforts to compare it:

Also note that most comparisons neglect taxes, which are lower in Singapore (maximum 20%) than for instance in Norway (up to almost 50%).

Overall, it is safe to conclude that Singapore is indeed an expensive place to live but by most standards not the most expensive one.

Is singapore the most expensive city in the world?

In 2015, they have listed the top-ten locations surveyed: 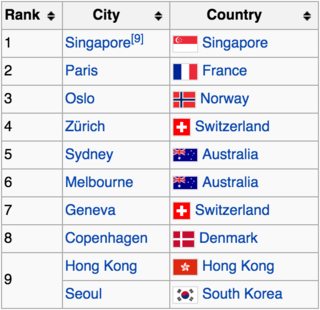 Bloomberg, BBC, news.com.au, and other news agencies got their news from a report.

The report (basically you can consider evidence) can be found HERE which can be bought for 995$ (over-expensive). The report contains:

Update: I was able to download a free sample report from their website. You can see it here. You may read it and in case you're skeptical about any unreferenced claim there, you can ask about it.

Additional note: It is reported that in Singapore, the study found, a loaf of bread, a bottle of wine, and a pack of cigarettes will together cost the equivalent of $39.11. Can you relate to that, since you were in Singapore? This would cost in my country Lebanon, 5$ or 6$ only.

Not the answer you're looking for? Browse other questions tagged economics singapore .

12
Is Coffee the most traded commodity in the world after Oil?
21
Does the Bilderberg Group have influence on world events?
13
Is avoiding global warming by preventing CO₂ emissions far too expensive compared to geoengineering or adapting to a warmer world?
15
Is climate change currently good for the world economy?
4
Is Moscow metro the only profitable metro in the world?
10
Does skip-lagging/hidden city travel make flights more expensive?