Of course, my answer was that life developed and adapted to earth's conditions and not the other way around. I was curious, however, if their claim about earth's position is correct.

Example sources of claim: Yahoo Answers question, Facebook linked by Fundies Say the Darndest Things, Facebook post by Aperture Science, Blog debunking the claim, Someone citing their priest, and others.

Their claim is incorrect. On an astronomical scale, one kilometer is a very small value. In fact, Earth's orbit regularly varies by far more than 1km.

According to the NASA's Solar System Exploration website's facts and figures,

That is, Earth's distance from the Sun varies by 5 million kilometers during a single year. A change of one kilometer would not be noticeable.

The Goldilocks zone ("Circumstellar habitable zone") is a real thing:

In astronomy and astrobiology, the circumstellar habitable zone (CHZ), or simply the habitable zone, colloquially known as the Goldilocks zone, is the region around a star within which planetary-mass objects with sufficient atmospheric pressure can support liquid water at their surfaces. The bounds of the CHZ are calculated using the known requirements of Earth's biosphere, its position in the Solar System and the amount of radiant energy it receives from the Sun.

But it's rather more than one kilometre wide:

Estimates for the habitable zone within the Solar System range from 0.725 to 3.0 astronomical units, though arriving at these estimates has been challenging for a variety of reasons. Numerous planetary mass objects orbit within, or close to, this range and as such receive sufficient sunlight to raise temperatures above the freezing point of water. However their atmospheric conditions vary substantially. The aphelion of Venus, for example, touches the inner edge of the zone and while atmospheric pressure at the surface is sufficient for liquid water, a strong greenhouse effect raises surface temperatures to 462 °C (864 °F) at which water can only exist as vapour. The entire orbits of the Moon, Mars, and numerous asteroids also lie within various estimates of the habitable zone.

Converted into kilometers, that's "Estimates for the habitable zone within the Solar System range from about a hundred million to about half a billion kilometres". 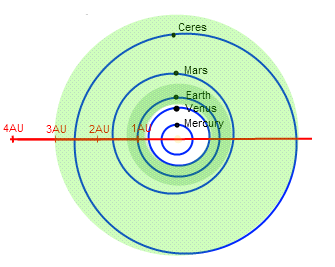 And so it's not at all unusual to find planets within that zone:

On November 4, 2013, astronomers reported, based on Kepler space mission data, that there could be as many as 40 billion Earth-sized planets orbiting in the habitable zones of sun-like stars and red dwarf stars within the Milky Way Galaxy. 11 billion of these estimated planets may be orbiting sun-like stars.

So the implied claim that the existence of an Earth-like planet within the habitable zone is unlikely to have occurred anywhere in the universe purely by chance (and therefore is proof of purposeful creation), seems pretty clearly false to me, because there look to be approximately 40 billion counter-examples.

One out of every five sunlike stars in the galaxy has a planet the size of Earth circling it in the Goldilocks zone — not too hot, not too cold — where surface temperatures should be compatible with liquid water, according to a herculean three-year calculation based on data from the Kepler spacecraft by Erik Petigura, a graduate student at the University of California, Berkeley.

We find that 22% of Sun-like stars harbor Earth-size planets orbiting in their habitable zones.

1 in 5 stars like the one at the center of the solar system hosts a planet capable of holding liquid water on its surface and — if it had the right chemical ingredients — supporting life.

One should also remember that our type of life is not the only possible type of life. Perhaps there are other forms of life for which an Earth-like planet would be outside their habitable zone.

in the cosmological context there’s no obvious reason why life has to be exclusively dependent on a water-based environment. Life could be so opportunistic and adaptable it may simply work with whatever liquid is at hand. Alternative solvents considered by astrobiologists include dihydrogen (a simple molecule composed of two hydrogen atoms), sulfuric acid, dinitrogen, formamide, and methane, among others.

If so, this antiquates the notion of a narrow habitable zone encircling billions of stars in our galaxy. Depending on your flavor of life, there could be multiple habitable zones around the sun and other stars.

It's even possible that life - our own kind of water-based life - may exist within our own solar system but outside of the 'Goldilocks zone', perhaps getting its energy from sources other than the sun. Jupiter's moon Europa is often considered as a candidate for for life:

Many scientists believe Europa is the best location in our solar system to find existing life. It has a subsurface ocean in contact with rock, an icy surface that mixes with the ocean below, salts on the surface that create an energy gradient, and a source of heat (the flexing that occurs as it gets stretched and squeezed by Jupiter's gravity).

In other words: Europa could have fish.

If they're intelligent fish, perhaps they chat amongst themselves about how they came to live in a place where the conditions for life exist, and whether such a thing could happen by chance or must be a matter of design.

Not the answer you're looking for? Browse other questions tagged evolution astronomy earth .

24
Was the Earth originally smaller and ocean-free?
13
What was the density of prehistoric Earth atmosphere (dinosaurs buoyancy theory)
11
Do ancient Hindu texts predict the future expansion of the Sun?
31
Was the Earth one big ocean once?
12
Did the Mayans believe the Earth was flat?
41
Do 26% of Americans believe the sun revolves around the Earth?
10
Did the Indian Mathematician Aryabhata state that the earth was round and calculate diameter of earth