Has every U.S. presidential election been won by the campaign with the most money?

According to Russell Brand: 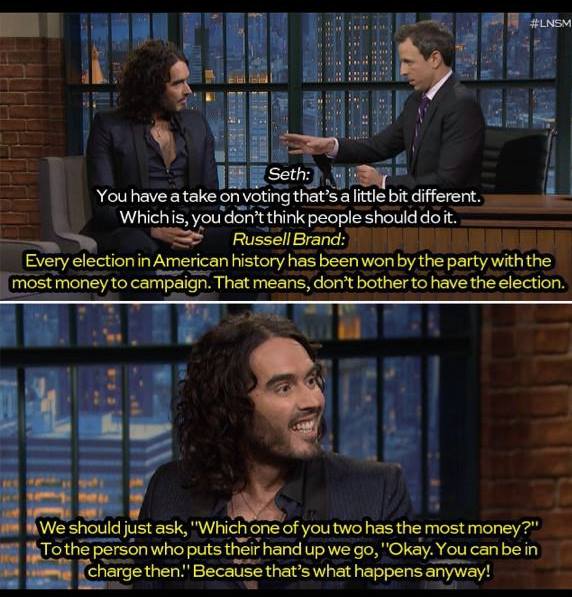 According to "Presidential Elections: Strategies and Structures of American Politics" at page 65:

The book references the statement to: Herbert E. Alexander and Harold B. Meyers, “The Switch in Campaign Giving,” Fortune, November 1965, 103–8.

Another source has the following list and says it is from New York magazine but independently verified (winners are in bold, the second candidate spent more):

From another point of view, Ross Perot certainly could have outspent Clinton and Dole if he wanted to.

Update 2016: according to What Trump and Hillary Spent vs Every General Election Candidate Since 1960 the following is spending by each candidate in real dollars from 1960-2016: 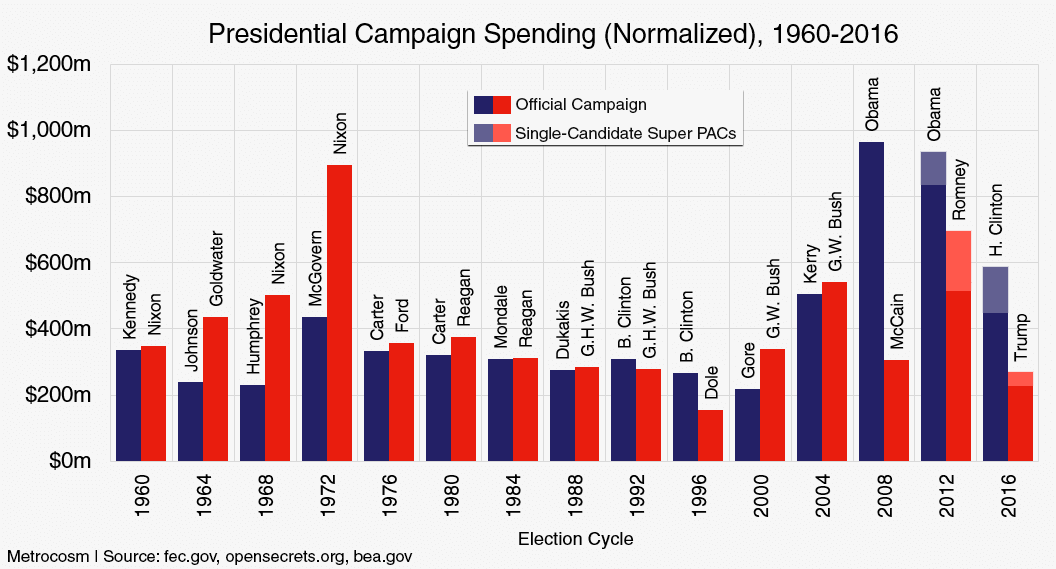 There are two ways to interpret this. One is that when we're talking about the "richer" candidate, what we really mean is the campaign that spends more. There is already an answer showing that isn't true, as there have been three exceptions from 1960 to now: 1960, 1964, and 2016. This is rather clearly the claim from the question:

It does not include Barry Goldwater, who was never president, but another source puts Goldwater at less than $1 million.

Hillary Clinton is not included, but presumably she had the same net worth as Bill.

Kennedy is not listed on Wikipedia so went back to the source.

Even assuming that this fixes those three exceptions, it opens up a whole new set.

Now, let's compare to three of their challengers.

Mitt Romney had between $190 and $250 million (source), which is greater than Obama's peak of $40 million. Obama's peak came after Obama left office. In 2012, I believe he had $10-20 million, mostly from book royalties. Example source.

So of the last four presidential elections, three were won by the poorer candidate.

Under this interpretation, the claim actually does worse. Of course, that may be because the current situation is different. But looking back further finds that Herbert Hoover was richer than Franklin D. Roosevelt (both are in the Wikipedia list). And Teddy Roosevelt was richer than Woodrow Wilson. In 1992, Bill Clinton was much poorer than George H. W. Bush (although he would later become richer).

2
The candidate with the bigger campain budget is allways elected

49
Is there a "red shift" in U.S. elections — a significant shift to republican votes between polls and voting? Does this imply fraud?
13
Is Obama the only president who has been denied by the opposing party when trying to raise the minimum wage?
15
Is Trump's election the first successful presidential election campaign with a female campaign manager?
36
Did 17 U.S. intelligence agencies claim that Russia was behind the DNC hack?
38
Did the DNC claim in court that it has no obligation to have a fair and impartial primary?
30
Are there "1,071 Proven Cases of Voter Fraud"?