Is there a correlation between penis size and race?

I recently saw this video, where among other things they claimed that there is no correlation between penis size and race. Is this true?

I don't remember everything about the video. It was animated, gave a lot of statistics about sex, and was titled something like "All you wanted to know about sex".

EDIT:To be clear, I shall use this definition from Wikipedia:

Race is classification of humans into large and distinct populations or groups often based on factors such as appearance based on heritable phenotypical characteristics or geographic ancestry.

There doesn't seem to be enough information to fully prove or disprove the correlation, but whatever studies ARE avaiable, for most part, support the theory that there are no statistically significant differences. Some example studies listed below:

Here's a quote from one study:

There are several areas where further work is needed. For instance, except for the Korean study, there is little evidence of racial differences. This runs counter to many widely held suppositions and needs further investigation.

The study quoted is a review, conducted by Drs. Kevan Wylie and Ian Eardley of the Porterback Clinic and Royal Hallamshire Hospital in Sheffield and St. James’ Hospital in Leeds, United Kingdom, respectively, combines results from more than 50 international research projects into penis size and small penis syndrome (SPS) conducted since 1942.

Drawing upon the results of 12 relevant studies, the review, detailed in the British Journal of Urology (BJU) International, finds that the average erect penis is about 5.5 to 6.2 inches long and about 4.7 to 5.1 inches in circumference.

I think that the article might be available online, though it's a Google Docs URL so I'm unsure of whether it will work permanently. It's worth looking at since it contains (in Table 1) the raw data on which above-quoted conclusion was made.

In addition, Google Answers has several links to other studies/statistics.

One thing it did state up front (I think quoting from Wiki):

The only reliable penis-size studies commonly quoted in the literature are the Kinsey study, the UCSF study, and an Italian study, none of which even attempted to correlate size with race.

Specifically, Kinsey data - which one would have naturally started with - is noted to be problematic due to extremely small sample size for African Americans (sample in double digits).

Design: A prospective and comparative study

Subjects and Method: Full-stretch flaccid penile lengths, and flaccid penile lengths, were measured in 115 adult men of the Black race in Nigeria. The results were compared with reported similar main studies on people of other races, which were accessible to the authors. These studies were done in Italy, Greece, Korea, Britain, and the United States of America.

Result: The mean full-stretch penile length of the Nigerian Blacks was 13.37cm and the mean flaccid length was 9.36cm. Similar studies reported full-stretch penile lengths of 12.50cm in Italians, 12.18cm in Greeks, 9.6cm in Koreans, 13cm in British Caucasians, and 12.45cm in the American Caucasians. The penile length for Nigerian Blacks was longer than those of the other races, but the differences were only statistically different in comparison with the Koreans.

Conclusion: There is the possibility of racial differences in penile sizes, but there is no convincing scientific background to support the ascription of bigger penile dimensions to people of the Black race

This study suggests that there is a tendency for Indian men to have shorter penises than the 'International Standard'.

Over 1,200 volunteers from the length and breadth of the country had their penises measured precisely, down to the last millimetre.

The scientists even checked their sample was representative of India as a whole in terms of class, religion and urban and rural dwellers.

The conclusion of all this scientific endeavour is that about 60% of Indian men have penises which are between three and five centimetres shorter than international standards used in condom manufacture.

Here's a larger report, collated from this data, which included whether it is measured or reported: 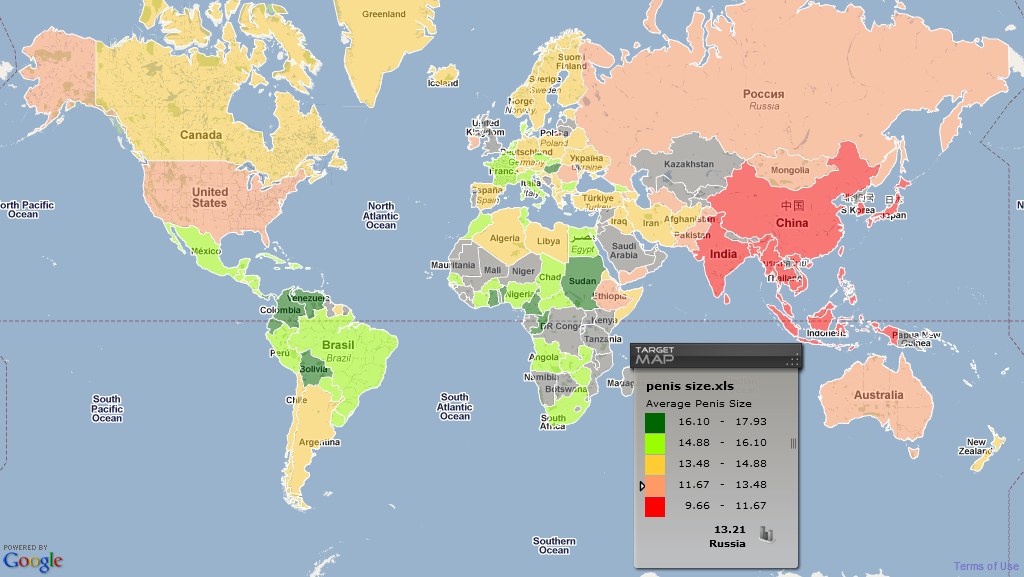 Well, there are significant differences in testes size by race; penis length is more up in the air.

One can find the following information I reproduce in the book Sexual Selection and the Origin of Human Mating Systems, the most current title on the subject, from a leading researcher in the field of primate sexual selection, a certain Alan Dixson. The title of the book hints at the evolutionary reason why such differences should be expected and are found: Wherever the mating systems of two closely related species, populations, races, whatever, differ, there will be differences in the size of the male sexual appartus due to male intrasexual selection. Natural selection operates more strongly in the species, population, race, etc. whose males percentage-wise pass fewer of their genes into the next generation.

For example, chimpanzees, our closest cousins, have 3 times the size of testes humans do, adjusted for body weight; in contrast to our relatively fidelitous long-term pair bonding, chimpanzees males vie in multi-male multi-female coalitions to rise to the alpha position, where they hope to monopolize some huge percentage of female matings by virtue of their position. Thus, more is stake for individual chimpanzee males than for we lucky humans; to succeed evolutionarily, each one must make the best of each opportunity it is afforded, and thus natural selection has introduced innovations like large testes, elaborate penis morphologies, and indeed strange things like post-copulatory plugs to further those ends. Micro-differences between human populations arise from the same architecture: For example, because polygyny is more common as one goes towards the equator, meaning fewer males in those areas being able to pass on their genes, one might expect to find the signs of intensified intrasexual competition, such as larger testes, longer penises, and larger canines, and one does in fact find those things.

Anyway, to the data. Dixson begins with testes size, and so shall we:

OK, so what exactly are these differences? Dixson informs us:

Turning to measurements of combined testes size, there is a strong trend towards the occurence of small testes in men from Asia (China, Japan, Korea, and perhaps in India) as compared to measurements from European and African populations, or their ethnic derivatives. (e.g., in the USA and Australia.) These differences are quite striking [...] smallest by far are the testes of 209 Hong Kong Chinese, weighed in two separate studies.

In the interleaving paragraphs, he goes on dryly about various summary statistics of the comparison, which I'll leave for the reader to divine for themselves in the appending charts. Continuing, Dixon writes:

An interesting comparison is provided by Ajmani, Jain, and Saxena's (1985) measurements of Nigerian men. [...] Even if we allow for an overestimate of testicular volume in this study (due to a failure to control for scrotal thickness, see Table 2.2.) Nigerian men have testes more than twice as large as those of Hong Kong Chinese subjects of similar height [...] Next smallest are the testes of Japanese men (averaging 30 ml and 35 ml in studies by Nakamura (1961) and Fujii et. al (1982)). The same is true for studies of Korean men....by comparison, the weights or volumes of testes in men in UK, France, Scandinavia, and other parts of Europe, as well in the USA, Australia, and Nigeria are larger on average than for those men in Asian populations in which data exist...largest of all are the testes of 209 Nigerian medical students (50.1 ml, Amjani et al. 1985) and three black African Americans measured orginally by Schultz (50.2g).

Intriguing. Dixson goes on at length, with human-primate intercomparisons, which is actually the real thrust of the book. Later, though, it's on to ethnic differences in penile length:

On average, the human penis is 15-16 cm long, and 10-12 cm in circumference, during tumescence. There is considerable individual variability in penile size, however. [...] There may be ethnic differences in penile dimensions, but these remain uncertain, due to lack of reliable comparative data. Potts and Short refer to a survey (conducted by Japanese prostitutes) reporting a slightly shorter average length of erection in Japanese males (13.75 cm) as compared to westerners. Rushton and Bogaert (1987) cite Nobile (1982) who used the Kinsey data to examine possible differences in size between American Blacks and Caucasians...[they] emphasize that the length of the flaccid and erect penis is significantly larger in black males than in Caucasians. However, none of the differences they cite exceed 0.5 in., and thus one wonders whether the methods used by Kinsey et. al might have produced differences to subjective bias [...]

The only other study I was able to locate...recorded that Nigerian medical students had penes averaging 8.16cm in length and 8.83 cm when flaccid...Kinsey['s] measurements for American Caucasians [are] as follows: length 9.65 cm, and circumference, 7.9 cm. As matters stand, therefore, it would not be justifiable to conclude that robust ethnic differences in penile size have been demonstrated in human populations.

In other words, the study conducted directly in Africa found shorter average penis lengths than Kinsey found, though Kinsey found the stereotyped hierarchy within his own data. However, there's an obvious paucity of data due to the sensitivity of the subject, so there is not enough to conclude that there's a significant difference.

Now, all that's left are the various charts to peruse for amusement. Do note that in the final chart, inter-race differences between humans are larger than between species orangutan-gorilla differences, belying all sorts of common mythology about race: 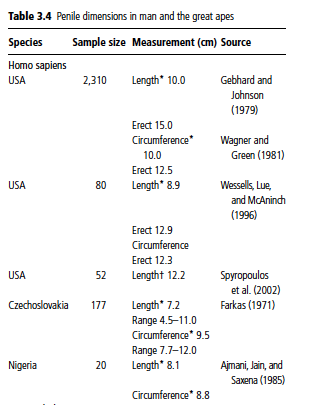 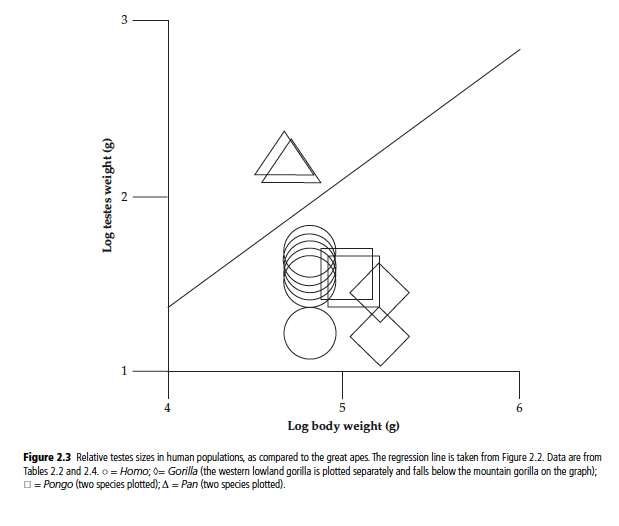 Not the answer you're looking for? Browse other questions tagged race physiology .

24
Is there a relation between brain physiology and gender identity?
10
Does foot size correlate to penis size?
14
Is the size of a penis when erect proportional to its size when flaccid?
6
Can the size and shape of penis be enhanced permanently?
14
Are these rape statistics correct regarding rapes of black women by white men between 2003 and 2008 in USA?