Have there been documented cases of "blood pumping from the trunks of trees"?

Once the stuff of myth and legend, modern day eye-witnesses now catch on camera blood pumping from the trunks of trees.

This is linked to biblical accounts (Book of Ezra).

Have any of these instances been validated? Examined by reputable botanists and established as not likely to be hoaxes? I wouldn't expect tabloid speculation from the BBC, but have not found any corroborating sources.

Rjzi helpfully points out that dragon trees are known for red sap. However, but the video is not exclusively about dragon trees (indeed, they're not mentioned). Yews are specifically mentioned, and unnamed trees in Australia with rough bark that does not seem to match the dragon tree. My question is, are there reputable accounts of trees not known for having red sap nevertheless appearing to bleed. E.g., perhaps there's a fungus known to gives tree sap a red color?

The Dracaena cinnabari (Socotra dragon tree or dragon blood tree) is well known for having a distinct red sap or resin and there are a number of other plants that also exhibit similar "Dragons's Blood". As noted in the Wikipedia article on Dragon's Blood:

The dragon's blood known to the ancient Romans was mostly collected from D. cinnabari, and is mentioned in the 1st century Periplus (30: 10. 17) as one of the products of Socotra. Socotra had been an important trading centre since at least the time of the Ptolemies. Dragon's blood was used as a dye, painting pigment, and medicine (respiratory and gastrointestinal problems) in the Mediterranean basin, and was held by early Greeks, Romans, and Arabs to have medicinal properties. Dioscorides and other early Greek writers described its medicinal uses.[3]

You can see quite a few videos on YouTube which show trees pumping out blood-coloured sap. They include videos cited by the BBC programme (Nature’s Weirdest Events) in the OP's question. However, from the looks of this report, the programme, after some generous speculation goes on to offer the following explanation:

And presenter Chris Packham added that it was by no means an isolated incident, with reports of ‘bleeding trees’ occurring across the world and everything from disease to ‘the supernatural’ being blamed.

The good news is that there does seem to be an explanation for the weird goings-on – with rising sap in the springtime apparently responsible.

‘The sap is at high pressure until the leaves open and begin to evaporate the water, any injury releases this pressure,’ Packham explained.

‘This apparent ‘bleeding’ can look distressing, but it may be the tree';s way of trying to heal.’

Here are some people of a scientific bent confirming that trees release sap to heal. As rjzii's answer notes, trees do exist with blood red sap.

Here is an image of the Marri tree of Australia leaking a red blood-like gum named Kino: 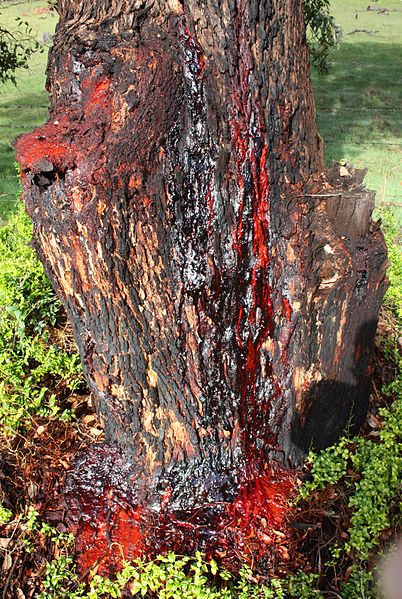 Here's a report in an Australian paper on a gum tree in NSW "bleeding" due to an attack by borers.