The Wired has published article "The Sickeningly Low Vaccination Rates at Silicon Valley Day Cares", in which they claim ridiculously low vaccination rates in daycare centers associated with some of Silicon Valley's tech giants. 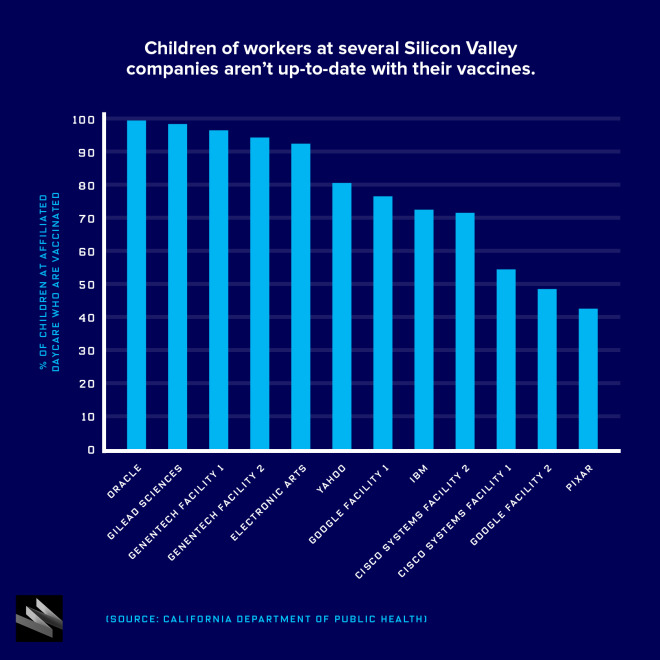 However, Google and Cisco claim these numbers to be inaccurate, and claim to have no PBEs (personal belief exemptions).

Now, on to dissection. A direct quote form the article:

Full stop right here. Think for a moment on this question: what percentage of people have below-average intelligence?

So, how many day care facilities should we expect to have below-average vaccination rates? About half. And how many will have above-average rates? Um, about half. And what does the chart say? 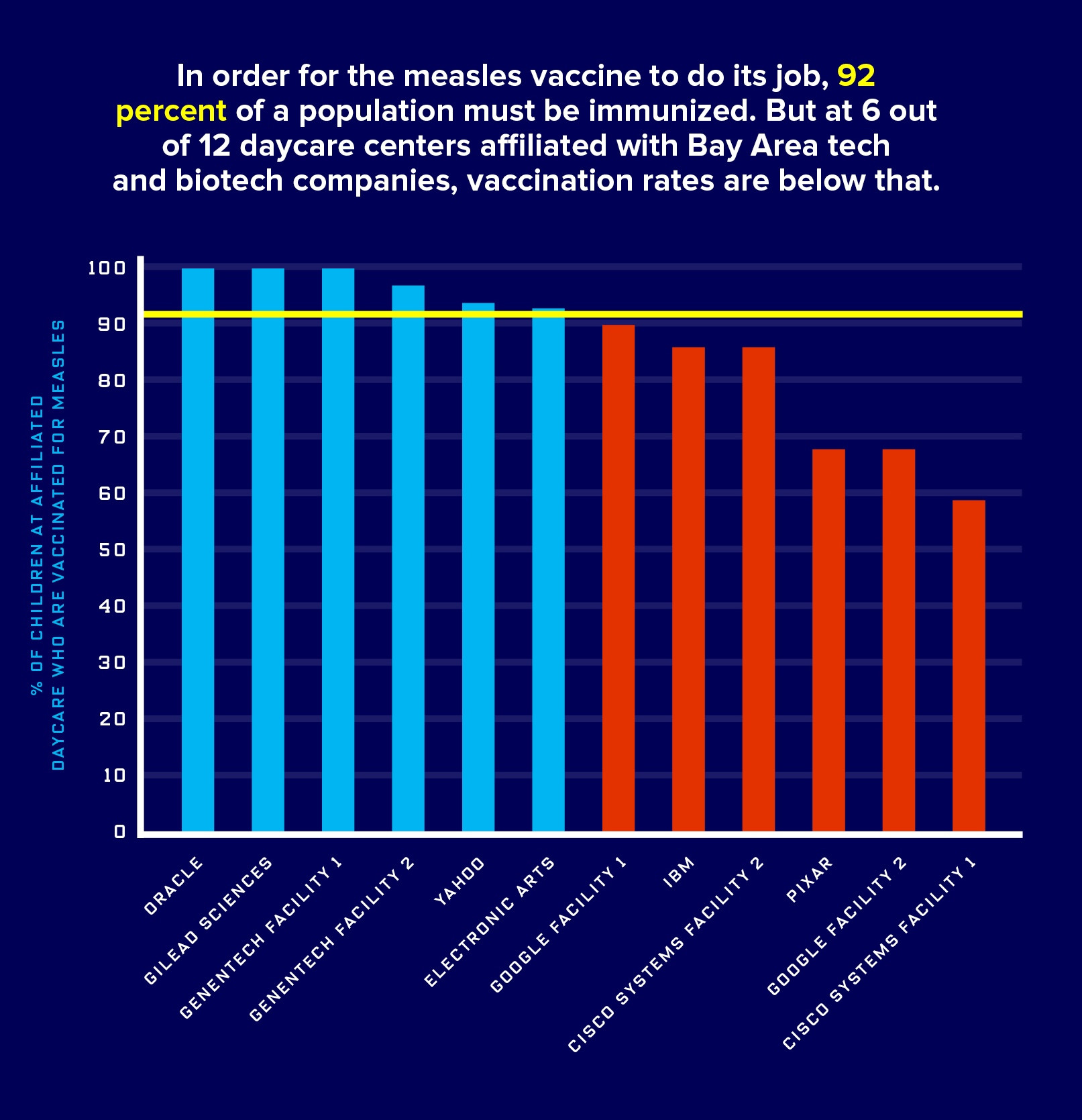 After all, half of all silicon valley day cares have above-average vaccination rates, right?

OK, perhaps I'm being overly harsh here about a minor...total demonstrated lack of understanding of statistics that should be part of the first four weeks of an undergraduate course in statistics. Maybe it's just a silly error.

Later they claim one terrible daycare has only a ~40% immunization rate, which is obviously a very significantly low score. Why is it that one so low?

But Google has a simple explanation—a representative chalked it up to old data. “In 2013-2014, these two childcare facilities had immunization rates of 98 percent and 81 percent,” says a Google spokesperson, emphasizing that immunization is important to the company. “The reported numbers for the current year are lower simply because many parents have not yet provided updated immunization records. We’ve asked them all to do this, so we can update the figures.”

If this claim is true, then the previous year immunization rate was extremely high and should have a headline of how great Google Parents are at vaccinating their kids. Yet the present rate has said to have fallen to half the previous year levels? That's not a statistical trend - that can only be explained by throwing out half the kids and getting a whole new set with extra-ordinarily low rates of vaccination. Is that claimed in the article?

No, and the writer of the article doesn't claim - or apparently investigate - if this perfectly reasonable sounding explanation is true or not.

Furthermore, there is another glaring error in the article - all throughout the article it cites information as being direct, these-kids-definitely-aren't-vaccinated - but that's not apparently the case! The data refers to the percentage of parents who have provided medical documentation establishing that their child has been vaccinated to their childcare facility. Big brother isn't in play here - Wired Magazine does not have access to private medical records. The report of evidence is not on child vaccination, but on paperwork.

So finally, I propose the best possible headline that this report and data as written can possible support:

Governmental Data Too Out Of Date And Incomplete To Draw Wide-Reaching, Judgmental, Damning Conclusions

Now there's an article I can get behind. I obviously have no future in journalism.

Not the answer you're looking for? Browse other questions tagged medical-science united-states vaccines .

23
Are there any other studies (besides the discredited Wakefield studies) that have found a link between vaccination and autism?
20
Have textile workers created such finely detailed textiles that they have gone blind?
2
Do most patients with chronic fatigue syndrome have low thyroid activity?
4
Is there correlation between vaccination rates and autism diagnosis?
5
Do Low-skill workers earn one cent in extra income for every 19 cents the government spends on walling off Mexico
2
Have COVID-19 vaccination trials started in Seattle?
21
Does West Virginia have higher literacy rates than states like New York, California and New Jersey?