Do girls get better grades than boys at school?

According to The Atlantic, it's not even a question whether it's true. It's just a question of knowing why.

According to the article it's based on "369 studies involving the academic grades of over one million boys and girls from 30 different nations."

In the United States, the federal Department of Education tracks GPA for graduating students. In "The High School Transcript Study" they report average GPA by gender. The table and figures don't reproduce neatly here, but they show that female students consistently outperform male students in GPA.

Their finding is robust across years (1990-2009), all core subjects (English, social science, physical science, math) as well as some other categories (other academic courses, other courses).

Although less descriptive, this finding is corroborated by ACT. Their single-page report, Gender Gaps in High School GPA and ACT Scores, shows that across all core subjects female students outperform male students academically.

One interesting caveat is that on science and math ACT exams, males do outperform females. ACT scores are not grades and don't (necessarily) influence the answer to this question, but it is worth thinking about why they may be different. The ACT page offers one explanation: that GPAs are cumulative, while ACT scores examine only a single point in time. They also point out that male students tend to perform less well in school in general (due to being less interested or having behavioral problems). There are likely other things to consider (bias in terms of registering for the ACT, whether the ACT score is related to academic performance).

Their PDF is embedded below. 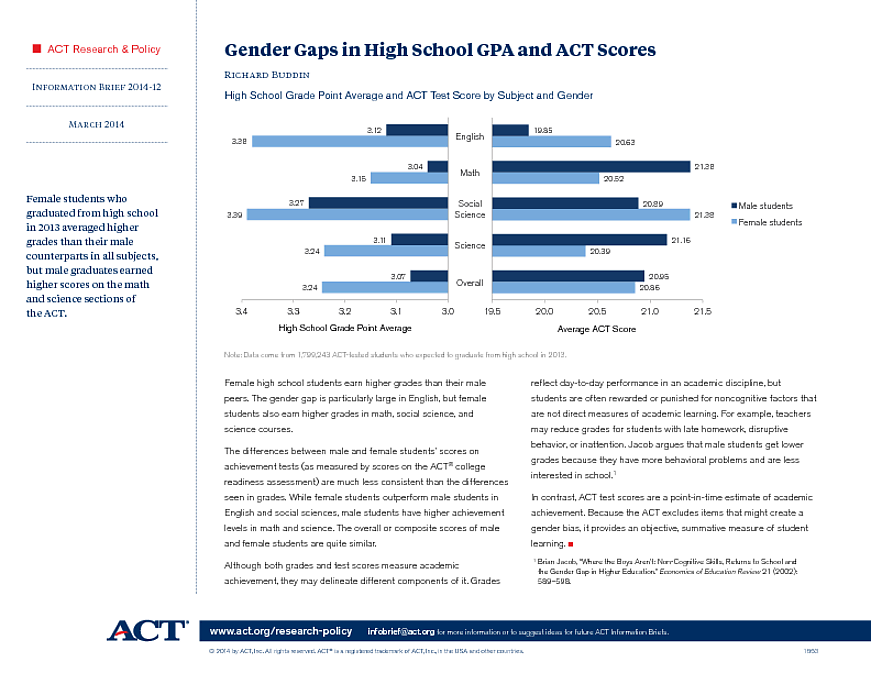 I'm not an education expert, but there does seem to be academic research that agrees. This literature review (Gender Differences in Scholastic Achievement: A Meta Analysis, Psychological Bulletin) examines 369 studies on gender and school achievement, and basically agrees that female students outperform male students.

The literature review includes research from nations other than the United States, providing some support for the belief that this is not purely an American pattern.

Not the answer you're looking for? Browse other questions tagged education gender .

35
Boys and girls and co-education: what works best?
77
Are girls and boys pre-programmed to behave... like girls and boys?
45
Are men smarter than women?
5
Can one hour of TV per day worsen GCSE grades?
16
Does having more women in a group increase its collective intelligence?
22
Is self-discipline more important than IQ in predicting academic performance?
8
Is at least $70 million in health care costs in the USA directly attributable to low literacy?