Does staring at a flame slow brain activity? 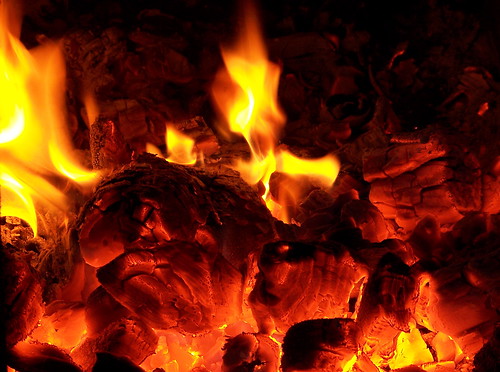 After a long search, the closest I could find to an answer is the following claim (by coincidence similar to my previous question)

Actually, the ancient Greeks noted the effects of visual flicker as early as 125 AD. They noticed that people often began to daydream or get sleepy when sitting around a flickering fire. This phenomenon is still true today. Since the flicker rate of fire light is rather slow, when you gaze in to a flickering fire, your brain activity tends to slow. This is why you might find yourself relaxing or even yawning around a kindling camp fire or a cozy fireplace.
—source

Question: Is this claim backed by real science?

Bonus Question: Is there any scientific explanation to why fires are mesmerizing?

No, staring at a flame will not slow brain activity.

First of all, let's define brain activity, and see what 'slow' would mean in this context.

I had a lot of trouble finding a source that's neither completely technical nor completely nonsensical. In the end I opted for a combination of the two. Here is a semi-nonsensical one from which I am quoting the good parts:

Neurons communicate with each other by electrical changes. We can actually see these electrical changes in the form of brain waves as shown in an EEG (electroencephalogram). Brain waves are measured in cycles per second (Hertz; Hz is the short form). We also talk about the "frequency" of brain wave activity. The lower the number of Hz, the slower the brain activity or the slower the frequency of the activity.

Therefore, neurons discharge at a certain rate, and we can measure this discharge rate (notably, a lot of neurons have to discharge simultaneously for us to pick it up). This happens pretty quickly, and is expressed in how many times per second a group of neurons discharges. When measured by EEG, it comes out as a wavy line on the screen; hence the concept of brain waves.

On to slow and fast brain waves:

Researchers in the 1930's and 40's identified several different types of brain waves. Traditionally, these fall into 4 types:

Since these original studies, other types of brainwaves have been identified.

So, neurons discharge at different rates, and these rates are associated to different brain states. The ones of interest to us right now are the alpha and the gamma waves, because they are typically connected to activity in the visual system.

The answer is: gamma. Fast waves.

From a Nature paper:

From the European Journal of Neuroscience:

Not the answer you're looking for? Browse other questions tagged neurology hypnotism fire .

41
Can I get high using binaural beats?

53
Do the Left Brain and Right Brain have different functions?
15
Does brain mass have any correlation to intelligence?
32
Does the brain use more energy during mental work?
8
Does brain consist of 20% Omega-3 fatty acid?
20
Does beer kill brain cells?
8
Is brain piercing real?
8
Death of brain cells