Is the IKEA catalogue being distributed in more prints than the Bible? 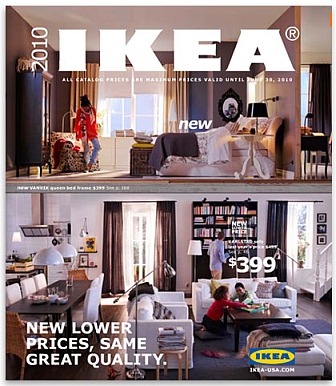 But Martin Roth wrote an article in 2002 where he was pretty sure that IKEA was close to beating the Bible in regard of worldwide distribution.

And in a 2005 update he estimated that IKEA had actually overtaken the Bible.

My question:
How does the IKEA catalogue hold up against the Bible in regard of yearly prints and worldwide distribution?

NOTE:
I'm not aksing if the Bible is the most read book. I'm interested in yearly, not all-time numbers.

NOTE 2:
After reading the comments I decided to explain my motivation behind this question.

I'm aware that "more copies" is not the same as "more read" or "more popular". But the numbers for the IKEA catalogue have increased, from 115 million in 2003 to 198 million in 2010 (see Peter's answer).
I assume IKEA wouldn't increase the number of copies if there wasn't a demand, after all printing them does cost the company money.

So even though the high print run doesn't necessarily mean it's also more read or more popular, it does seem to imply that the catalogue now reaches more people than any religious (or scientific) publication.

This makes me wonder: what does it say about our culture if the most distributed publication in our world is a furniture catalogue? (This is more of a philosphical question and therefore not part of my actual question)

At best, the answer to this question will be an apples and oranges comparison. Comparing the distribution of a static book to that of a constantly fluctuating periodical is unlikely to produce anything very meaningful. However it is amusing and I like both apples and oranges. So what can we do?

Start with the easy apples

The IKEA side of things is relatively easy. Because of their corporate business structure, the figures are centralized.

Last year 198 million copies of the catalog were printed in 56 editions and 27 languages. (source)

It is unclear what "last year" refers to. Other reports on the page run through 2009, so "last year" may refer to 2008 or 2009. On the other hand the charts might be old and the numbers might be newer. Either way, this is enough to ball park the number, which is more than we will be able to do for the second half of this comparison.

One extra note before we move on is that this number is measured at the press. This is not a number of copies distributed into hands that read them. Pure business sense demands that they have some percentage of over-printing so that stock in stores doesn't run out during the year. Additionally large numbers of copies end up being put to uses other than distribution for reading.

If you want to extrapolate some percentage of growth but also account for the number being print rather than received distribution, I think it's fair to ballpark a current figure in the 150-200 million copies per year range for 2012.

Now what do we do about the oranges?

Bible printing numbers are much harder to come by. There is no centralized organization that controls or that can even track production and distribution of printed Bibles. At best, we can identify some of the major players and extrapolate from there to arrive at an order of magnitude figure.

It seem that the media is fond of throwing around the "over 100 million Bibles per year" number, but I was unable to locate a source for it. It seems somebody pulled this out of their sleeve and it stuck. On examining some of the pieces, I think I would pull the same number out of my sleeve.

In the world of Bible printing and distribution, the United Bible Societies is undoubtedly one of the largest players. The group is made up of 146 national Bible Societies working in cooperation to pull off large scale translation, publishing and other logistical projects. There are many printing and publishing operations around the world that are completely independent, but UBS certainly has their hands in a lot of pies. There might be more important players when it comes to translation, but as far as printing and distribution go, they are heavy weight players.

In one entirely confusing piece of journalism, the LA Times reported in 1989 that the 1988 numbers for world wide Bible distribution through the UBS alone crossed the half a billion mark to hit 692,754,925. Exactly. What the article fails to do is identify the difference between "Bibles" and "Scriptures".

Bizarrely, their fancy annual report for 2012 includes no useful data on distribution. There is information on training events, book fairs, translation efforts, printing and distribution centers, but no distribution numbers.

More focused reports from 2009 and 2011 shed some light on the matter.

In 2009, 29M full Bibles and 11M New Testaments were distributed. For the sake of this question, I think it's reasonable to lump New Testaments and full Bibles together. This makes something on the order of 40 million copies distributed by UBS during 2009. The 2011 numbers were 32M for Bibles, so there is some growth but only a percentage that won't make or break our comparison either way.

What isn't lumped into that number is "Scripture" printings that are not full Bibles or even full New Testaments. It is quite common to print and distribute large numbers of selections such as The Gospel of John or the Psalms. The distribution numbers for these printed materials is easily an order of magnitude larger than full Bibles. Using the same UBS report for 2009, approximately 400 million such resources were distributed in the same year as the 40 million Bibles through UBS alone.

This is still oddly less than the LA Times report two decades earlier. I think the difference is accounted for by including other non print media. By any accounting, that number is likely massively higher now.

The UBS may be big, but they aren't the only ones in their class

The Gideons International prints and distributes massive quantities of Bibles. Again, "last year" isn't clearly identified, here is what they currently report about themselves:

Again I think it's fair to lump NT and full Bibles together, but for reference the overall ratio for the Gideons appears to be about 8 to 1 (source, only USA distribution break down available). That would put The Gideons at about 10 million full Bibles and 70 million New Testaments per year. For ideological reasons, as an organization they are pretty focused on Bibles rather than partial printings. They do a lot more NT's than even all of UBS combined, but they don't do as many excerpt printings such as Gospel of John tracts.

And some smaller fish to fry

There are other players as well. Several other large Bible producers including the International Bible Society, The Catholic Bible Federation and The Trinitarian Bible Society are not part of UBS. I was unable to find concrete numbers for many of these. I think there are a couple 5 million range players. Dozens of smaller ones appear to distribute in the 0.5-2 million Bibles per year range.

An oddball I couldn't place above is Zondervan publishing who sells a lot of English and some other language Bibles, but it's hard to get a breakdown of Bibles vs. other materials. The NIV translation which they own the publishing rights to used to be the highest selling translation in English, but I don't know to translate that to Bibles per year worldwide.

It's hard to put a number on it, but realistically I think counting UBS and Gideons as the lions share at a total of 120 Million per year is a reasonable baseline. Those two alone do put current numbers in the "over 100M per year" ball park thrown around by the media.

Trying to add up numbers for all the small fish is harder, but in order to beat out the IKEA catalog, all the small guys would need to add up to at least 60 million/year. In adding up onezyes and twozies, I got to a possible 25 million more, but was running low on sources.

I can only account for up to about 150 million Bibles distributed per year.

Conclusion of Rosaceae vs. Rutaceae, or "How about them apples?"

Clearly 150-200 million IKEA catalogs beats out a max of about 150 million print Bibles distributed per year. Just as clearly, if you include partial printings that are portions of Scripture such as The Gospel of John booklets, the catalog figure is dwarfed by the 500+ million number of the UBS alone. If you include such partial printings from all sources, the number might be pushing a billion and IKEA catalogs aren't in the same order of magnitude.

Why the question is flawed

In the end it isn't the apples to oranges nature of the numbers that is this question's achiles heel. It is the implication that the numbers point to something else. Note this quote from the question:

In the end it is not yearly printing or distribution numbers that determine "prevalence".

[...] it does seem to imply that the catalogue now reaches more people than any religious (or scientific) publication.

According to the official IKEA site, they printed 198 million copies of the 2010 catalogue in 56 editions and 27 languages.

The distribution statistics for the bible are much harder to assess, since it is distributed by many different publishers, and there is contention about which Christian sects' version of the bible you consider, and whether or not translations count. .

I cannot find a reliable source for the number of bibles sold each year worldwide, but according to my google searches, 100 million seems to be a popular guess.

Thus, I do not think it unlikely that more copies of IKEA catalogues than bibles were distributed in 2010, but it is nearly impossible to be much more certain.

Not the answer you're looking for? Browse other questions tagged bible media religious-texts .

29
Is the Bible the most read book?

29
Is the Bible the most read book?
18
Was the character of Lilith written out of the Bible?
26
Do the majority of Americans take the Noah's ark story from the Bible literally?
13
Did William Shakespeare help make the KJV bible?
5
Is the name of Prophet Muhammad mentioned in the Bible?
12
Is the Bible (Christian and Hebrew) the first one to suggest that the Earth is a sphere?
9
Is the bible the most shoplifted book?
23
Has anyone ever memorized the entire bible?
5
Did Winston Churchill say the King James Bible had been translated into more than 760 languages?