Are most adults lactose intolerant?

Wikipedia quotes some referenced journal article from 2007 as follows (which itself appears to reference another article from 1994, behind a paywall, so, I have no idea whether they've misinterpreted it or not):

Adult-type hypolactasia is characterized by a fall of lactase activity levels to 5 to 10% of birth levels occurring during childhood and adolescence. The condition affects more than 75% of the population worldwide

Is the claim above true?

Yes. Most adults, worldwide, are lactose-intolerant.

I found many papers explaining this, but perhaps the most convincing that I found is this one:

The ability of adult humans to digest the milk sugar lactose - lactase persistence - is a dominant Mendelian trait that has been a subject of extensive genetic, medical and evolutionary research. Lactase persistence is common in people of European ancestry as well as some African, Middle Eastern and Southern Asian groups, but is rare or absent elsewhere in the world.

So, this has been studied carefully; it isn't just a misunderstanding.

This paper attempts to identify to what extent the known genetic causes can explain the known differences in prevalence of lactase persistence (i.e. milk tolerance)/

An estimated 65% of human adults (and most adult mammals) downregulate the production of intestinal lactase after weaning. Lactase is necessary for the digestion of lactose, the main carbohydrate in milk, and without it, milk consumption can lead to bloating, flatulence, cramps and nausea. Continued production of lactase throughout adult life (lactase persistence, LP) is a genetically determined trait and is found at moderate to high frequencies in Europeans and some African, Middle Eastern and Southern Asian populations.

So, most adults become incapable of digesting milk as they get older.

The paper includes a link to a spreadsheet with 227 locations, and the prevalence of lactase persistence, so the raw data is there to check their estimates.

They also provide a figure (of the "Old World" - excluding the Americas) to help you visualise it. (Note: This diagram shows the proportion of people who CAN digest milk.): 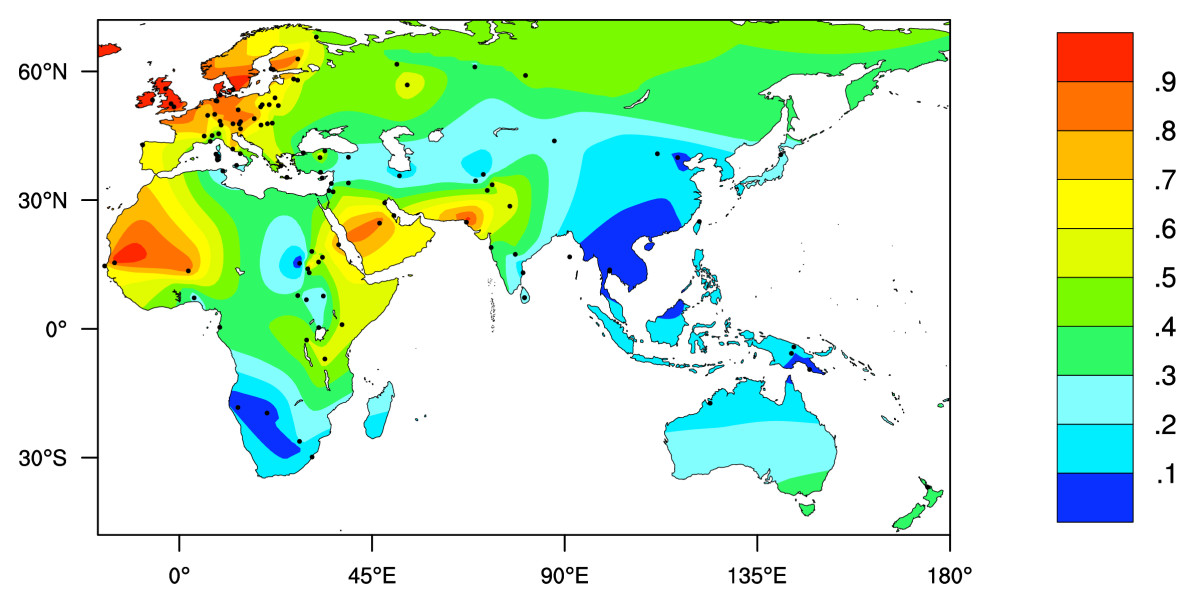 As can be seen, vast areas of the old world are green and blue - where the majority of adults are lactose intolerant. Nonetheless, larger parts of Europe have a higher prevalence of lactase persistence.

Wikipedia explains that this understanding has been fairly recent.

until the 1960s, the prevailing assumption in the medical community was that tolerance was the norm and intolerance was either the result of milk allergy, an intestinal pathogen, or else was psychosomatic (it being recognised that some cultures did not practice dairying, and people from those cultures often reacted badly to consuming milk). Two reasons were given for this perception. Firstly, many Western countries have a predominantly European heritage, so have low frequencies of lactose intolerance, and have an extensive cultural history of dairying. Therefore, tolerance actually was the norm in most of the societies investigated by medical researchers at that point. Secondly, within even these societies, lactose intolerance tends to be under-reported: genetically lactase nonpersistent individuals can tolerate varying quantities of lactose before showing symptoms, and their symptoms differ in severity. [...] Subsequent research revealed intolerance was more common globally than lactase persistence

7
Is lactose intolerance an outdated diagnosis for discomfort after milk ingestion?

31
Are saturated fats unhealthy?
27
Are there no naturally blue foods?
12
Are low-salt diets effective?
8
Are wine ratings consistent?
36
Are most of the nutrients of vegetables and fruits contained in the peel?
12
Are chickens fed arsenic?
13
Do 7% of adults in the United States believe that chocolate milk comes from brown cows?
7
Is lactose intolerance an outdated diagnosis for discomfort after milk ingestion?
18
Are most humans infected with parasites that water fasting can eliminate?