Were postal stamp depicting LTTE symbols and its chief, Prabhakaran, released by government of France?

There were news saying that France has issued or released a postal stamp of LTTE chief Prabhakaran. I am wondering if such stamps were issued by the French postal services.

Here are the some sources reporting the story:

About LTTE and Prabakaran:

LTTE - Liberation Tigers of Tamil Eelam and Prabakaran in the leader, mentor and chief of this organization.

"Although there are a lot of extremist and rebel groups in this world, few of the are rebellious but not terror organization like LTTE" - Hillary Clinton.

This organization was started for civil rights that are ran towards democracy in SriLanka. It was supported and funded by Indian government until the death of Rajiv Gandh. Srilanka is not 100% democratic country, like USA, UK and India.

Post stamps bearing the image of Prabhakaran and other LTTE symbols were issued in France, not by the French government but by private users using the ability to create personalized post stamps from an image uploaded by a user. The French government has issued an apology for this, as they consider LTTE to be a terrorist organization.

Images of the stamps (from Colombo Telegraph): 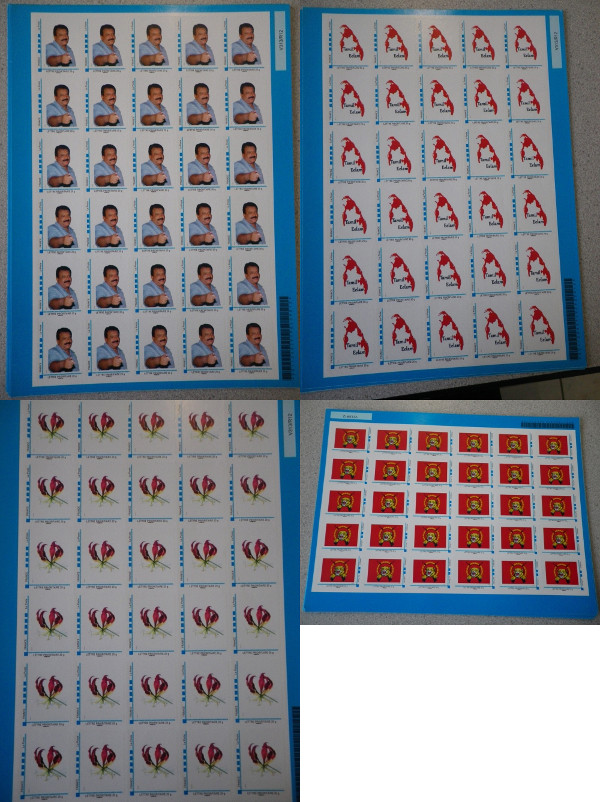 The declaration in the site of the French Embassy in Colombo:

Following reports published in different newspapers regarding the issuance in France of stamps bearing pictures and symbols of the LTTE, the Embassy of France in Sri Lanka wishes to inform the media and the Sri Lankan public that no such stamp is part of the official philatelist programme of France, neither on sale in the French post offices. The French Postal services, “La Poste”, offers an online service through which customers can order limited quantities of personalized stamps under their responsibility and under specific conditions. It appears that individuals have used this service to order the above mentioned stamps.

“La Poste” recognized that they failed to detect that the conditions had not been met and that some of these stamps have been printed by mistake.

Having been informed by the French Ministry of Foreign Affairs that LTTE is a movement which has been listed since 2006 as a terrorist organization by the European Union, “La Poste” assures that no such stamp will be printed further.

Since 1991, le “Groupe La Poste”, of which French postal services are a part, is an independent public, industrial and commercial institution.

On the 4th of January 2012, the French Ambassador has reconfirmed the elements of the press release in a TV interview at the SLRC channel , and added :

"It is a very unfortunate and regrettable error for which La Poste apologized to the SL Embassy in Paris.

I would like to seize the opportunity of this voice cut with Sri Lanka Rupavahini Corporation to reaffirm that France strongly condemns all form of terrorism all over the world and that the French government could in no way have supported an initiative aiming at backing the LTTE. "

The same happened to Norway in 2012, and they also issued an apology to the Sri Lancan government:

From the Sri Lankan Ministry of External Affairs site:

The Norwegian Postal Authority, Posten Norge, has issued an apology to the Sri Lankan Ambassador in Oslo, Mr. E. Rodney M. Perera, for the recent issuance of LTTE stamps in Norway. In his letter addressed to the Ambassador of Sri Lanka, the President & CEO of Posten Norge, Mr. Dag Mejdell, states, inter alia,

It is of utmost importance to us that these stamps [featuring LTTE symbols] are not related to any official stamp issue by Posten Norge. This is related to a production of “personal stamps” which can be ordered through our webshop by anyone, choosing a personal image by themselves. All orders related to personal stamps are checked by us, and it is our policy never to produce stamps showing “illegal, inappropriate or improper” images. Unfortunately, we regret to learn that the order in question passed our quality and assurance control without being stopped.

These stamps were ordered in a very small quantity. The customer has been informed that the order is violating the conditions for ordering personal stamps and the user account has been closed.

Please accept our sincere apologies for the inconvenience caused by having delivered personal stamps with the LTTE image.

And in Canada in 2011 a similar attempt was made but the Canadian postal services identified it and rejected the request, from Daily Mirror:

The original request for a personalised pro-LTTE postage stamp in Canada depicting ‘Tamil Eelam’ had been turned down by the Canadian postal service in May 2011, the Canadian High Commission in Colombo said yesterday.

A spokesperson for the Canadian High Commission when contacted by the Daily Mirror said, “The original request for the personalised stamp in question was submitted to Canada Post through its Picture Postage website in May 2011. The submission was rejected and the payment was returned to the requester. The representative advised that officials of Picture Postage had determined that the image was not appropriate as a Canadian postage stamp.”

“Such a stamp was never in legal Canadian circulation. Further investigation of Canada Post’s internal records confirmed that no other requests of this nature had been received since May 2011,” the spokesperson added.

Not the answer you're looking for? Browse other questions tagged france mail .