Did switching to a common currency cause prices to go up in European countries?

Many consumers in the European Union are afraid of switching to Euros since it (reportedly) means increased prices on most products. For example:

In order to address consumers' concerns about price increases and abusive practices during the changeover period, a campaign called the Memorandum on Good Business Practice upon the Introduction of the Euro was launched in August.

Is there any causation between switching currencies and a significant increase in prices?

According to numerous studies some of more visible prices go up significantly, however overall the price increase is very limited.

OECD paper analyzing the subject few months before Slovakia switched to Euro and predicting what effect it could have on Slovak economy:

THE EURO CHANGEOVER IN THE SLOVAK REPUBLIC: IMPLICATIONS FOR INFLATION AND INTEREST RATES

by Felix Hüfner and Isabell Koske

The cash changeover can be expected to lead to significant price increases in a number of sectors, most notably in sectors related to recreational activities. The impact on the aggregate HICP, however, is likely to be small. Applying the experience of existing euro area member countries on the case of the Slovak Republic, the cash changeover is estimated to increase aggregate consumer prices by 0.32 percent between July 2008 and July 2009. 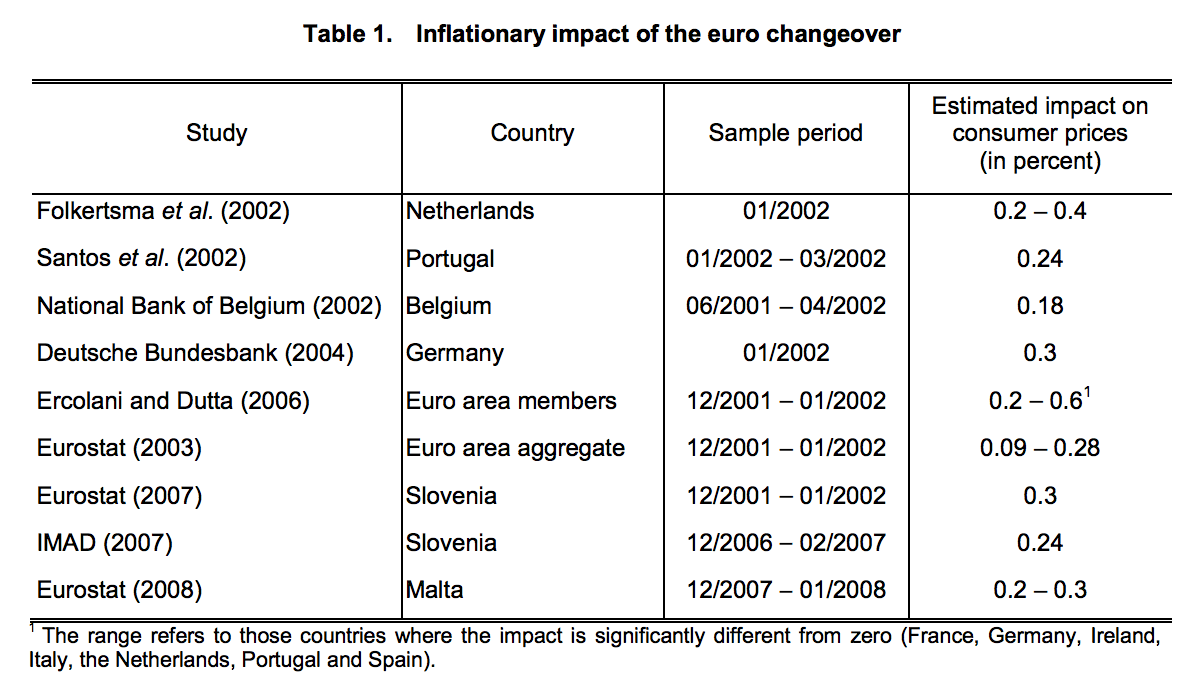 Most empirical studies on the price level effect of the euro changeover focus on individual euro area member countries. Examples include: Buchwald et al. (2002), Chlumsky and Engelhardt (2002) and Deutsche Bundesbank (2002, 2004) for Germany; Folkertsma et al. (2002) for the Netherlands; National Bank of Belgium (2002) for Belgium; Pollan (2002) for Austria; Santos et al. (2002) for Portugal; and, more recently, Eurostat (2007) and the Institute of Macroeconomic Analysis and Development (IMAD) (2007) for Slovenia; and Eurostat (2008) for Malta. These studies commonly find that price increases were not a general phenomenon but limited to certain categories of goods and services, so that their impact on aggregate consumer price inflation was modest. Most studies estimate the effect at around 0.2 to 0.3 percent which is in line with the estimate published by Eurostat (2003) for the euro area as a whole (see Table 1). Nonetheless, prices have risen markedly in some sectors, particularly in some service sectors where the above mentioned studies have singled out restaurants and catering, hairdressers, cinemas, and dry cleaning as sectors with significant price increases.

Actual effect in Slovakia was even lower than predicted in the paper, overall price hike of 0.2%.

I am Italian, and can confirm that most of the prices doubled in the two years after the introduction of the Euro.

For the first year we had double currency, with merchants forced to show both prices. In that period prices stayed basically unchanged.

On the second year the double pricing stopped and most commodities went up rapidly. The merchants played on the habits of people and visual impact of prices. I'll try to explain:

Say a piece of bread was 500 Lire (Italy's currency). People are used to see 500 on the price tag. Post Euro, the bread was 50 cents. Now people would still see "5" and unconsciously think it's the same price.

This way, raises went (almost) unnoticed, until people people found their purse was much lighter at the end of the month. 1 EUR was 1936.27 Lire hence selling bread at 50 euro cents is 968.14 Lire i.e. almost double price!

Friends from Spain and Greece confirmed the same happened to their countries.

At the page http://www.aduc.it/comunicato/prezzi+aumento+pane+responsabili+commercianti_12447.php you can read an official report from ADUC (Italy's Consumers Association) where it states that the price of bread went up from 1.03 to 2.5 EUR/Kg between 1995 and 2006 (an increase of 380%). The news also states that the increase in prices was due to merchants rather than increase in resources.

Not the answer you're looking for? Browse other questions tagged europe currency .

25
Did people blaspheme deliberately to be tried in the Medieval European Inquisition courts instead of other secular courts?
8
Did European Muslim protestors carry signs "Shariah for the Netherlands", "Islam Will Dominate the World, Freedom Can Go to Hell"
12
Did France flood Guinea with counterfeit currency to destabilize it?
20
Did (former) German Minister Manfred Lahnstein admit that Germany wanted the EMS in order to get a competitive edge over other European countries?
6
Did "the" (or a) European Court declare that Covid-19 PCR tests are "not fit for purpose"?