Did a woman find a chicken head in her McNuggets?

A story circulated some time ago, and it occasionally comes back to life within social media, that once a woman found a chicken head inside her child's chicken nuggets at McDonald's. 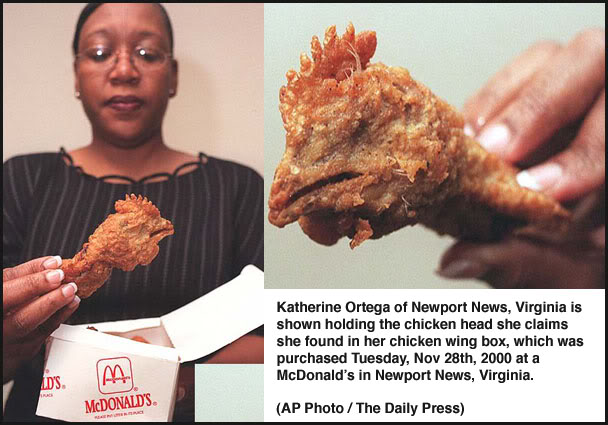 So, I would say that it is true that a woman claimed to have found a chicken head in her meal, but how it got there is not known.
There's no reporting on any court case, although it might have happened too long after the event to be considered newsworthy. I looked for cases in the town's civil court with the name Ortega, but drew a blank. I might be looking in the wrong place, as I don't know if the civil court would be the correct place for such a hearing. As Snopes points out;

"Katherine Ortega has posed for a number of photos of her holding the chicken head, which may work against her if she tries to seek compensatory damages for psychological harm arising out of the incident. A jury will have a difficult time believing she is now nauseated by chicken or has difficulty sleeping after being presented with photographic evidence of her repeatedly and voluntarily handling the offensive item."

So, in all likelihood, there was a chicken head, but there was no court case.

Not the answer you're looking for? Browse other questions tagged commerce .

42
Did removing one olive lead to an airline saving thousands of dollars?
35
Did Apple sue New York city over the nickname Big Apple?
10
Did Monsanto buy and/or hire Xe/Blackwater/Academi?
21
Did a 700 percent increase in pencil sales occur in Britain on the back of the Sudoku boom?