I found this fact on OMG Facts:

Not surprisingly, Russia was the country with the highest WW2 causalities, with over 21 million.

I can't find any source for the figure beyond fact-list websites. Is this true?

That seems high? I expect "80%" possible and even plausible, but the one piece of data which I'm going to present (below) suggests "40%",

There's data referenced in Uncounted Costs of World War II: The Effect of Changing Sex Ratios on Marriage and Fertility of Russian Women, which says there ended up being a male/female sex ratio of 0.6 to 1 for that cohort.

But these are numbers for Russia, not the whole Soviet Union:

It's easy to imagine most of the men of fighting age dying, in places like Leningrad.

Russia accounts for maybe half the population of the USSR, the next largest being the Ukraine. Given that there was mass conscription I'm going to guess that Russian losses were representative of those of the USSR as a whole (though it also wouldn't surprise me if Ukrainian casualties were higher).

The surprise attack on the woefully unprepared Red Army led to devastating losses for the Soviet Union in the early phase of the war: within the first six months, the Red Army had lost nearly 5 million men – the size of the Soviet Union’s entire prewar army – and had lost territory equal to the size of the United States between the East Coast and Springfield, Illinois (Glantz 2005).

The Soviet Union mobilized all possible resources in its subsequent fight for survival and ultimate victory. The need for manpower dictated a significant loosening of the age and nationality restrictions on conscription of Soviet citizens; it is reported that men “well under” the age of 18 and exceeding 55 years of age were conscripted into the Red Army, with Russians and non-Russians alike required to serve (Glantz 2005).

One anomaly that is not explained is there is an apparent discontinuity in the graph for Figure 3 on page 30: 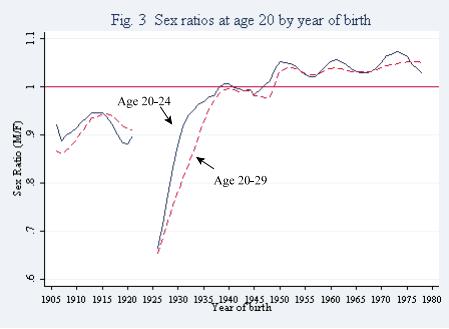 But perhaps that's not proof that the numbers are 'off the scale' then, but rather it's because there are no census numbers for that date-range ("at age 20"), because it's while the war is actually happening.

Depending on what version of this claim you read, they will state 80% died "in WWII" or "did not survive WWII". Either way, the implication is 80% of the male population of 1923 was killed during WWII implying some colossal slaughter. It turns out the slaughter had happened long before.

Mark Harrison did research and a write up on this very statement. This conclusion was that half that population was already dead when the war broke out from infant mortality, disease, famine, and Stalin's purges.

Here's the numbers I worked from on the programme(in thousands, rounded to the nearest hundred thousand). Each of the lines is sourced below.

The Buzzfeed claim is overstated, although not by a wide margin. Around two thirds (more exactly, 68%) of the original 1923 male birth cohort did not survive World War II. But the war is not the most important reason for the poor survival rate; almost half of them died before the war broke out.

One can say 40% of Soviet males born in 1923 who survived to see WWII died in WWII. Still pretty damn brutal.

11
How much traces lasting a million years would human civilization leave after perishing?
22
Did the Soviet Union ban microwave ovens in 1976?
5
Were many Ukrainian and Polish women raped by Soviet soldiers during the WWII?
8
Did 40% of the NKVD (Soviet police) leadership have Jewish nationality?
36
Did the Soviet Union murder over 20M people under its control after the war?
11
Could 10-15 million Congolese people have died during the reign of Leopold II?
23
Was the safety of a WW1 helmet called into question because survivorship bias was neglected?
6
Did the US break several treaties with the USSR/Russia after 1918?