Are members of organized rape gangs in the UK mostly of Kashmir / Pakistani origin?

On BBC three's Free Speech, Does ‘rape culture’ exist in the UK?, James Delingpole, Executive Editor Breitbart London made a claim (4:10 mark) that was followed by boos from the audience and a charge of spreading lies from fellow panelist Nelufar Hedayat:

[James Delingpole]: One of the points you made, you referred I think to the grooming gangs in Rochdale and in Rotherham, and it's not just in the north it's in Telford, in Norfolk it has happened. We have got these organized gangs, mostly of Muslim origin. I think we just need, [...] . It's a fact!

[Nelufar Hedayat]: It is also a fact that a majority ...

[James Delingpole] Can you let me finish, thank you very much.

[James Delingpole]: You outrageously interrupt me. I am not spreading lies. Why dont you read ...,

[Nelufar Hedayat]: How could you possibly do that. I am just telling you what the member of that audience... they are screaming at you.

[James Delingpole]: why don't ...., why don't you read the newspapers. If you look at the names that have come up in the court cases you will find that most of them are of Kashmiri/Pakistani origin.

[James Delingpole]: You talk about rape culture. It's a very pretty state of affairs when the police and the social workers would not deal with this problem, because they were too embarrassed about being called racist.

CEOPS (Child Exploitation and Online Protection centre) issued a report that deals in part with the UK "grooming gangs". With regard to the ethnic make-up of these gangs, they say

Ethnicity descriptors remain imprecise and as not all police forces responded to CEOP’s information request, the data is incomplete. Using broad groupings, all ethnicities were represented in the sample, however, a disproportionate number of offenders were reported as Asian. Of the 52 groups for which usable ethnicity data was provided, 26 (50%) comprised all Asian offenders, 11 (21%) all white offenders, 9 (17%) groups comprised offenders from multiple ethnicities, 4 (8%) comprised all black offenders and there were 2 (4%) groups of exclusively Arab offenders. Of the 306 offenders whose ethnicity was provided for type 1 offending, a total of 75% were categorised as Asian, 17% were categorised as white, and the remaining 8% were categorised as black (5%) or Arab (3%). This is in contrast to those identified in type 2 group offending, who were reported as exclusively of white ethnicity. From Threat Assessment of Child Sexual Exploitation and Abuse (p.18)

Based on the UK Ministry of Justice data, 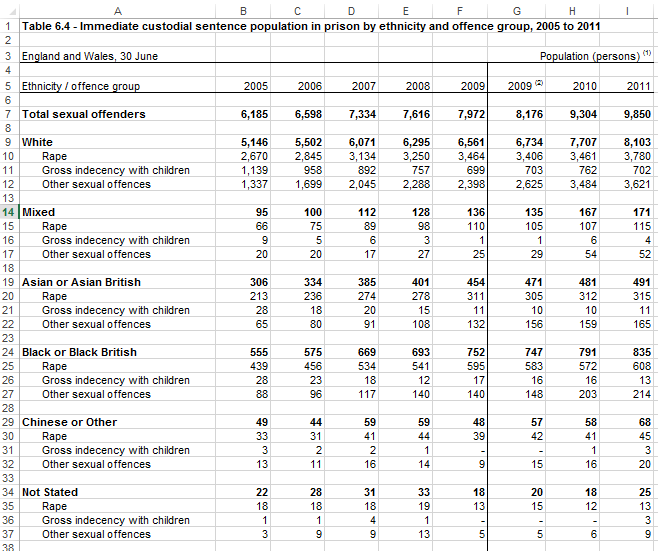 the ethnic origin of rapists in prison for rape and other sex offences is overwhelmingly white. Therefore, the question, as phrased, has the clear answer of NO.

Not the answer you're looking for? Browse other questions tagged criminology united-kingdom sexual-abuse .

11
Are frat members more often involved in rape?
20
Are annual female rape and male "made to penetrate" rates similar in the US?