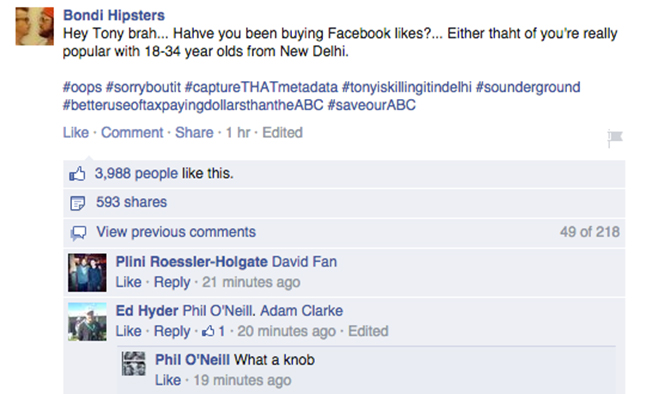 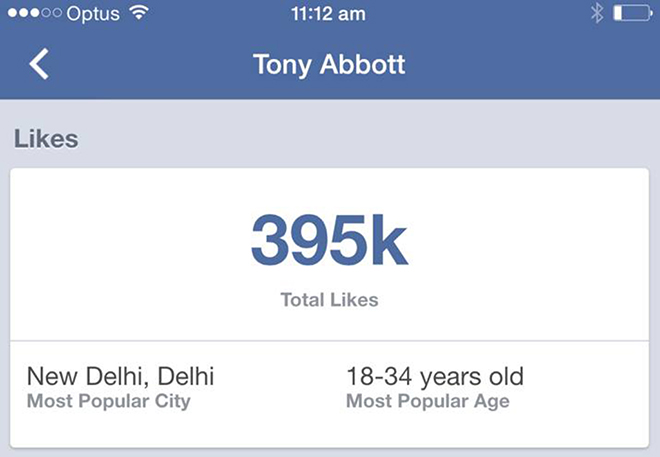 Are the Facebook 'likes' Abbott has received from India real, or fake? (I'm not really concerned whether Abbott bought the likes, or whether they were fake likes from a like farm liking pages at random to make themselves look less suspicious.)

So, like, likable: Tony Abbott's Facebook popularity soars thanks to Narendra Modi indicates that Indian PM Narendra Modi has a lot of facebook fans, and getting mentioned by him may have slashdotted Abbott:

But a spokeswoman for Mr Abbott said the increased traffic was genuine and that no "likes" or advertising had been purchased for the Facebook page.

"These visits attracted large international audiences to the Prime Minister's social media channels, thus generating a spike in organic engagement with the page."

Earlier this month Mr Modi posted photos with Mr Abbott during his visit to Australia for the G20 summit.

Mr Modi has more than 25 million Facebook likes and 8.17 million Twitter followers. A selfie with Mr Abbott posted to his Facebook account with the a caption that read "With my friend Tony Abbott at the MCG" received more than 710,000 likes and was shared more than 11,600 times.

Other photos of the two leaders also received hundreds of thousands of likes.

Mr Modi is particularly popular with young Indians and has been dubbed the "rock star Prime Minister".

Tony Abbott’s Facebook popularity skyrockets all thanks to one selfie argues that Abbott's spike in popularity coincided with a November 18 selfie with Modhi (note: false bottom graph) 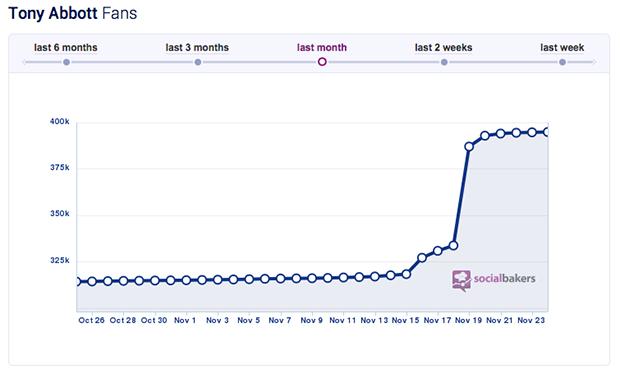 Tony Abbott is Mystifyingly Popular in New Delhi's Facebook Community (by Pedestrian.tv) notes that his Indian likes are still in the minority:

Statistics gleaned from social media analysis site Social Bakers indicate that somehow, even if the popular majority of Prime Minister Abbott's fans are 18-34 year old New Delhi residents, his newfound New Delhi fan base only accounts for 15.5% of his total audience.

Socialbakers has looked at Tony Abbott's popularity by country:

No other country had more than 1% of his fan base.

Not the answer you're looking for? Browse other questions tagged australia india tony-abbott .

27
Is this meme about the former prime minister of India true?