Did a pastor undress and kiss his female church members' behinds to help them find a husband?

I came across this article from Facebook where this site (Warning: Site contains nudity) claims a pastor asked his female members who are spinsters to a beach where they were asked to undress and were kissed on their behinds as a sign for them to receive their prospective husbands which they quickly agreed to.

Is this fake? I can't imagine this actually happening. Here is the picture of it supposedly happening, I erased all indecencies. 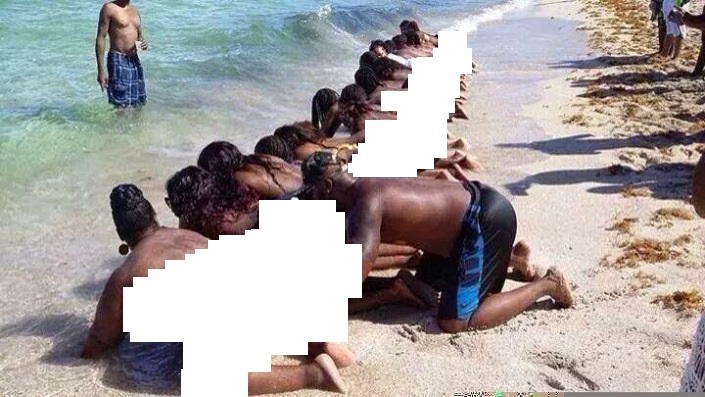 All links below potentially contain nudity.

The earliest occurrence of this image I could find is dated Wednesday, November 19, 2014 (found via search on cknnigeria.com hinted by "photo from CKN" attribution via Lamzat via GIS).

All other mentions of this story and Google-indexed images appear to be YouTube, social media, or other blogs picking up on this. As far as I can tell, the CKN article appears to be the origin of the story, all photo credits that I could find are rooted at CKN. The article itself does not go into detail:

The world is truly coming to an end..It has been revealed that the pastor in this picture asked his female members who are spinsters to a beach where they were asked to undress and were kissed on their ass as a sign for them to receive their prospective husbands which they quickly agreed to..Can you imagine such madness.

CKN does not cite the origin of the image in their article.

While CKN does run stories of corruption among pastors, the comments there are also mostly incredulous and the story does not contain concrete information; certainly not enough information to verify that it is true. It really could be a picture of anything, the context is completely unknown, and any claims of its origin are entirely unreliable.

As for the comment about the man in the background:

It just looks to be a cup of some sort, with a similar color to the water, a coincidental (but not strange) alignment with the edge of his pants, and detail lost due to camera quality and image compression. This also makes sense given his pose, and the context (it is reasonable to stand in the water while holding a drink). In any case I can't imagine why any reasonable fakery in this image would result in that particular glitch, or why an image such as this would be faked in the first place (as it contains no visible indication that the claimed story is true anyways -- there would be no gain).

Not the answer you're looking for? Browse other questions tagged christianity .