Did humans almost become extinct about 70,000 years ago?

I received this screenshot which is actually a post on Facebook by 8facts. It claims that humans nearly became extinct 70,000 years ago when the population sunk to 2,000. 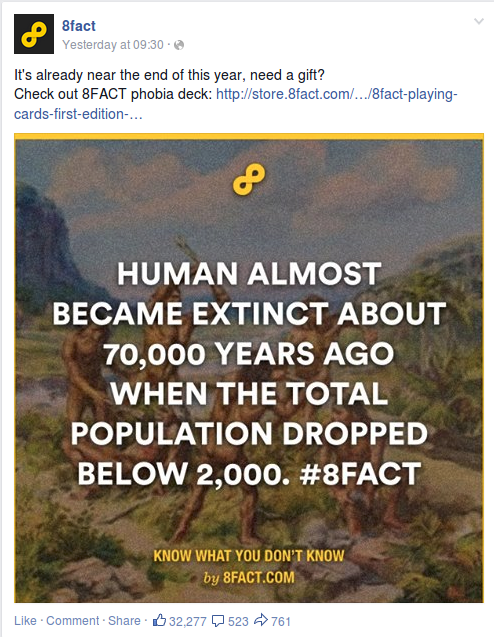 Is there any evidence that this claim is correct?

Possibly, but maybe not as severe as suggested. Basically the eruption of the Toba supervolcano caused a volcanic winter that decimated the human population at the time. There is evidence of this in the human genome. DNA mutates at a reasonably steady rate, so by looking at the genetic diversity of humans we can see that the population must have been very homogenous (i.e. small) at some point around 60K years ago.

The “Weak Garden of Eden” model for the origin and dispersal of modern humans (Harpendinget al., 1993) posits that modern humans spread into separate regions from a restricted source, around 100 ka (thousand years ago), then passed through population bottlenecks. Around 50 ka, dramatic growth occurred within dispersed populations that were genetically isolated from each other. Population growth began earliest in Africa and later in Eurasia and is hypothesized to have been caused by the invention and spread of a more efficient Later Stone Age/Upper Paleolithic technology, which developed in equatorial Africa.

Climatic and geological evidence suggest an alternative hypothesis for Late Pleistocene population bottlenecks and releases. The last glacial period was preceded by one thousand years of the coldest temperatures of the Later Pleistocene (∼71–70 ka), apparently caused by the eruption of Toba, Sumatra. Toba was the largest known explosive eruption of the Quaternary. Toba's volcanic winter could have decimated most modern human populations, especially outside of isolated tropical refugia. Release from the bottleneck could have occurred either at the end of this hypercold phase, or 10,000 years later, at the transition from cold oxygen isotope stage 4 to warmer stage 3. The largest populations surviving through the bottleneck should have been found in the largest tropical refugia, and thus in equatorial Africa. High genetic diversity in modern Africans may thus reflect a less severe bottleneck rather than earlier population growth.

Volcanic winter may have reduced populations to levels low enough for founder effects, genetic drift and local adaptations to produce rapid population differentiation. If Toba caused the bottlenecks, then modern human races may have differentiated abruptly, only 70 thousand years ago.

Alternatively, Wikipedia's article titled Toba catastrophe theory links to a BBC News article, When humans faced extinction. This BBC News article gives the 70,000 and 2,000 figures, so that may well be the source of the claim:

Humans may have come close to extinction about 70,000 years ago, according to the latest genetic research.

Researchers from Stanford University, US, and the Russian Academy of Sciences compared 377 microsatellite markers in DNA collected from 52 regions around the world.

The small genetic diversity of modern humans indicates that at some stage during the last 100,000 years, the human population dwindled to a very low level.

It was out of this small population, with its consequent limited genetic diversity, that today's humans descended.

Estimates of how small the human population became vary but 2,000 is the figure suggested in the latest research.

If this is the case, humanity came very close to extinction.

I've found a few sources on the subject that discuss the hypothesis.

The first is by Hawks et. al.. On the second page,

A 2-Myr Bottleneck There are many reasons to believe that there may have been a number of severe population size bottlenecks on the lineage leading to living humans, principally because of the many speciation events that must have occurred. The diversity of the Pliocene hominid fossil record, beginning with the large samples from Aramis and Kanapoi 4.0–4.4 MYA (White, Suwa, and Asfaw 1994; Leakey 1995; Leakey et al. 1998), indicates that ours is just the most recent of a wide array of hominid species that once existed. The demographic effects of such speciations can be expected to have been intense, probably involving significant founder effects due to small population sizes, and they eradicated evidence of earlier speciations, such as the chimpanzee-hominid divergence. In turn, we expect that any genetic evidence of these early hominid speciations would have been covered up by the most recent significant bottleneck. We believe this bottleneck could have been the speciation event at the beginning of the lineage leading to living human populations.

A paragraph in the conclusion puts it (in my opinion) a little better:

All the currently available genetic, paleontological, and archaeological data are consistent with a bottleneck in our lineage more or less at about 2 MYA. At the moment, genetic data cannot disprove a simple model of exponential population growth following such a bottleneck and extending through the Pleistocene. Archaeological and paleontological data indicate that this model is too oversimplified to be an accurate reflection of detailed population history, and therefore we conclude that genetic data lack the resolution to validly reflect many details of Pleistocene human population change.

However, the next sentence is a bit different:

However, there is one detail these data are sufficient to address. Both genetic and anthropological data are incompatible with the hypothesis of a recent population size bottleneck. Such an event would be expected to leave a significant mark across numerous genetic loci and observable anatomical traits.

This site efficiently summarizes a paper by Stanley Ambrose (which Dikran Marsupial was discussing). Here is the concluding paragraph:

Ambrose concludes that bottlenecks occurred among genetically isolated human populations because of a six-year long volcanic winter and subsequent hyper-cold millennium after the cataclysmic super-eruption of Toba. This volcanic winter played a role in recent human differentiation. The resultant combination of founder effects and genetic drift may account for low human genetic diversity as well as population differences associated with so-called races. The bottleneck hypothesis offers an explanation for why humans exhibit so little genetic variation, yet superficially appear diverse. It also affords an explanation for the apparent recent coalescence of mtDNA and African origins.

In summary: an eruption by the Toba volcano led to a volcanic winter, leading to bottlenecks in humans in many areas. The lack of genetic variation in humans today is evidence of such a bottleneck at some point in time.

NPR has a slightly less dull take on the issue. Here's a short excerpt:

Once upon a time, says Sam [Kean], around 70,000 B.C., a volcano called Toba, on Sumatra, in Indonesia went off, blowing roughly 650 miles of vaporized rock into the air. It is the largest volcanic eruption we know of, dwarfing everything else...

That eruption dropped roughly six centimeters of ash — the layer can still be seen on land — over all of South Asia, the Indian Ocean, the Arabian and South China Sea. According to the Volcanic Explosivity Index, the Toba eruption scored an "8", which translates to "mega-colossal" — that's two orders of magnitude greater than the largest volcanic eruption in historic times at Mount Tambora in Indonesia, which caused the 1816 "Year Without a Summer" in the northern hemisphere.

Why did this hurt humans? The ash and clouds hurt ecosystems around the world, making less food for humans:

With so much ash, dust and vapor in the air, Sam Kean says it's a safe guess that Toba "dimmed the sun for six years, disrupted seasonal rains, choked off streams and scattered whole cubic miles of hot ash (imagine wading through a giant ashtray) across acres and acres of plants." Berries, fruits, trees, African game became scarce; early humans, living in East Africa just across the Indian Ocean from Mount Toba, probably starved, or at least, he says, "It's not hard to imagine the population plummeting."

Not the answer you're looking for? Browse other questions tagged history extinction-event .

12
Did the Ottoman sultans kill their own brothers?
11
Was Francis Crick high on LSD when he discovered the structure of DNA?
23
Are Adolf Hitler's DNA samples available?
13
Have leap days confused the calculated date for the "end of the Mayan calendar"?
23
Was Kursk sunk by USS Memphis?
26
Would humans starve if spiders disappeared?
6
Are Ashkenazi Jews genetically more European than Semitic?
16
Have Jews been kicked out of countries 109 times?