Is standing near Lake Karachay for an hour fatal?

I read this 9gag post (Okay, 9gag isn't really reliable for facts), where it says : 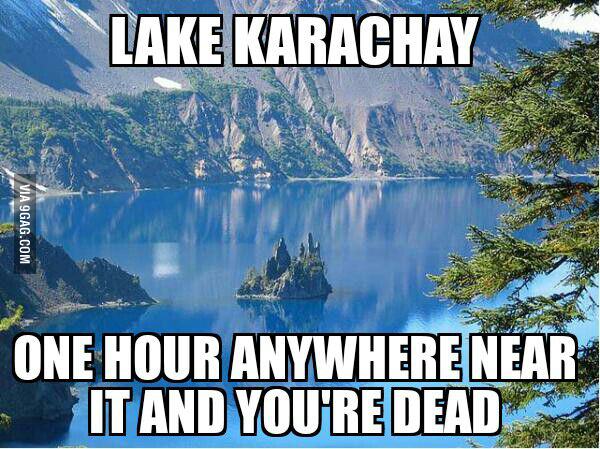 I then checked it at Wikipedia (Again, not the most reliable, really, but it does the job when necessary), and found out that it became a "dump site" for radioactive material.

Is it true that you would die by being near the lake for an hour, or any other short amount of time?

ONE HOUR ANYWHERE NEAR IT AND YOU'RE DEAD

This claim is probably too broad and the information is outdated, but the general idea is correct. A quick search revealed a few relevant details:

According to the Natural Resources Defense Council, the lake is so polluted that its waters will kill a human within an hour.

From Basement Geographer (which is referencing a broken link):

Also, from the Wikipedia article

According to Basement Geographer, the last reactor in the area closed in 1990, so the radiation will only have gone down since then. Also, I didn't see any information as to the radiation levels any place other than where the radioactive waste enters the lake. As such, I don't know what the current levels of radiation are at various places around and in the lake.

Something else to consider is how good water is at stopping radiation. According to the XKCD What-If blog,

For the kinds of radiation coming off spent nuclear fuel, every 7 centimeters of water cuts the amount of radiation in half.

So other than going to Lake Karachay with a geiger counter, we can't know for sure whether or not there are areas where the radiation levels are safe. There is a lot of radioactive material there, so it is almost certain that there are parts of the lake or the area around it where you could receive a lethal dose of radiation within hours.

In any case, the lake in the picture looks like a fine place to visit - the healthy trees, the size of the lake, and the island (see Basement Geographer for satellite image of the lake) make it obvious that that isn't a picture of Lake Karachay. It is actually Phantom Ship, an island in Crater Lake, Oregon, USA. [Hat tip: @ChrisW]. This photo of the lake appears to be the original (or at least derived from the same source): 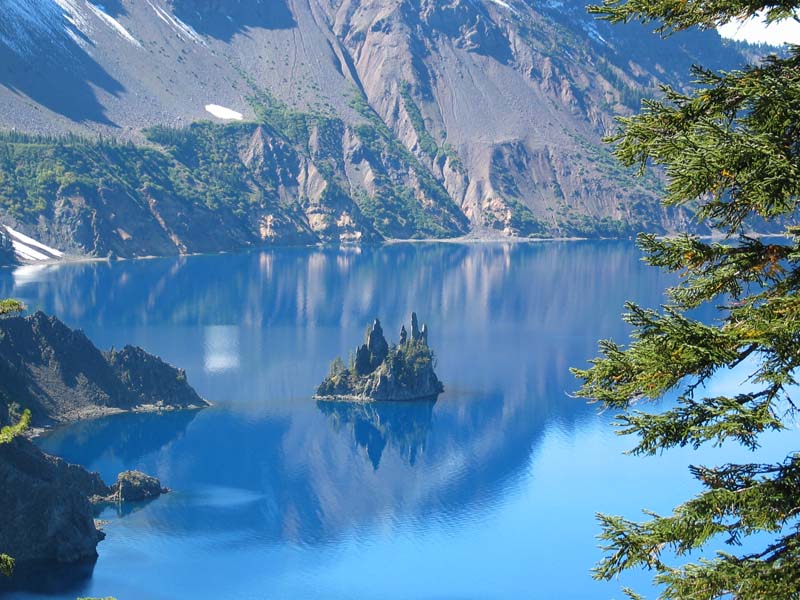 On page 10 of this PDF (which has "page 519" printed in the header of the page), which is on the Natural Resources Defense Council web site, it confirms 600 roentgens per hour (death in one hour), citing a (presumably Russian) document titled Practical rehabilitation of territories contaminated as a result of implementation of nuclear material production defense.

That's at a specific place (where the effluent is discharged into the lake).

The next page says they that were covering the lake with concrete and emptying it of water in 1991, and expecting to finish doing that by 1995.

However Overview of Dose Assessment Developments and the Health of Riverside Residents Close to the “Mayak” PA Facilities, Russia, which is dated 2009, says,

Plans exist to fill in and cap R9 [i.e. Lake Karachay] with hollow concrete blocks, gravel, and soil and clay layers in an effort to stabilise the site and stop the groundwater contamination plume. Only partial infilling is believed to have occurred to date.

Given how much the dose varied at its peak I expect that even "partial infilling" will have made an orders-of-magnitude difference to the 'peak' exposure levels.

4
Is this Halloween campaign from Pepsi and Coca Cola real?

11
Does living near a nuclear power plant cause cancer?
30
Is using a standing desk for several hours healthier than sitting at a desk all day?
26
Is eating boogers good for you?
20
Are suicide attempts via wrist cutting likely fatal?
13
Do Jet Skis produce in an hour equivalent pollution to 100,000km of a new/small car?
23
Did Hedviga Golik sit dead and undiscovered for 42 years in front of her TV?
18
Does breathing Beijing's air for one hour reduce life expectancy by 20 minutes?
2
Are black cabs responsible for nearly a fifth of central London's road transport Nitrogen Oxide emissions?
11
Is the European NO₂ limit of 40 µg/m³ for outside air backed by strong evidence?