How long did the crew of the Space Shuttle Challenger survive?

I came across this Snopes page recently, which presents the claim that the astronauts aboard the Space Shuttle Challenger survived until the crew compartment hit the water, and then debunks it.

If the cabin depressurized immediately, the crew would have lived about 6 to 15 seconds after the blast; if not, they might have survived for the full two minutes and forty-five seconds it took the cabin to fall 65,000 feet back to Earth. They most certainly could not have lived through the crushing 207 mph impact with the waters off the Florida coast, which negates the wilder versions of "survived astronauts" rumors that had them still alive for hours (and even days) under the sea, waiting for rescuers who could not reach them in time.

While the arguments presented against the claim sound fairly good (especially considering that the "tape" was from a tabloid), I'd like some more assessments. How long did the astronauts stay alive? Were some alive when the crew compartment hit the water?

The structural evaluation established clearly that the crew module, including most of its outer shell, remained essentially intact until impact with the water and that the module was fragmented extensively from extreme overload and inertial forces associated with water impact. The structural deformations and fragmentations indicate that the module struck the water in a slight nose down and steep left bank attitude.

Additionally, there is evidence that 3 crew members activated their personal egress air pack (PEAP) indicating that there was a period of consciousness post-incident:

The separation of the crew compartment deprived the crew of Orbiter-supplied oxygen, except for a few seconds supply in the lines. Each crew member's helmet was also connected to a personal egress air pack (PEAP) containing an emergency supply of breathing air (not oxygen) for ground egress emergencies, which must be manually activated to be available. Four PEAP's were recovered, and there is evidence that three had been activated.
source

An estimate of the length of time for the crew module to hit the water after the incident is therefore the best estimate of how long they survived.

Several large objects were tracked by radar after the shuttle disintegrated. One such object, classified as "Object D," hit the water 207 seconds after launch about 18 nautical miles east of launch pad 39B. This apparently was the crew cabin
source

There is a haunting image included in the report, the lower of the 3 arrows indicating the intact crew compartment separating from the left wing (top arrow) and main engine (center arrow) 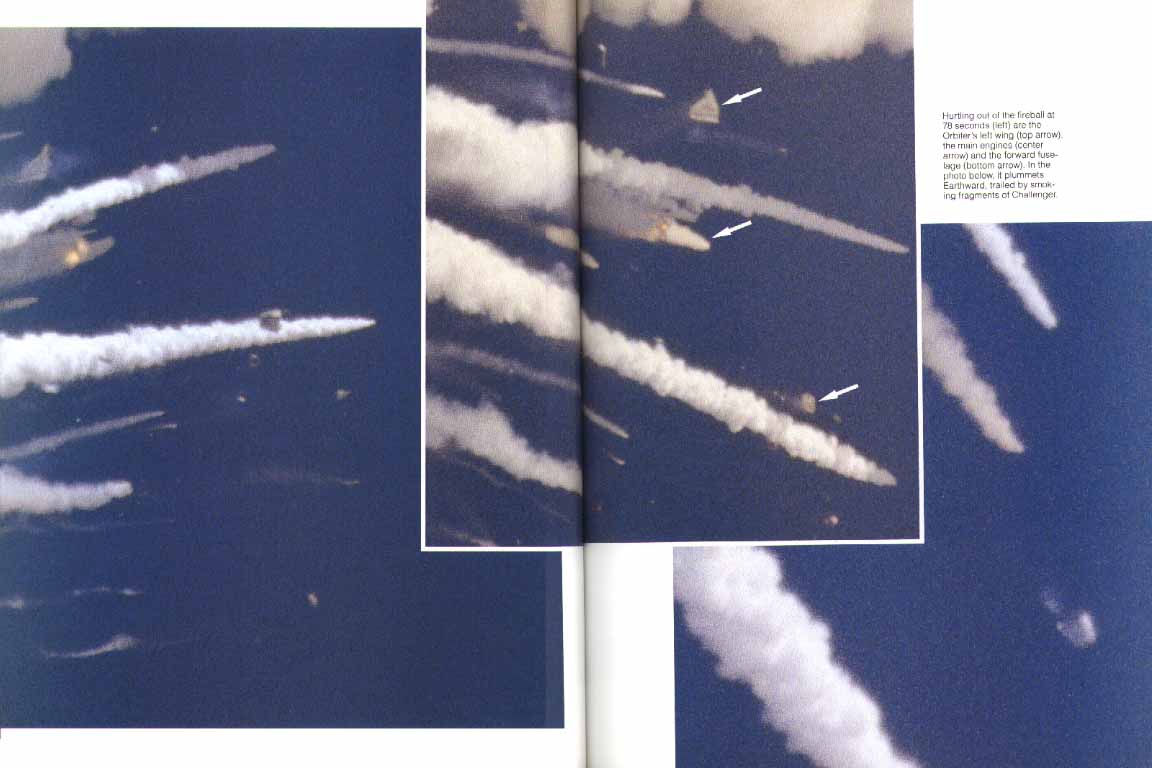 They might well have been (even "probably were") alive until impact with the ocean, but it's unknowable whether they were conscious.

Here is a NASA letter whose purpose is to summarize what's known about the deaths of the astronauts.

It's written by "Joseph P. Kerwin" (an astronaut/physician, M.D.). It says (I quote extracts from it below),

The findings are inconclusive.

Medical analysis indicates that these accelerations are survivable, and that the probability of major injury to crew members is low.

The separation of the crew compartment deprived the crew of Orbiter-supplied oxygen, except for a few seconds supply in the lines. Each crew member's helmet was also connected to a personal egress air pack (PEAP) containing an emergency supply of breathing air (not oxygen) for ground egress emergencies, which must be manually activated to be available. Four PEAP's were recovered, and there is evidence that three had been activated.

It is possible, but not certain, that the crew lost consciousness due to an in-flight loss of crew module pressure. Data to support this is:

Impact damage was so severe that no positive evidence for or against in-flight pressure loss could be found.

As for exactly how they they might have survived, the letter also says,

There are uncertainties in our analysis; the actual breakup is not visible on photographs because the Orbiter was hidden by the gaseous cloud surrounding the external tank. The range of most probable maximum accelerations is from 12 to 20 G's in the vertical axis. These accelerations were quite brief. In two seconds, they were below four G's; in less than ten seconds, the crew compartment was essentially in free fall. Medical analysis indicates that these accelerations are survivable, and that the probability of major injury to crew members is low.

After vehicle breakup, the crew compartment continued its upward trajectory, peaking at an altitude of 65,000 feet approximately 25 seconds after breakup. It then descended striking the ocean surface about two minutes and forty-five seconds after breakup at a velocity of about 207 miles per hour. The forces imposed by this impact approximated 200 G's, far in excess of the structural limits of the crew compartment or crew survivability levels.

Contrary to what Snopes says, it says that if the cabin depressurized the crew would have "rapid loss of consciousness and it would not have been regained before water impact"; whereas Snopes says they would have died.

In summary I suspect they lived for 2 minutes and 45 seconds after the break-up, were killed on impact with the ocean, and may or may not have been conscious during the free fall.

Not the answer you're looking for? Browse other questions tagged nasa forensics .

19
Did pills from China seized in South Korea contain the powdered flesh of dead babies?
171
Did NASA invest a million dollars in the research of a space pen, when the USSR simply used a pencil?
25
Did Neil Armstrong find aliens on the moon?
4
Did the Curiosity Rover take its own hands-free selfie?
36
Were the Space Shuttle's computers incapable of handling end-of-year roll-overs?
20
Did astronauts leave footprints on the moon?
26
Did NASA receive a tax refund on a diamond window when it left the Earth aboard a space probe?
19
Did NASA refuse to pay a $400 fine for littering caused by the deorbiting of Skylab?
1
Did NASA use CGI for the Apollo mission trainers?