Is this Halloween campaign from Pepsi and Coca Cola real?

For 2013's Halloween, there's an ad on the internet about a Pepsi can with a Coke costume, stating it's “scary”, to which Coca Cola responds with “Everybody wants to be a hero”. 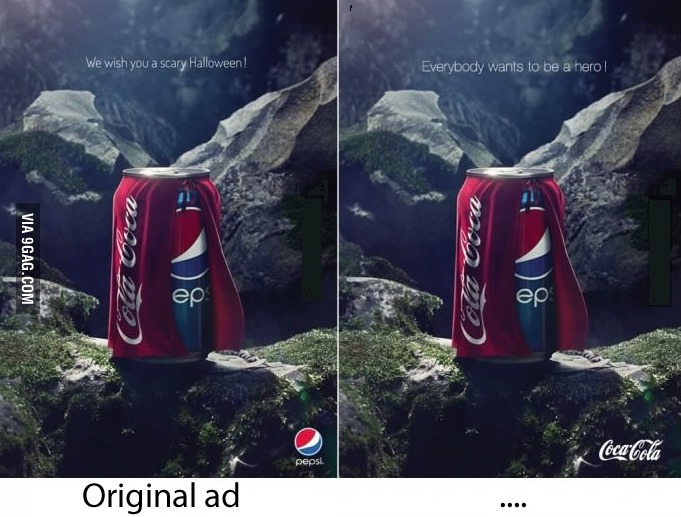 So far, so good, but the only reference I have been able to find is both images side by side, with a “via 9GAG.com” legend on the side.

Considering that 9GAG is not a reliable source and anybody can upload images there, I'm skeptical about these ads. Are they real? Did Coca Cola really respond in such a way to Pepsi?

The first one is apparently real.

This site and this site claim it's from a specific (Belgian) ad agency.

The first image doesn't have the 9GAG logo; and "Coca Cola" is mispelled.

That ad agency currently features a different Pepsi ad (showing that the agency has Pepsi as a client).

Not the answer you're looking for? Browse other questions tagged consumer-products .

20
Is standing near Lake Karachay for an hour fatal?

19
Is the Coca-Cola recipe a secret?
15
Is Coca-Cola effective at removing blood-stains?
31
Is this "Remove child before washing" clothes label real?
9
Does Coca Cola taste different in glass bottles?