Are men raped at a higher rate than women, after considering prison rape?

I've seen a number of articles claiming that contrary to what one might expect, American men are raped more often than women when one takes in to account prison rape. Is this accurate?

More men are raped in the U.S. than woman, according to figures that include sexual abuse in prisons.

In 2008, it was estimated 216,000 inmates were sexually assaulted while serving time, according to the Department of Justice figures.

That is compared to 90,479 rape cases outside of prison.

The Daily Mail article actually did a good job of providing a source of the "The Shame of Our Prisons: New Evidence" from the New York Review of books which provided a good jumping off point. Doing a fair one to one comparison for this can be tough due to reporting rates, namely that it is under reported. In this case though, the Bureau of Justice Statistics published the "Sexual Victimization in Prisons and Jails Reported by Inmates, 2011–12" report that summarized the findings as follows:

Note that the report does not distinguish between male and female for the 97,177 adult prison and jail figure, but it does provide the following detailed breakdown, 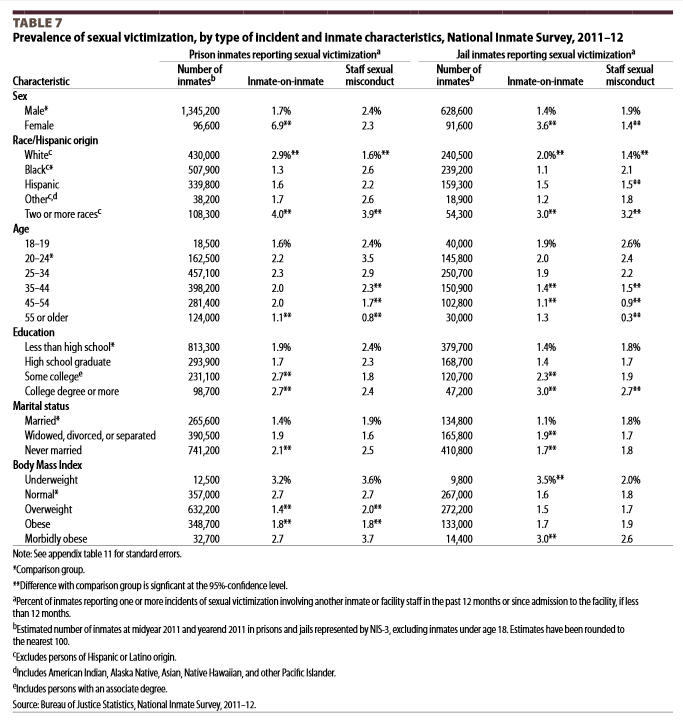 For the same year, the FBI Crime in the United States 2012 report for forcible rape that,

where forcible rape is defined as,

Forcible rape, as defined in the FBI’s Uniform Crime Reporting (UCR) Program, is the carnal knowledge of a female forcibly and against her will. Attempts or assaults to commit rape by force or threat of force are also included; however, statutory rape (without force) and other sex offenses are excluded.

Which implies that on a basic level that the reported rate of forcible rapes against females is slightly higher than the aggregate 80,600 estimate for prison and jail populations across males and females. However, since the FBI data is limited to females we are going to need to look for a more inclusive source of data. 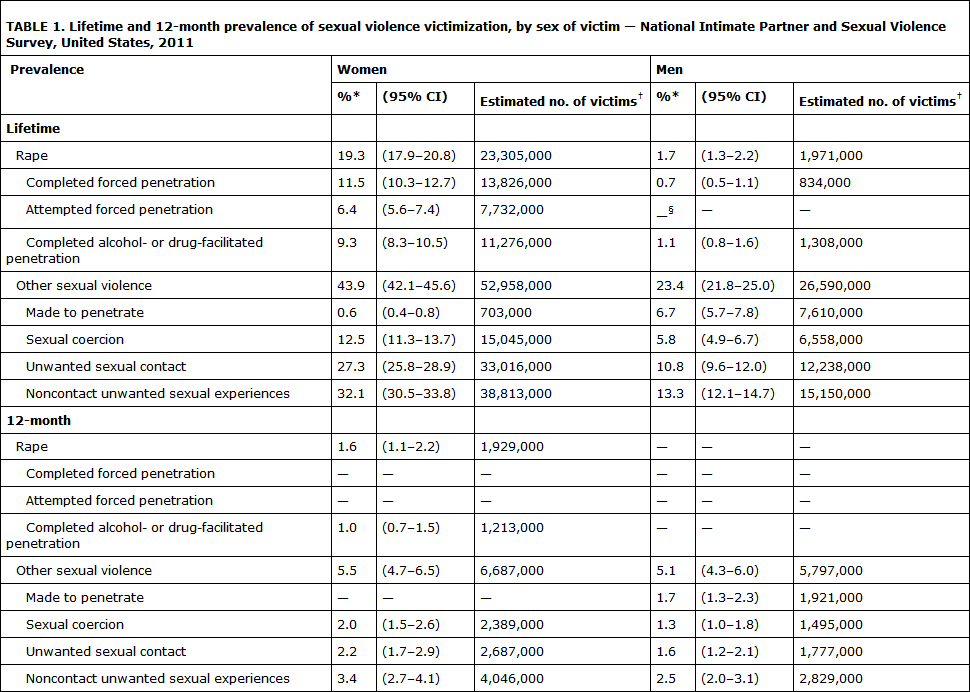 This is where it is important to note the methodology for the NISVS from their PDF report,

The National Intimate Partner and Sexual Violence Survey is a national random digit-dial telephone survey of non-institutionalized English- and/or Spanish-speaking U.S. population aged 18 or older. NISVS uses a dual-frame sampling strategy that includes both landlines and cell phones. The survey was conducted in 50 states and the District of Columbia and was administered from January 22, 2010 through December 31, 2010. In 2010, a total of 18,049 interviews were conducted (9,970 women and 8,079 men) in the U.S. general population. This includes 16,507 completed and 1,542 partially completed interviews. A total of 9,086 females and 7,421 males completed the survey. Approximately 45.2% of interviews were conducted by landline telephone and 54.8% of interviews were conducted using a respondent’s cell phone. The sexual orientation of the sample included 96.5% females identied as heterosexual, 2.2% bisexual, and 1.3% lesbian. For males, 96.8% identied as heterosexual, 1.2% bisexual, and 2.0% gay.

Thus it should be noted that incarcerated persons would not have been included in the NISVS data and I didn't see anything that indicated former incarceration status of the persons surveyed so that can not be taken into account either. However, given the basic summary findings of the NISVS,

An estimated 1.7% of men (or almost 2.0 million men) were raped during their lifetimes; 0.7% of men experienced completed forced penetration. The case count for men reporting rape in the preceding 12 months was too small to produce a statistically reliable prevalence estimate.

However, it should be noted that there are limitations associated with the NISVS data,

The findings of this report are subject to at least five limitations. First, the overall response rate for the 2011 NISVS survey was relatively low (33.1%). However, the cooperation rate was high (83.5%), and multiple efforts were made to reduce the likelihood of nonresponse and noncoverage bias. These included a nonresponse follow-up in which randomly selected nonresponders were contacted again and offered an increased incentive for participation as well as the inclusion of a cellular telephone sample. Second, although NISVS captures a broad range of self-reported victimization experiences, it is likely that the estimates presented underestimate the prevalence of sexual violence, stalking, and intimate partner violence (18). Victims who are involved in violent relationships or who have recently experienced severe forms of violence might be less likely to participate in surveys or might not be willing to disclose their experiences because of unresolved emotional trauma or concern for their safety, among other reasons. Third, a telephone survey might be less likely to capture some populations that could be at higher risk for victimization (e.g., persons living in nursing homes, military bases, prisons, or shelters, or those who are homeless). Fourth, self-reported data are vulnerable to recall bias because respondents might believe that events occurred closer in time than they did in actuality (i.e., telescoping), and this type of bias might particularly affect 12-month prevalence estimates. Finally, follow-up questions were designed to reflect the victim's experience with each perpetrator across the victim's lifetime and there were limitations associated with how these questions were asked. Respondents were asked about the impact from any of the violence inflicted by each perpetrator. Therefore, the impact of specific intimate partner violence behaviors cannot be assessed. Also, because victims' reports of the age and relationship at the time any violence began with each perpetrator were used, it was not always possible to assess the age or relationship at the time specific types of intimate partner violence occurred.

Although based upon review other reports associated with the Wikipedia survey on the topic it appears that these limitations likely apply to all mass surveys of this topic.

On the assumption that most rapes go unreported as indicated by the NISVS data I find it to be implausible that even with BJS prison statistics that the rate of rapes of males would be higher than for females. One thing to note though is that the BJS information seems to indicate that most victims in prison are repeatably raped while the NISVS data seems to indicate singular reports so that might be a distinction that would need further investigation.

Not the answer you're looking for? Browse other questions tagged united-states gender sexual-abuse violence .