Are "burglar codes" used to target homes for crime?

There is a common trope which has been going round for years that there are a series of chalk-marks used by burglars to indicate possible targets.

There have been multiple news stories about this over the years, which I believe make this notable

The questions is, has there ever been a verified case of a burglar admitting to the use of these codes? Either in actually marking the location of a property themselves, or seeing the code already marked and using that information to choose the target of a burglary?

Many news stories quote the "Surrey Police" in the UK. But even a search on their website brings back nothing significant.

This is not actually an answer to the question you asked. However, I hope you'll find it useful anyway, since it's quite hard to prove a negative.

According to this BBC News article "Da Pinchi codes' not for burglars, say police," the chalk signs referenced in the articles you linked to are used for innocent purposes. The source seems to be this "South Worcestershire Cops" Facebook post*, which says that the symbols are used by utility companies, and has a helpful (if unfortunately low-resolution) picture: 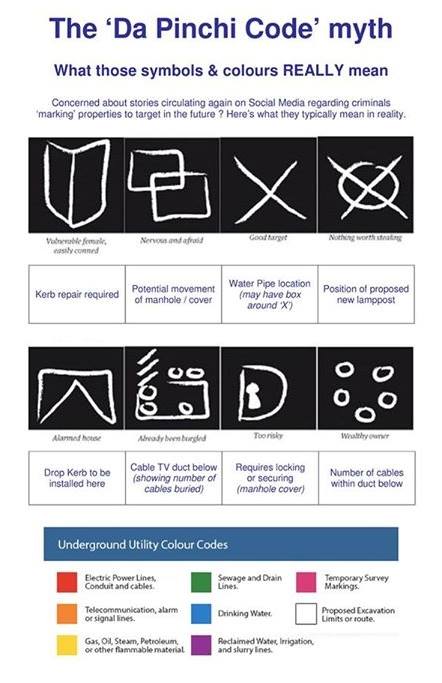 Another linked BBC News article, "What do those squiggles on the pavement actually mean?," has some more examples of utility road markings. It confirms the water pipe symbol (an "X") and the lamp-post symbol (a circle with an "X" in it), and describes similar symbols for cables. Unfortunately, I haven't found any independent confirmation of the meaning of the "kerb repair required," "potential movement of manhole/cover," and "drop kerb to be installed here" signs.

There is also a relevant Snopes article, "Grab and Go Code Chalkers", which gives the verdict "Unproven".

Other news sources that covered this story:

Some comments that appeared beneath the question that I thought were particularly relevant or interesting:

loosly translating from this Swedish article "Pär Cederholm (local police chief) also tells us that he has seen gang marking apartments that they then break into. "

and here a Swedish insurance company says that "It may happen that they mark the places where they find something interesting." in relation the motor boat motors theft.

Is this good proof ? to me it looks more anecdotal, and many times it strongly suffers from confirmation biased.

My neighbors (true story) saw a small pile of stones in their yard, others saw a stone lying under the car's wheel, they removed it and whala nothing was stolen.

2
Does the "chalk code" exist?

51
There isn't "a single case - not one - in which it is clear that a person was executed for a crime he did not commit.”
69
Are black Americans responsible for more than 50% of homicides?
108
Are crime rates up by 10% in Germany?
12
Did the Houston Police Department intentionally target the house on Harding Street?
12
Does USA imprison people of color at a higher rate than whites for the same crime convictions?