Does a pair of trainers (shoes) hanging on a telephone wire mean the house nearby is a crack den?

I've been told this many times (in the UK). It's even mentioned in a wikipedia article: 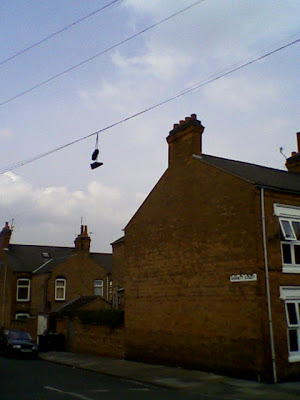 Is there any evidence that this is true? It seems to be a bit of an urban myth to me. The reference in the wikipedia article is a little....weak.

Snopes.com includes it as a legend and includes a large number of other possible reasons with the most likely one is that most people do it because they think it looks cool.

All across the United States, you'll encounter discarded shoes hanging from wires, poles, and trees. Theories as to what these shoes signify abound, but, contrary to what one hears, there's no one right answer.

It's possible that some drug users might use it as a signal, but if so, they're going to be largely lost in the noise.

Shoes (probably not those ones, specifically) mark a gang's turf. This practice is in decline, however gangs selling drugs, is not. Source, living in Chicago.

"It might appear to be a juvenile prank, but it's not," said Matt Smith, spokesman for the Chicago Department of Streets and Sanitation. "My experience is that it's somehow announcing the availability of drugs, not something we think should be out there."

Smith said his department works with the Chicago police to take down the shoes, acting on complaints referred from the city's 311 help and information line.

The city had 1,200 requests last year to remove gym shoes, balloons and other objects from wires, down from just over 3,000 in 2007, said Phillip Hampton, director of 311 services.

"We take those very seriously," Hampton said. "We enter the complaint, and we let the experts at Streets and Sanitation provide the follow-up."

Smith said the city tries to salvage part of the shoes, recycling them into the rubber strips that line public gardens.

"We haven't seen a lot of this," said Chicago Police spokeswoman Monique Bond. "It's something that has been seen in the past. It was termed 'old school.'"

A Chicago police source who worked in the gang unit for decades said the shoes can have different meanings depending on the neighborhood. A particular shoe might be a marker of drug sales, like a calling card or uniform.

"Graffiti identifies gang territory, spooks rivals, and communicates messages from one gang member to another and from one gang to another. Another method that gangs use to mark out their territory is by draping a pair of tennis shoes that have been tied together by their laces over telephone wires or high in tree limbs. This can be done by the gang to mark its territory or by a rival gang to show disrespect of another gang's turf. The brand of shoe or color of shoe lace will denote the gang which has 'thrown the shoes.'"

-Into The Abyss: A Personal Journey into the World of Street Gangs, by Mike Carlie, Ph.D.Copyright © 2002 Michael K. Carlie