Was there a large, illegal CIA project called "MKULTRA"?

Was there an illegal CIA project called MKULTRA, and if-so what did it involve and when did it end? Did it involve, as suggested in a quote from Ted Kennedy, a massive conspiracy involving dozens of universities and institutions to perform tests that would probably be considered illegal? From the Wikipedia article on MKULTRA:

On the Senate floor in 1977, Senator Ted Kennedy said:

The Deputy Director of the CIA revealed that over thirty universities and institutions were involved in an "extensive testing and experimentation" program which included covert drug tests on unwitting citizens "at all social levels, high and low, native Americans and foreign." Several of these tests involved the administration of LSD to "unwitting subjects in social situations." At least one death, that of Dr. Olson, resulted from these activities. The Agency itself acknowledged that these tests made little scientific sense. The agents doing the monitoring were not qualified scientific observers.

If this project did exist, were all of the documents "deliberately destroyed in 1973 by order of then CIA Director Richard Helms" as the article suggests?

The Kennedy quote you supplied is probably from a 1977 Congressional Joint Hearing before the Select Committee on Intelligence (and a couple other committees). There doesn't seem to have been any disagreement from the CIA witnesses at that hearing that MKULTRA had been a real program, that it was larger than previously thought, and that most of the records had been destroyed in 1973. You can read the entire hearing here. Here's the passage that most directly answers your question. 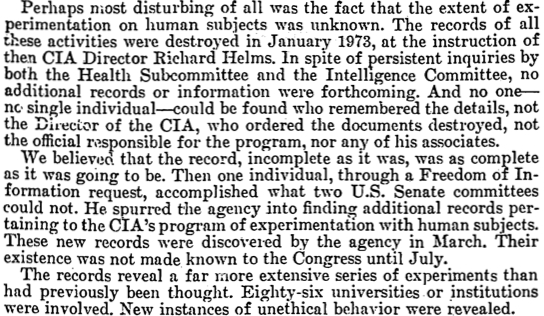 This is another quote from Ted Kennedy, but a few minutes later the then current director of the CIA, Adm. Stansfield Turner, verifies that Kennedy's account of the destruction is correct.

With no one disputing the essential facts given, I see no reason to assume they're aren't true. In this particular case there really was a conspiracy at the highest levels of the CIA to cover up uncomfortable truths.

Not the answer you're looking for? Browse other questions tagged government cia .

2
Was Timothy Leary affiliated with the CIA?

7
Was the term "conspiracy theorist" made popular by the CIA?
6
Did a former CIA accountant testify that Lee Harvey Oswald was a CIA employee?