Is there a correlation between voting for the Democratic Party and gun crimes in the USA?

The following image has been making the rounds on social media: 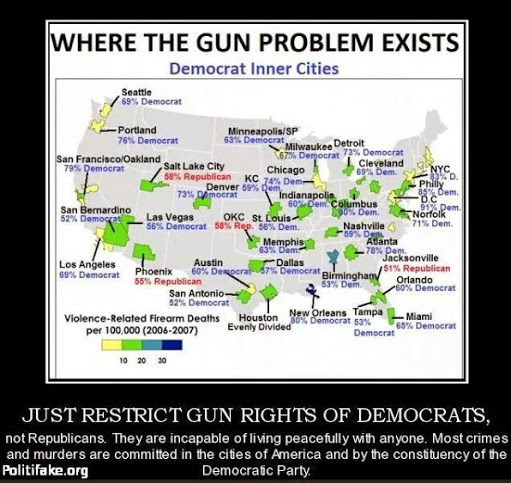 The info-graphic says there's a problem in "Democrat Inner Cities".

So the correlation is, "Cities (urban voters) are Democratic" and "Inner cities have (gun deaths) violence".

I don't think this is evidence that the (relatively very few) murderers themselves (less than 1% of the population) vote Democratic or Republican; so I don't see a connection between "voting Democratic" and "gun crime", except that both (voting and crime) happen in (all) cities.

First, the American firearm-deathrate according to this table is 10.1 per 100,000 people, but the yellow swatches in the Infographic are, according to the legend, areas that have less than that rate. Conversely, the entire states of Lousiana, Alabama, Mississippi, Wyoming, Montana... well, actually, 30 entire states ... should be colored in green (indicating above-average deathrates). Alaska, which has a statewide deathrate of 20.4 per 100,000, should be in pale blue.

The infographic may still be true, since it may be that the areas in the infographic are very violent places in an otherwise tranquil sea of peace and love, but the lowest-deathrate states (including the NY/NJ/CT tristate area and Massachusetts, despite the graphics highlighting them) are considered liberal / Democratic. So it doesn't seem all Democrats "are incapable of living peacefully with anyone".

Perhaps the creator of the Infographic was trying to create an argument, not so much about political affiliation, but some other characteristic. I wonder what characteristic a person spewing agitprop about "Democrat inner cities" could mean?

Not the answer you're looking for? Browse other questions tagged united-states politics guns .

8
Does a UN Treaty force gun control in the USA?
8
Did the Republican Party in the House of Representatives recently propose not a single job bill, but many morality and gun-related bills?
16
In the USA, do supporters of the Republican party make more charitable donations than supporters of the Democrats?
8
Are the voting figures correct in this image about historical US decisions by party?
14
Is there a positive correlation between number of sexual partners and likelihood of failed marriage in the United States?
18
Correlation between BSE/CJD and Brexit vote
15
Do Black Lives Matter donations get funneled to the Democratic Party?
6
Is there more police brutality in cities controlled by the Democratic party?