Were our ancestors taller than us

I read an article claiming that our ancestors were taller than us. their reasoning can be summarized as:

The smaller the planet, the lesser its gravity and the bigger and taller its creatures will be.

The earth was much smaller and it keeps expanding.

No, according to the fossil record, most past human species were similar heights or shorter than modern humans, research suggests that:

suggests that the height of the Homo genus remained more or less stable for 2 million years until the appearance of a "ground-breaking species in this sense" in Africa just 200,000 years ago. These were the Homo sapiens, who were initially significantly taller than any other species that existed at the time. 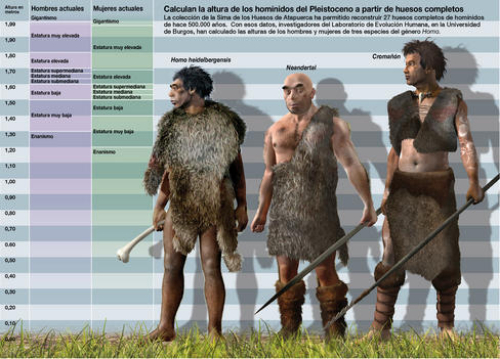 Image and quote source: Homo heidelbergensis was only slightly taller than the Neanderthal (2012)

A couple more examples are in the diagram below:

Most geneticists believe that the improvement in childhood nutrition has been the most important factor in allowing humans to increase so dramatically in stature.

But importantly, they state:

the trend toward increasing height has largely leveled off, suggesting that there is an upper limit to height beyond which our genes are not equipped to take us, regardless of environmental improvements.

As for the basis of this notion, the theory that the Earth was smaller in the past, explained in the answer here.

24
Was the Earth originally smaller and ocean-free?

19
Can a cat's purr heal injuries?
9
Do biopsies accelerate cancers?
13
Is the total cost of Sovaldi, the $1,000 pill, comparable to conventional long-term treatment?
17
Are most humans infected with parasites that water fasting can eliminate?
10
Does Honey Promote Tooth Decay or Prevent It?
12
Are sports drinks more effective at hydrating athletes than water?
2
Were the Skripals attacked by use of Novichok?
10
Does flu vaccine make us more vulnerable to COVID-19?
37
Are chemicals in plastic causing a significant reduction in fertility?