Did Abbott oppose Mandela, and play rugby in South Africa during apartheid?

#heyasio Some men fight for what is right, and achieve greatness. Others care only for themselves. 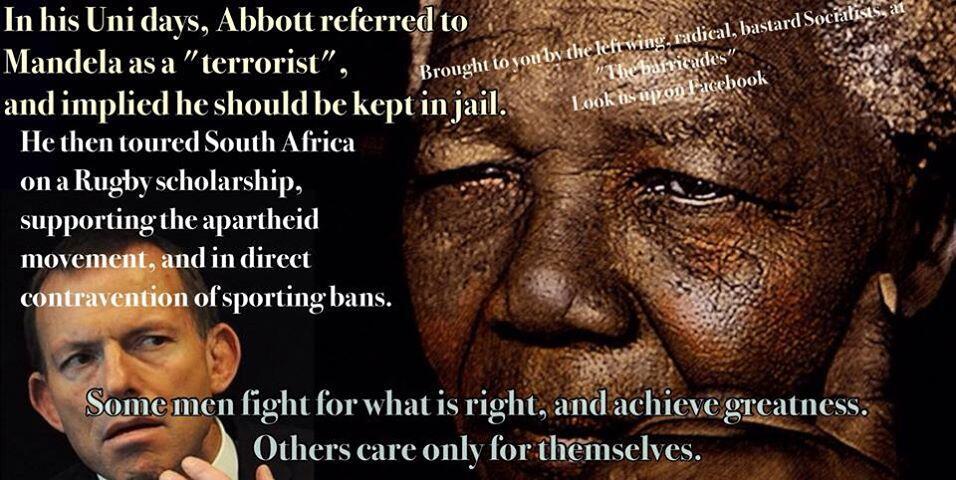 In his Uni days, Abbott referred to Mandela as a "terrorist", and implied he should be kept in jail. He then toured South Africa on a Rugby scholarship, supporting the apartheid movement, and in direct contravention of sporting bans.

Brought to you by the left wing, radical, bastard Socialists at "The barricades". Look us up on Facebook.

Some men fight for what is right, and achieve greatness. Others care only for themselves.

The claims are also stated in the blog post Callow or shallow?

When Abbott was President of the Students’ Representative Council at Sydney University, he wrote in Honi Soit that Voluntary Student Unionism “would finally stop all students being taxed so the SRC can fund groups such as International Socialists, South African Terrorists, the Spartacists, Lidcombe Health Workers Collective etc. which are quite irrelevant, not to say obnoxious, to student purposes.”

Anti-Apartheid activity was alive and well in Australia at this time. Many Australians supported fundraising efforts for the ANC, and participated in anti-Apartheid demonstrations throughout the 1960s and 1970s. The racially exclusive Springboks were banned from playing in Australia between 1974 and the end of Apartheid in 1994. In 1981, the Fraser government refused permission for the aircraft carrying the Springboks to a tour of New Zealand to refuel on Australian territory. Abbott, however, accepted a rugby scholarship to tour South Africa in what former Federal Labor Minister Barry Cohen described as a “universally acknowledged… promotional tour of Apartheid”.

Did Abbott refer to Mandela as a terrorist, and imply he should be kept in jail, and did he tour South Africa during sporting bans against apartheid South Africa?

I'm skeptical, because it sounds very similar to claims made about David Cameron.

17
Was David Cameron linked to "Hang Nelson Mandela" posters in the 1980s?