Did Colorado replace any 420 mile markers with a 419.99 mile marker to deter theft? 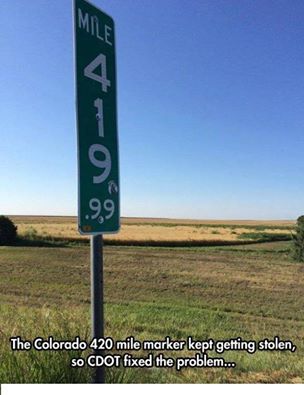 Although marijuana is now legal in Colorado, I don't see any particular attraction to mile markers from this state, as US mile markers are pretty standard--at least along interstate highways (where this photo appears to have been taken).

In any case, is there any truth to the claim that the* 420 mile marker has been a special target of theft? And if so, did the CDOT change the mile marker as claimed in the photo? I haven't done any in-depth investigation, but the low quality of the image makes it seem quite possible that it was doctored...

*The claim suggests that there is a single mile marker 420 in Colorado, which is clearly false, as, even if there is only a single (Interstate) highway long enough to have a mile 420, there would be one marker on each side of the road, one for east-bound traffic, one for west-bound.

In January 2014, NBC News did an interview with "Amy Ford, the communications director at the Colorado Department of Transportation":

Ford couldn’t say how many times the 420 sign had been lifted in its history but said, “It was stolen frequently enough that we decided to switch our tags.”

Newspaper journalists aren't always the most reliable of information sources, but a direct interview with someone who appears to have the appropriate expertise and authority is the best I would expect to find on this topic.

They also include a second (uncredited) picture of the sign suggesting it isn't a simple photoshopped meme, but an extant sign.

Not the answer you're looking for? Browse other questions tagged united-states theft .

7
Are manual transmission cars stolen less?
8
Did DUI fatalities increase or decrease due to legalization of marijuana?