Is Turmeric better than prozac to treat depression?

We can find online several websites promoting phytotherapy, which claim that Turmeric (Curcuma) is as effective as Prozac for treating depression, and without its side effects, for example this one,

Researchers with the Department of Pharmacology of Government Medical College in Bhavnagar, Gujarat, India compared the effects of turmeric and Prozac (fluoxetine), both used together and individually, in 60 patients diagnosed with major depressive disorder (MDD).

While reading the researchers conclusions indicates one treatment (turmeric) is equally effective as Prozac, it doesn’t account for the negative effects of Prozac, which boost turmeric’s value considerably.

The above article quotes this study, published in Phytotherapy Research revue.

Regardless of whether this particular study is reliable (unless this is the only study that's ever been conducted on this subject), is the claim true, that "Turmeric more Effective than Prozac at Treating Depression"?

I don't have access to the full article, but the most interesting part of the abstract (to me) is the scale used to measure depression.

The Hamilton Rating Scale for Depression used to be the standard test, and was created in 1960. This original test had 17 questions (aka HRSD-17 or HAM-D17), and is the version used by the study mentioned. Since then, there have been several revisions to the test, with lengths varying from 6 to 29 items (none of these later revisions were used).

It's important to note that while the test is supposed to rate how depressed you are (rather than if you're depressed), Hamilton omitted certain symptoms from the test. As a result, he was skeptical that the test could be used for clinical studies: 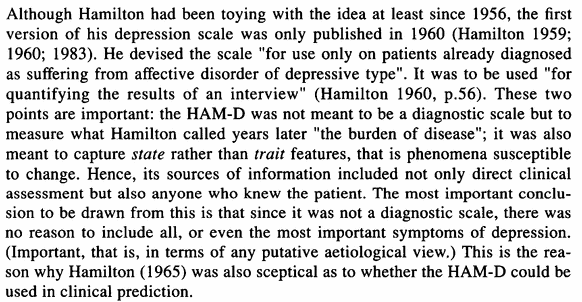 In recent years it has been criticized in several published papers, notably The Hamilton Depression Rating Scale: Has the Gold Standard Become a Lead Weight? A particularly pointed passage:

Evaluation of item response shows that many of the individual items are poorly designed and sum to generate a total score whose meaning is multidimensional and unclear.

So while I do believe that the results published in the study are accurate, it's hard to tell if they're meaningful.

Not the answer you're looking for? Browse other questions tagged medical-science alternative-medicine depression .

2
Can turmeric help you get better?

8
Is meditation a better analgesic than morphine?
17
Does having a pet help to cure your depression?
18
Is depression a disease?
9
Are Vitamin D pills toxic for humans in the long term?
7
Do vitamin D supplements help against winter depression?
6
How effective is electroshock therapy?
13
Is sex a cure for depression in 50 percent of cases?
7
Is depression caused by chemical imbalances?
5
Are gut bacteria a cause of depression?
8
Can gluten cause depression?