Do lemmings commit suicide by jumping off cliffs? 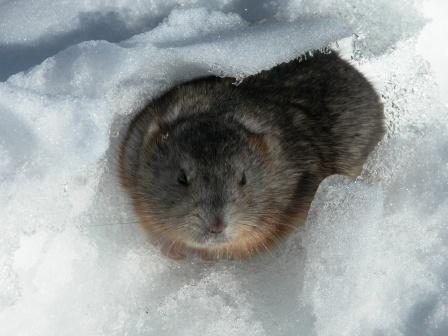 Lemmings have become widely known for their supposed tendency to run en masse off of cliffs to their deaths. The term "lemming" has even become a commonly used metaphor to describe the behavior of those who would mindlessly follow the crowd, despite the obvious consequences.

Is there any scientific evidence that mass lemming suicide is actually true?

If it isn't true, then what are the origins of the myth?

According to Snopes.com it is a myth, one promoted by the 1958 Disney film White Wilderness which not only staged a lemming migration on a turntable, but then herded them off a cliff. There was an article in the Washington Post about how nature movies are made a while back that said:

The lemmings that plunge to their deaths in the 1958 Disney documentary “White Wilderness” were hurled ingloriously to their doom by members of the crew, as a Canadian documentary revealed. Palmer writes that Marlin Perkins, host of television’s “Wild Kingdom,” was known to bait animals into combat [..]

Lemmings do migrate in response to population density and other pressures, and can swim, so there are times when some may drown trying to cross water, but they do not commit suicide. According to The Times, the myth was supported by sudden fluctuations in lemming populations, now believed to be caused by the predator-prey cycle.

Although the lemmings in the fabulous game from 1991 do, the real ones don't. You can see in this article by the Alaska department of fish and games that it is a myth that originate from the Walt Disney's "documentary" White Wilderness where some footage was faked to make it more spectacular.

Lemmings became the subject of a popular misconception that they commit mass suicide when they migrate. Actually, it is not a mass suicide but the result of their migratory behavior. Driven by strong biological urges, some species of lemmings may migrate in large groups when population density becomes too great. Lemmings can swim and may choose to cross a body of water in search of a new habitat. In such cases, many may drown if the body of water is so wide as to stretch their physical capability to the limit. This fact combined with the unexplained fluctuations in the population of Norwegian lemmings gave rise to the misconception. [8]

There is more on the article about how some of the mass suicides were staged.

56
Can cats survive a fall from any height?
21
Do animals commit suicide?

8
Can a skunk spray with its feet off the ground?
21
Do animals commit suicide?
17
Has the Gympie Gympie tree driven humans to commit suicide because of the pain from its sting?