Does everyone have a unique set of fingerprints? [duplicate]

Fingerprints are often used by law enforcement to identify individuals, even with a partial print. Are there any cases where people had the same fingerprints? Is there a limit to the number of unique fingerprints that can possibly exist?

In theory, no, but the odds for it happening are really low.

This presentation has a slide with an overview of the literature on the subject. If I'm interpreting the chart copied below, estimations of the possible configurations of fingerprints (i.e. the probability of a given fingerprint occurring) range from 1.45x10-11 to 1.20x10-80. Given that the number of people who have ever lived is estimated to be 100 billion to 115 billion (1.15x1011), then it's mathematically possible for every human who ever lived to have unique fingerprints. 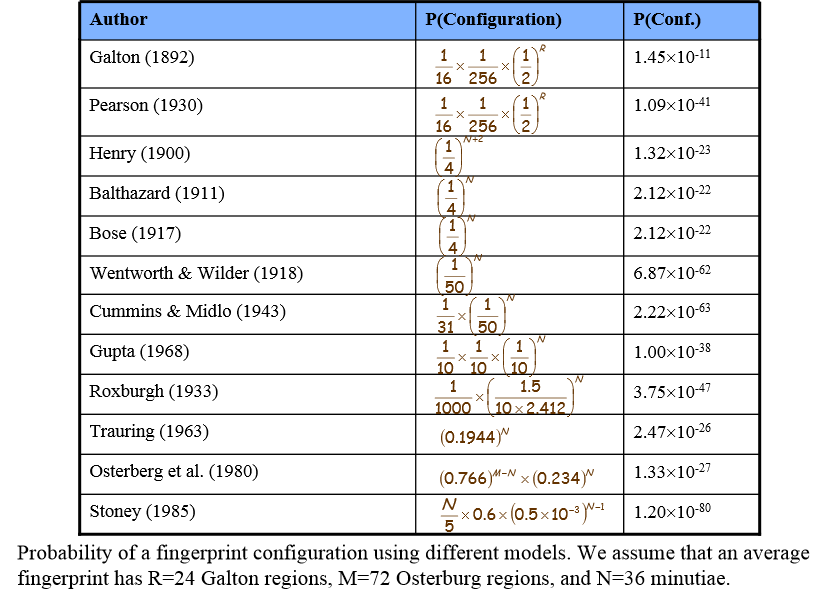 Since there's nothing which hands out fingerprints and ensures uniqueness, it's quite possible that there have been duplicates at some point. However, the odds for duplicates actually coming up in a real world scenario (i.e. two people living in the same country within the same general span of time, instead of anywhere in the world at any point in history) are infinitesimal.

Added to address comments: It's worth noting that all these probabilities are based on the granularity of the method involved. The Galton method, for instance, seems to involve dividing the finger up into 24 regions, and identifying the most prominent feature of that region. This leads to a fairly granular set of results, which, in turn, means that it's much easier to find someone else who would register as having the same set of fingerprints. This would be roughly equivalent to a version of the birthday problem where you're trying to find people who have the same birth month, instead of the same birthday.

Modern matching systems use the minutia of the fingerprint to provide a much more accurate match. My understanding of it is that there are 36 points selected based on finding certain features in a general area (i.e. five points of interest in this small section), and the precise relative location of each point to each other is what makes up the modern fingerprint record. This produces a far more accurate digital record of the fingerprint, although still not a 100% perfect one. Correspondingly, this makes the chances of finding two fingerprints considered to be a match much lower. To extend the previous analogy, you're now trying to find two people who share a birth minute, not just a birth day.

Not the answer you're looking for? Browse other questions tagged law-enforcement forensics .

38
How accurate are fingerprints at identifying somebody?

46
You have the right to one phone call when arrested - A Hollywood myth?
15
The CSI effect: Have television shows been shown to influence jury verdicts?
16
Police tip lines, are they huge source of false reports?
9
Have the USDA bullied (allegedly criminal) raisin-marketers?
12
Are SWATs in the US mostly used for serving marijuana warrants?
7
Do U.S. police (sheriff) departments earn money with drug busts?
6
Do Virgina and Connecticut have the death penalty for those who work on Sunday?
40
Did the city of Berlin set up safe zones for women for New Year’s Eve 2017/2018?