Are Americans more likely to be monolingual?

From a comment on English Language & Usage, also mentioned in Wikipedia, and Chad Fowler's book The Passionate Programmer (Related blog post by the author: How Learning a Second Language Changed My Life, where he describes it as a joke he heard in India, which used to be a British colony)

What do you call someone who speaks three languages? Trilingual.

What do you call someone who speaks two languages? Bilingual.

What do you call someone who speaks one language? American.

Are Americans more likely to be monolingual than people of other countries?

The joke doesn't provide a definition of what counts as "American", in terms of whether immigrants to the United States count as American, or the children of immigrants, or only people whose parents were themselves born in the United States.

At least in the case of Europe and the U.S., statistics do exist that directly answer this question. Those statistics simply aren't the ones from the censuses.

To be able to answer the question, a baseline measurement needs to be established. What does it mean to be multilingual/monolingual? How do you measure populations? Where does the data come from? Who is being compared in a "more likely" scenario? American to another Westerner, or to an average global citizen?

There are no reliable statistics to answer the question. So the only honest answer, unfortunately, is we don't know for sure.

That said, here are some points of reflection for those who want to explore the question from different angles. 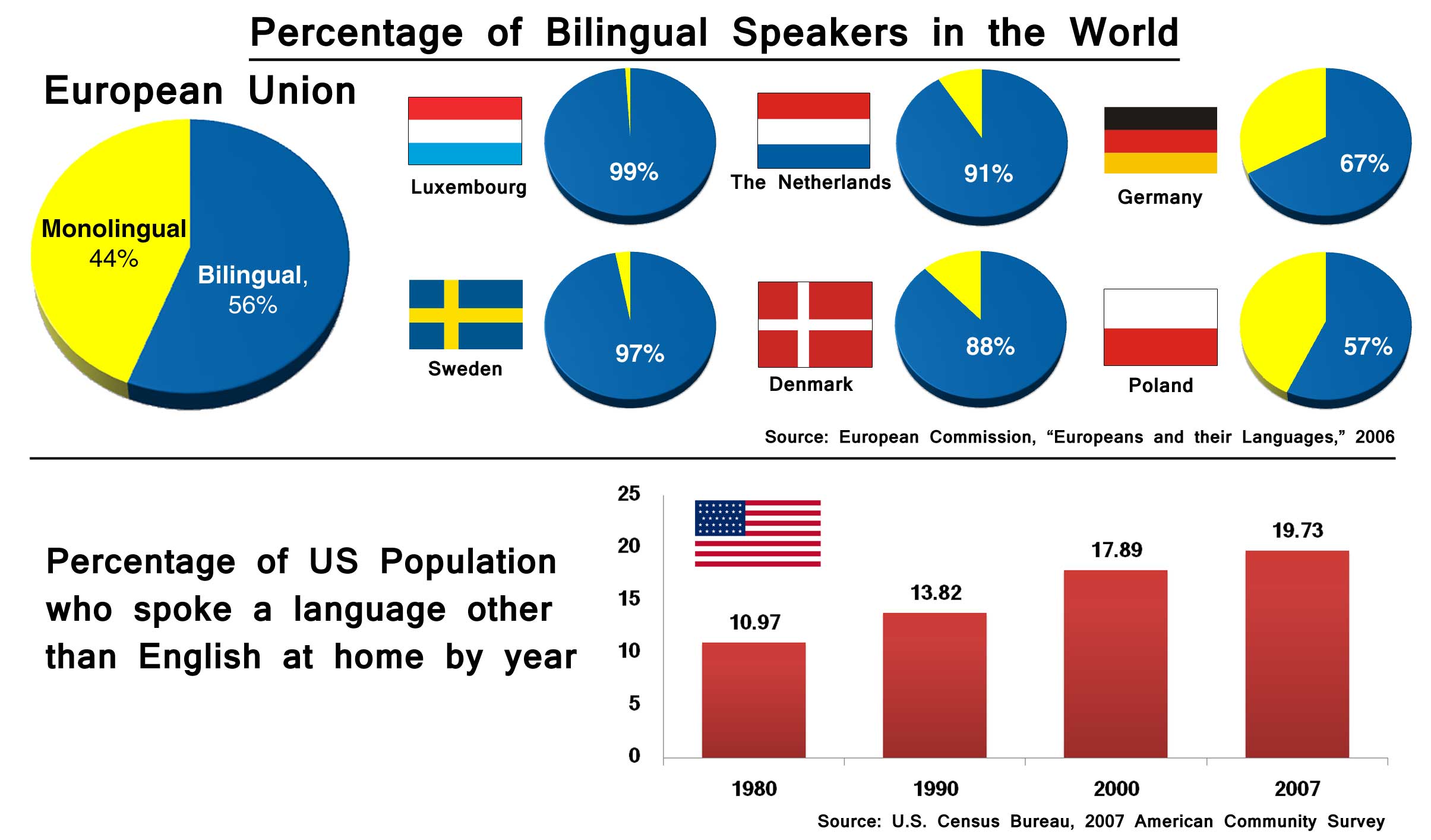 Viorica Marian Ph.D. and Anthony Shook compare US to EU bilingualism as part of a neurological study and created the graph comparison above. Based on statistics from the European Commission and the US Census, there is clearly a big gap, although there is also a distinction between speaking a language at home and having the skills to speak another language.

François Grosjean, Ph.D., Emeritus Professor of psycholinguistics at the University of Neuchâtel, Switzerland, reflects also on the challenge of counting bilinguals, including the definition.

I will present two examples of national censuses—the one in the United States and the one in Switzerland—and show how quite official data can sometimes produce very surprising results. In this instance, it would appear that there are proportionally more bilinguals in the United States than in Switzerland, even though the latter country is known the world over for the bi- or multilingualism of its inhabitants.

In short, this is because of the way questions are phrased (specifically related to German vs. Swiss German dialect).

The outcome was that Swiss Statistics stated that a mere 15.8 percent of the Swiss population is bi- or multilingual (less than the 20 percent found for the U.S.) when, in fact, most Swiss people know several languages that they use frequently.

In this piece, he also discusses the drivers and influencing factors in bilingualism. Asia as a general rule is pointed to as a place where multilingualism is a daily fact. Americans have less incentive/need to learn another language because English is the current global language of trade/commerce (as Greek and Latin have been in the past).

With these facts and the phrasing of the question "more likely", the answer nudges to "Yes, Americans are more monolingual", but Michael Erard writing for the NYT in 2012 believes that it's still a toss up.

Recently, the Stockholm University linguist Mikael Parkvall sought out data on global bilingualism and ran into problems. The reliable numbers that do exist cover only 15 percent of the world’s 190-odd countries, and less than one-third of the world’s population. In those countries, Mr. Parkvall calculated (in a study not yet published), the average number of languages spoken either natively or non-natively per person is 1.58. Piecing together the available data for the rest of the world as best he could, he estimated that 80 percent of people on the planet speak 1.69 languages — not high enough to conclude that the average person is bilingual.

Multilinguals may outnumber monolinguals, but it’s not clear by how much. The average American may be no more monolingual or less multilingual than any other average person elsewhere on the planet. At the very least, we can’t say for sure — not in any language. [emphasis added]

EDIT: Check out this Wolfram Alpha-generated overview of the spread of languages spoken in the USA at home. It has been noted by several that the home bias is a core weakness to the census data.

4
Can someone have a "gift for languages"?
24
Is atheism the fastest growing "religion" in the history of the United States?
20
Did Obama have a marine demoted for correcting him?
4
Did the United States' internment involve Japanese foreign nationals?
5
Is Melania Trump barely able to speak English?
8
Is "Calling your congressmen" in the US effective?
1
Does US American beer contain animal products?