Is the Heimlich maneuver the most appropriate response to choking?

The US National Institute of Health recommend (in some, limited circumstances) the use of the Heimlich maneuver as first aid for choking victims:

How to perform the Heimlich maneuver:

I used to be a First Aid volunteer in Australia, and was explicitly admonished not to ever use the Heimlich maneuver, as it was considered dangerous and not evidence-based. Other techniques were taught.

Is the Heimlich maneuver evidence-based for use as an appropriate first-aid technique for choking victims?

Dr. Richard M. Bradley, a member of the Red Cross' Preparedness, Health and Safety Services advisory council and an associate professor of emergency medicine at the University of Texas Medical School at Houston said:

To the best of my knowledge, after doing a pretty thorough literature search, no controlled studies exist comparing back blows to abdominal thrusts or anything else.

The inventor of the Heimlich maneuver, Henry Judah Heimlich, a thoracic surgeon, believes some of those lives could have been saved by his maneuver versus slapping someone on the back, he insisted:

However, it seems that Heimlich lacks evidence:

Heimlich and his spokespeople have regularly stated that "thousands of lives" have been saved by use of abdominal thrusting. However, they have produced no objectively collected, widely accepted data to support the claim. During the past year, the National Council Against Health Fraud has asked Heimlich several times for details on his allegedly successful cases, but he has produced nothing.

In addition, AUSTRALIAN RESUSCITATION COUNCIL published a paper in 2010 saying that there is not enough scientific evidence to support the use of abdominal thrusts and their use is not recommended in first aid. (2)

For years Henry Heimlich and his associates have promoted abdominal thrusts, the so-called Heimlich maneuver, as a first measure in the treatment of near-drowning. Despite a lack of data, studies, and physiological or medical sense ,abdominal thrusts have been advocated by Dr. Henry Heimlich, regularly, in multiple venues. Heimlich’s advocacy is based on his opinion, using arguments, described by reporter Pamela Mills-Senn, who wrote an extensive review on the matter, and quoted recently, as “circular, using his own pronouncements to validate his theories.”

William Terry Ray, director of the University of Cincinnati College of Nursing's Nurse Anesthesia program, looked at 40 years of research. The reviews concluded that a person may have to use the back blows as well as abdominal thrusts to relieve the obstruction, depending on what caused the person to choke.

No definitive study exists to support Heimlich's theory that slapping someone on the back can push an obstruction further down the throat. The literature on this is not conclusive either.

Studies cited in a review of research projects "used animals, cadavers and anecdotal evidence." But not living human subjects.

While the Absence of Evidence is not Evidence of Absence, I found that the Heimlich maneuver (see below):

Heimlich has also been at odds with the Red Cross over his claims that the maneuver could help drowning victims and someone suffering an asthma attack, surprisingly, later AHA warned against the use of the Heimlich maneuver for drowning rescue, and they said (4) :

There is no evidence that water acts as an obstructive foreign body. Maneuvers to relieve FBAO [Foreign Body Airway Obstructions] are not recommended for drowning victims because such maneuvers are not necessary and they can cause injury, vomiting and aspiration and delay CPR.

The AHA Guidelines were based on a series of referenced scientific articles.

In 2006, The Red Cross changed their recommendation, ending their promotion of Heimlich maneuver as the primary treatment for choking. They said:

Highlights of the skills changes, as a result of the new data, include: for CPR, students will now be instructed to perform cycles of 30 chest compressions and two breaths; and to aid a conscious choking victim, utilize a series of five back blows and five abdominal thrusts.

Moreover, life-threatening complications associated with use of abdominal thrusts have been reported in 32 case reports. (1)

For example: even when done correctly, Heimlich maneuver can injure the person on whom it is performed. Bruising to the abdomen is highly likely and more serious injuries can occur, including fracture of the xiphoid process or ribs. (3)

To keep this answer objective, I will not give a conclusion.

Scope: My answer comprises sources that support efficacy for the Heimlich Maneuver to alleviate choking, and sources that show a lack of evidence for a comparison with other methods. I consider only the risks and benefits in healthy individuals between the ages of 1 and 65 of the maneuver for Foreign Body Airway Obstruction (FBAO). I interpret 'most appropriate' as 'the method with highest patient survival rate'.

Out of scope: Drowning (which is not choking, and even Heimlich has retracted support there), infants, the elderly, the sick, Heimlich's son hating him, Heimlich's personal flaws and support of controversial AIDS cures.

Henry Heimlich named the maneuver (seen below) after himself, and has been a strong proponent of this invention, as well as of many other of his inventions, through his (again eponymous) Heimlich Institute. In a study performed by Heimlich and others investigating its efficacy he describes the intuitive reason it should work as follows:

Sudden elevation of the diaphragm compresses the lungs, which explosively forces air out through the trachea, ejecting the obstructing object 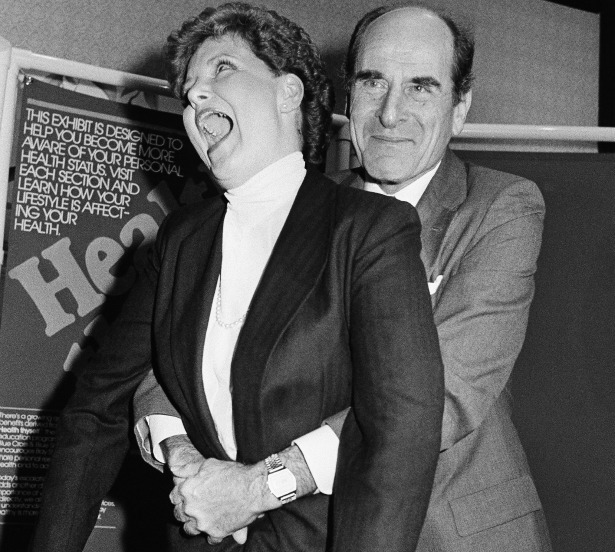 Informally, many people have been reported to have survived after having been administered the Heimlich maneuver. Some people reportedly still breathing after the technique include Ronald Reagan, Elizabeth Taylor and Goldie Hawn. Usually, these reports describe people choking on solid food items. Apart from the study below, I have found no non other scientific sources that showed statistics (other than Heimlich's own reports).

Foreign body airway obstruction represents a true emergency in adults, with a 3.3% mortality rate in the current study. The Heimlich maneuver was used frequently and with good success.

The US National Library of Medicine advocates using the technique after less dangerous methods have been exhausted. Their source for claiming so is Rosen's Emergency Medicine: Concepts and Clinical Practice. The maneuver is still taught in many classes.

The Red Cross certainly isn’t discounting the use of abdominal thrusts. But we include back blows, abdominal thrusts and chest compressions in our training because there is no clear scientific evidence to say that one technique is more effective than the others when treating a choking victim.

There are many complications associated with the Heimlich maneuver, some severe, which has led to many people detracting from the method. All sorts of things in the abdomen can rupture when under high pressure. Realize that it should be used as a final solution, with care, much like CPR (which can break ribs or kill victims, too), in the event that it is administered. Care should be taken, too, when forcibly slapping someone on the back when choking (which can also even lead to death).

After combing through 40 years of research, William Terry Ray, director of the University of Cincinnati College of Nursing's Nurse Anesthesia program, told the Enquirer that "there is no one definitive treatment to relieve an obstructed airway on a conscious person."

Heimlich himself at 96 did administer his eponymous technique to a woman in his retirement home with effective results, so he obviously still stands by his original claims.

7
Does raising your arm in the air help when you are coughing/choking on something?
1
Is there evidence from controlled trials that tracheostomy works?

46
Is breakfast the most important meal of the day?
42
Do we lose most of our body heat through our heads?
46
Has most peer-reviewed research on homeopathy given positive results?
8
Can we solve most blindness by cadaver donation?
33
In the USA, is AIDS most prevalent in the gay male population?
2
Do most patients with chronic fatigue syndrome have low thyroid activity?
3
Are most medical studies too badly designed to improve patient care?
59
Are most cases of polio derived from the polio vaccine?
10
Did a hypothermic, clinically dead boy revive in response to prayer defying “every expert, every case history, and every scientific prediction”?