Is Social Security headed for insolvency?

I can drag up a bunch of different articles either claiming that the US Social Security system is or is not headed for insolvency. The most recent reference to the concept was in a PBS interview with John Bogle:

I start off, simply put, with Social Security, which has to be changed in gradual, small ways to become solvent again.

Most of the interview is discussing investments and retirement planning so this little blip isn't terribly significant to the interview as a whole. But the concept keeps popping up over and over again and it can be hard to sift through the various political biases in play.

Yes, under the current rules and best available projections from US Federal government.

Social Security Administration's own projections from SSA's Office of the Chief Actuary:

If a trust fund’s balance fell to zero and current revenues were insufficient to cover the benefits specified in law, the Social Security Administration would no longer have legal authority to pay full benefits when they were due.

The full publication has methodology and the data tables. 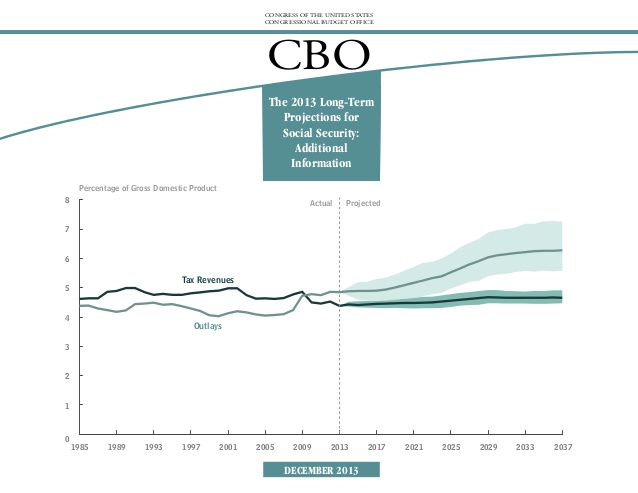 I plotted the years as well as the trendline in Excel based on the last column in that table. 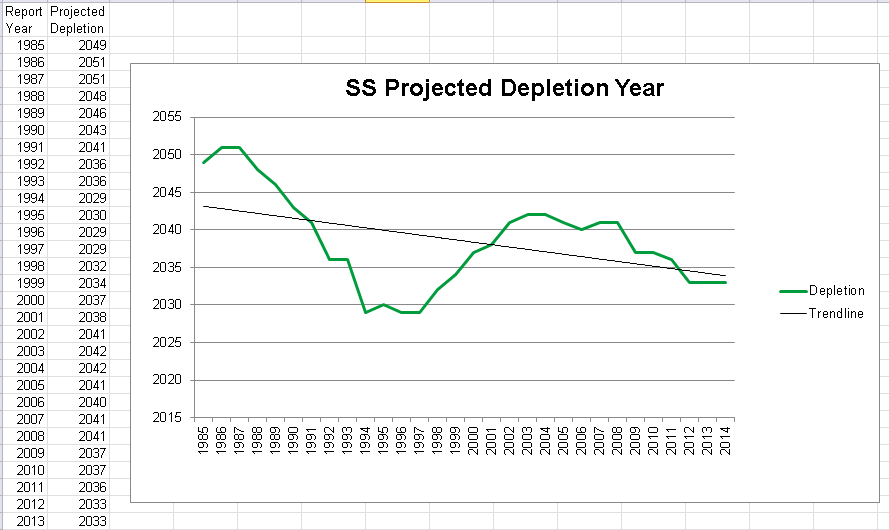 I tried to answer this question previously, and received a considerable amount of criticism. @DVK Yes, your understanding of financial terms is correct. However, Social Security does not use terms as you think it does. Solvency in Social Security considers the cashflows over 75 years. You can see this on page 159 of the Trustees Report. Social Security was solvent in 1983 and is not in 1985 and later. It is a definition within Social Security.

DVK, I am not confusing solvent and solved. In fact, I separated the meanings clearly. Many people confuse these words because solvent does not mean in Social Security what it means in finance - as immutable the meaning there it may have. Social Security has its own accounting standards that are not like anything you have worked with. If it did, Social Security would be insolvent today with liabilities in excess of assets of 24.9 trillion - see page 192 of the 2014 Trustees Report.

10
Are reservations/Affirmative action programs successful at alleviating financial conditions/social standing?
17
Is Social Security a Ponzi scheme?
36
Are there enough unused houses in America for each homeless person to have six?
72
Does Melania Trump's security cost double the National Endowment for the Arts' budget?
8
Did 20th-century Marxists acknowledge that the central social predictions of Marxism were wrong?
17
Does Social Security have a $2.5T surplus?
2
Does illegal immigration in the usa strain social services?
10
Was it ever common in the USA for women to use their husbands' Social Security Numbers as their own?
9
In 1984, was the top income tax rate lowered from 70% to 28%,and was Social Security then taxed for the first time?