In the Wikipedia article on multilingualism (the use of more than one language by an individual or community), I read that:

The link reference was broken but finding the correct source wasn't difficult. They quote a work by G. Richard Melon, Paul Mellon University Professor of Applied Linguistics: "A Global Perspective on Bilingualism and Bilingual Education".

Fewer than 25% of the world's approximately 200 countries recognize two or more official languages, with a mere handful recognizing more than two (e.g., India, Luxembourg, Nigeria). However, despite these conservative government policies, available data indicate that there are many more bilingual or multilingual individuals in the world than there are monolingual.

I don't have access to the full work and the digest doesn't disclose what that "available data" he used was and how he reached to that conclusion.

My first thought after seeing your question was surprise that it was being asked, as I had heard the claim previously, and found it so much in agreement with my experience that I had assumed it true. However the evidence is actually rather more interesting than I would have guessed.

1. There are fewer fluent bilinguals than monolinguals in the world

I'll start with the common sense argument you asked for: My experience is that anyone under 40 in Europe is likely to speak English, anyone I meet from India or Pakistan speaks English plus Urdu or Hindi, and significant fractions of the population in the US and China speak at least two languages (Often Spanish in the US, English and/or at least two Chinese dialects in China).

However, looking into it more formally, it seems there are some problems with the definition of "speaking" a second language. This article has an interesting summary of the issues that arise in counting multilingual individuals. For instance, in the US, you're multilingual if you have some level of basic proficiency in a second language. In Switzerland, you're multilingual only if you have something like native proficiency in at least two. While most Swiss people I've met speak excellent English, as well as Swiss German and High German (indeed, most of them have received multi-year formal education in French, English, and High German), apparently most of them would claim to be monolingual on a census form.

After floating around google scholar for a while, I conclude that these sorts of ambiguities on the parts of governments mean there isn't a good scientific estimate. We won't be able to get the exact numbers.

Fortunately, someone else already has made a good effort at an educated guess for fluent bilinguals, and is cited widely in the literature I did read. In 1997, George Weber published an article in a semi-scholarly setting on the relative "strength" of different languages. You can read a copy of it here. Among other things, this article considers a number of different estimates of the number of speakers of each language, including the total number of secondary speakers for the most popular ones, and presents a sort of "consensus" estimate from these different sources. This consensus estimate is widely cited elsewhere in the scholarly literature, despite it not being from a truely scholarly source. Here's the pertinent graph: 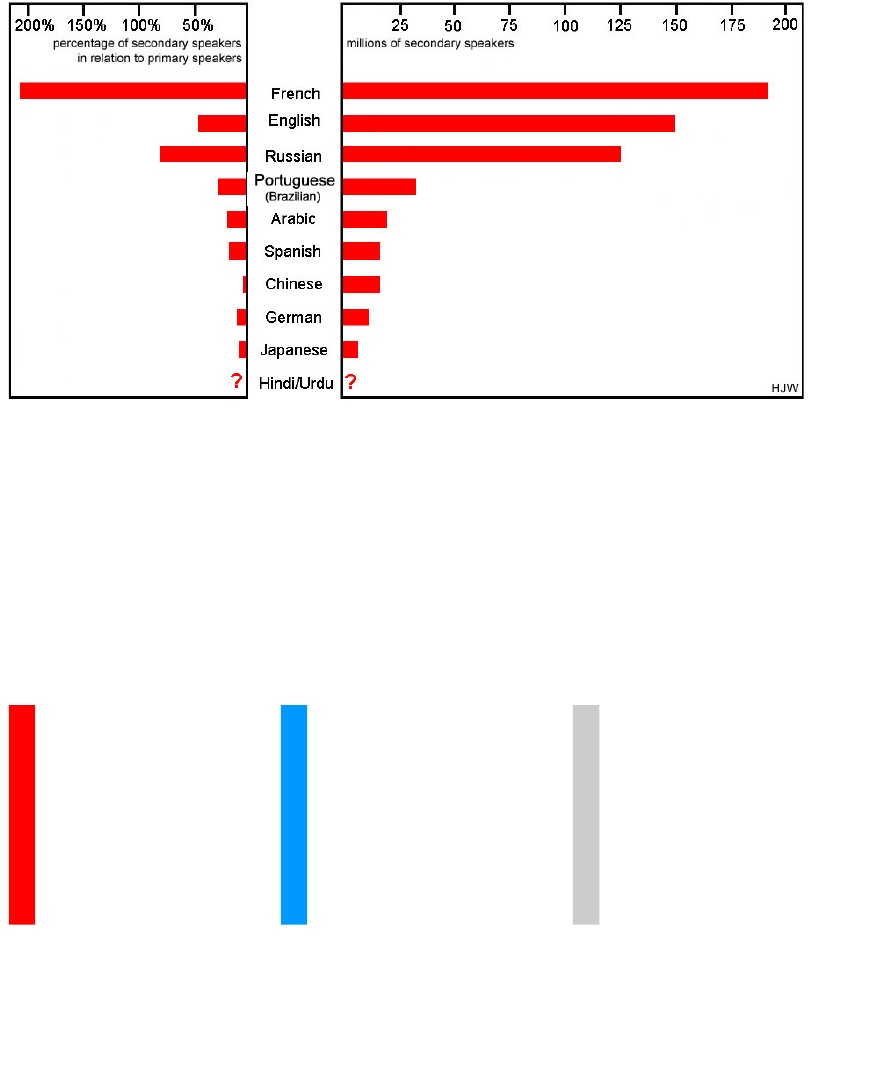 I ballpark the total number of fully fluent secondary speakers of these languages at no more than 700 million based on the chart above. Wikipedia's figures suggest that this number could be as high as 1.5 billion, but that's still far short of the 3-3.5 billion needed.

Since Lewis gathered his statistics in "the early 1990's", when the world had a population of a little more than 5 billion, we can conclude that, for this stringent definition of bilingualism, there are far fewer bilinguals than monolinguals.

However, other sources which use more relaxed definitions like "use at least 2 languages per day" offer evidence for why this claim exists. For example, this recent book (preview only) is cited by others in support of this claim. However, I can't find a good scholarly source for this claim that I can actually read. I rate it as "probable", given that something like a quarter of the world is bilingual under the very strict definition above. For instance, under this definition, my 10 hours of duolingo french, which I use to tease my wife (who is fluent in french) would possibly qualify me as "bilingual". I might only say a few sentences per week in French, but this isn't a high bar, and I might claim "daily" use if the question was phrased correctly.

Not the answer you're looking for? Browse other questions tagged linguistics .

38
Are Americans more likely to be monolingual?