Are smartphones, keyboards, and tablets more contaminated with Staphylococcus aureus than a public toilet seat?

Source: How clean is your iPad? – a “Which?” hygiene investigation

We use them every day while eating lunch or a snack, but new Which? research has revealed tablets, smartphones and keyboards may have more bacteria lurking on them than an office toilet seat. 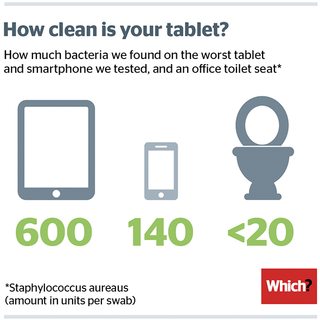 British watchdog Which? claims that our smartphones, keyboards, and tablets are more contaminated with Staphylococcus aureus than a public toilet seat.

Since it seems a bit exaggerated, I wonder whether it is true.

The claim's numbers of 600, 140, and 20 need to be put in context. The 600-count was on a "particularly dirty tablet", not the typical tablet. They go on to say the "typical toilet seat we tested had a Staphylococcus count of less than 20 units". That greatly weakens the claim, but the general message it conveys is supported by other studies.

In (Scott 2009), they counted occurrences of "coagulase-negative (CN) Staphylococcus sp, methicillin-sensitive Staphyloccus aureus (MSSA) and MRSA, Pseudomonas sp, and members of the Enterobacteriaceae." The 25th percentile, median, and 75th percentile counts for the surfaces in question were found to be:

Those two studies don't directly address the exact claim in question. They compared toilet seats to fixed household and office phones, not mobile phones. (Scott 2008) only looked at percentage of surfaces that were contaminated, not bacterial counts, and (Scott 2009) reported bacterial counts, but not isolated to Staphylococcus aureus. However, the claim in the question is not contradicted by these studies' findings. For example, the kitchen phones were found to have a higher bacterial count (across all species of interest) than the toilet seat.

(Walia 2014) gives an explanation: "they come into contact with more parts of our body and a wider range of bacteria than toilet seats", and "this type of bacteria multiply at high temperatures and our phones are perfect for breeding these germs, as they’re kept warm and cozy in our pockets, handbags and brief cases".

The bacterial contamination of mobile phones is a recognized risk in the clinical setting. (Visvanathan 2012) says, "It is concerning that these devices have been found to harbor such a variety of multidrug-resistant pathogens", and "Mobile phone decontamination to reduce the risk of cross contamination has been widely advocated." Only 50.9% of patients "had ever cleaned their phones".

What should you do about this? Just use an alcohol wipe. "Decolonization with 70% isopropyl alcohol is simple, cheap, and induces a proven significant reduction of bioburden in most reported studies" (Visvanathan 2012).

Not the answer you're looking for? Browse other questions tagged hygiene mobile-phones .

21
Is talking and driving more dangerous than any other type of distraction?
60
Is cleaning yourself with toilet paper cleaner than using water?
18
Is chewing your finger nails as bad as licking a public toilet seat?
6
Are bugs and other pests “crawling with disease”?
5
Are eggs more likely to contain salmonella in the yolk than the white?
19
Are women's public restrooms dirtier and/or more bacteria-laden than the men's rooms?
38
Does washing hands with soap remove more germs than plain water?
11
Are antibacterial soaps better than plain soap and water?
5
Are people more careless with their mobile phones when an upgrade is due?