In this video of a presentation given at a climate-skeptic Heartland Institute conference, Don Easterbrook presents his view of recent climate history. He compares his own projections of future climate with IPCC forecasts and claims them to be superior since about 1999.

This comparison has been debunked (see this SkepticalScience post) as a misrepresentation of IPCC results.

But, more interestingly, Easterbrook also presents paleoclimate reconstructions based on oxygen-isotope analysis of ice cores which he claims show both much higher and much lower temperatures in the past 15,000 years than other, more widely accepted paleoclimate reconstructions (the key discussion starts around 3:32 in the video). In particular he claims that the ice-core data are better at showing the well-known medieval warm period and the little ice age than tree ring proxies for temperature but also show periods over the last few thousand years that are significantly warmer than present.

This is clearly a contrarian view compared to the current mainstream consensus on historic climate (often dominated by tree-ring temperature proxies for the last millennium-ish). So are his ice-core based temperature reconstruction credible? and if not, why not?

NB please let's keep the discussion to the question of O2 isotope analysis of ice-core data and not get diverted into ad-hominem attacks on Easterbrook's other opinions.

Easterbrooks main argument here has already been discussed at Skeptical Science, the article is here. There are two main errors, the first is to treat Greenland as if it were representative of global temperatures. The second, more important error is that apparently it is conventional in this field to treat 1950 as the "present" in this kind of study.

There are three main timescales used on the CD-ROM. For both GRIP and GISP2, these timescales are in years before present (yr BP) where year 0 refers to northern hemisphere summer of the year 1950 A.D. For example, year 1989 (summer) is be referred to as the year "-39 yr BP" on this CDROM, following the convention of the radiocarbon dating method (see e.g. Stuiver and Reimer, 1993). It should be noted that, in general, GRIP publications have not used the A.D. 1950 convention. (source)

The author of the SkS article updated the plot of the GISP2 ice core temp series, to add observed temperatures for 1855 and 2009 from another greenland temperature reconstruction (updated) from 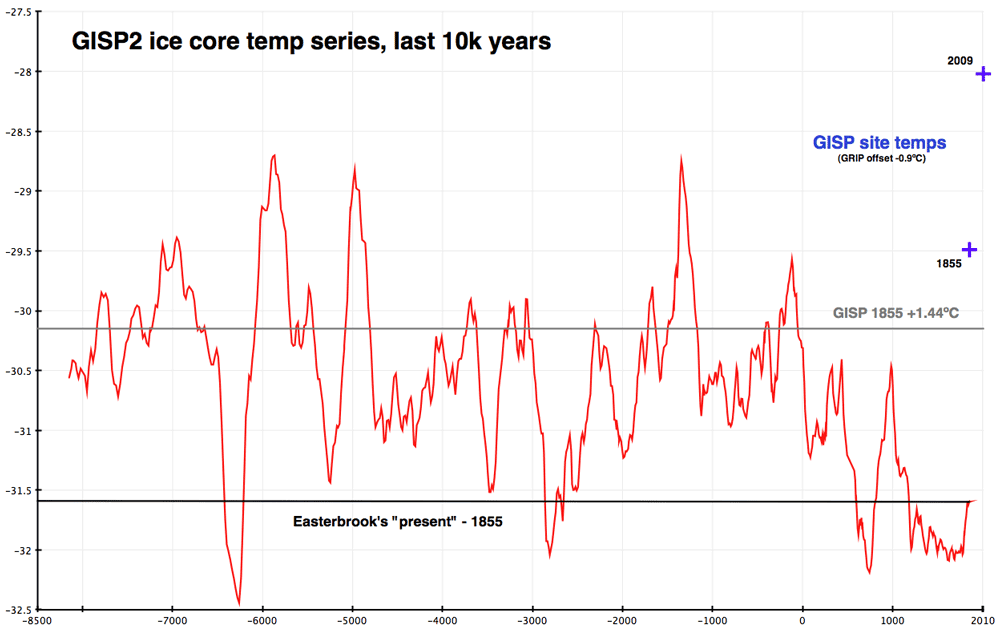 The main canard implied in Easterbrook's video is the idea that because there have been large changes in (especially regional) temperature in the distant past, when there were no anthropogenic carbon emissions, then carbon emissions now are not causing the changes in temperature. This is a non-sequitur as both anthropogenic and natural forcings affect the climate, and climatologists know this and take it into account in their studies. They have also studies past changes in climate, such as the Younger Dryas, indeed such events are helpful in the understanding of climate.

Not the answer you're looking for? Browse other questions tagged climate-change geology climatology .

15
What are the greatest successes of long term climate prediction?
13
Are the IPCC climate change models overestimating sensitivity to carbon dioxide?
4
Is global temperature significantly affected by time of galactic year?
1
Oxygen buildup in the atmosphere
0
Does Beck's chemical analysis of CO₂ discredit the Law Dome ice core findings?
5
Does temperature drive CO₂?
25
Will global warming reduce available oxygen?
15
Whose account of the response to Michael Mann's original "hockey stick" analysis is correct?
3
Why did the value for "average surface temperature of Earth" change from 15°C to 14°C in some scientific literature concerning climate change?