Questions about unresolved current events and issues currently under investigation by a court of law, government, or other similar investigative body are off-topic because there is insufficient data for a meaningful answer. For more information, see Handling current news questions.

"We have striking evidence obtained from Yazidis fleeing Sinjar and some who escaped death, and also crime scene images that show indisputably that the gangs of the Islamic State have executed at least 500 Yazidis after seizing Sinjar," he said

"Some of the victims, including women and children were buried alive in scattered mass graves in and around Sinjar."

Is this true? If so, where is the evidence?

Reset to default
6
Want to improve this post? Add citations from reputable sources by editing the post. Posts with unsourced content may be edited or deleted.

The twitter account which supports Islamic state news has released a document which states that this and many other news reports spread by Iraqi officials were false, and implies that the Iraqi government intended that the reports should bring America into the war.

The document includes tweets from an independent investigator which concur that reports of the massacre were false: 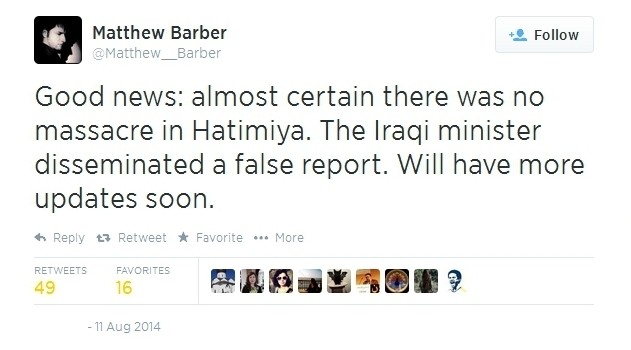 The document also links to refutation of other stories:

Many lies that originated from Kurdish Media and Activists DEBUNKED

There is a twitter hashtag devoted to refutation of such rumors.

The Huffington Post article is based on this 'exclusive' Reuters report dated "BAGHDAD Sun Aug 10, 2014 8:00am EDT", which contains the sentence you quoted, i.e.:

"We have striking evidence obtained from Yazidis...".

However this slightly later article by CNN dated August 11, 2014 (Updated 1746 GMT), quotes a close (but not identical) source, i.e. this time a "spokesman" from the Iraqi human rights ministry rather than the minister himself, as saying,

On Sunday, Iraqi Ministry of Human Rights spokesman Kamil Amin said it was possible that as many as 500 Yazidis had been killed. The ministry had also heard reports -- but had not confirmed -- that some had been buried alive.

"It's difficult to be accurate about these numbers, but initially we have reported 500 Iraqi Yazidis have died from either ISIS direct killings or from starvation and dehydration," Amin told CNN. "We have heard some reports from activists and local journalists that some families were buried alive."

CNN is unable to authenticate reports regarding the Yazidi death toll or the allegation that some were buried alive.

Instead of the original "we have striking evidence" he is now being quoted as "we heard unconfirmed reports".

You asked, "Is this true? If so, where is the evidence?"

This answer cannot tell you whether the reports are true: I posted this answer because it clarifies the evidence on which the claim was made (i.e. that the evidence was, allegedly, unconfirmed reports from activists and local journalists; and that CNN was unable to authenticate the reports).

28
Did Snowden reveal that ISIS is a USA-Israel tactic?
21
Is ISIS beheading children in Mosul, Iraq?
18
Did Senator McCain ever meet ISIS leader al-Baghdadi?
19
Did Hillary Clinton admit in her memoirs to creating ISIS?
1
Did Muslim women lose property rights during the British colonial rule in India?
15
Is this graphic comparing punishments between ISIS and Saudi Arabia accurate?
8
Did 16% of French citizens support ISIS in 2014?